Will It Blend or Deduct? 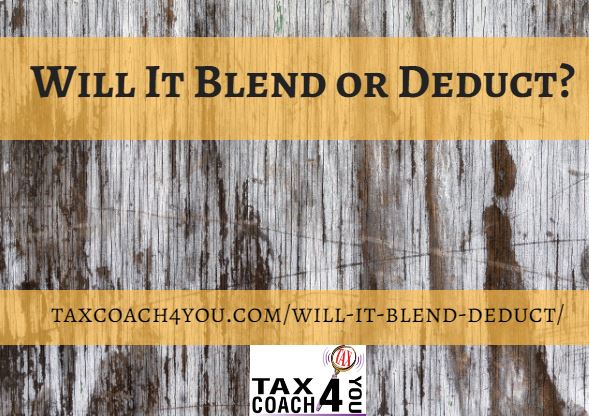 If you’ve spent any time on the internet, you know it’s a vast rabbit hole of places to waste precious minutes of your life. “Will it Blend” is one of those places, a video series showing off the Blendtec line of blenders. The videos feature the company’s founder, smiling in a white lab coat and safety goggles, dropping the day’s experiment into one of his company’s appliances. Not surprisingly, avocados, credit cards, and an Big Mac Extra-Value meal all blend just fine — but iPhones, golf clubs, and an English-German dictionary on CD-ROM don’t fare nearly so well. (“Don’t try this at home,” they warn.) Deduct

Taxpayers play a similar game. It’s not as fun to watch as a Justin Bieber doll in a blender, but it’s potentially far more profitable. That game, of course, is “Will it Deduct?” The results don’t go viral in the same way as the “Will it Blend?” videos. But they do wind up on the internet, in the form of Tax Court opinions. Deduct

This week’s “Will it Deduct” story features Herbie Vest, a CPA who launched an investment advisory firm for fellow CPAs. He took the company public and stayed on until 2001, when he sold out to Wells Fargo for $125 million. By that point, he found himself looking for a new challenge in life. He found it in his own past. When Vest was just two years old, his father was found hanging in the bathroom of his Texas shop. Investigators ruled it a suicide. But in 2003, he received an anonymous letter alleging murder. So Vest began investigating this coldest of cases. Deduct

Vest spent $6.4 million, pursuing the case as doggedly as any fictional detective. In 2007, he tried to salvage that effort with a book or movie, hiring a writer to tell his story and a PR firm to market it. But Vest never found a killer, and the story never found a buyer.

You can probably guess what Vest did with his pile of bills. That’s right, he played “Will it Deduct?” The IRS pureed his claim on the grounds that he hadn’t embarked on his effort for profit. So he applied for a do-over and took his case to the Tax Court. Last week, the Court released its opinion. Would Vest’s deduction fare better than a toilet plunger in a blender? Here’s what the judge said:

“By January 2008 [Vest] had been investigating his father’s death for five years. As of that time, his investigative activities had not generated a single dollar of revenue. Those activities generated no income during 2008, 2009, or 2010, and [Vest] had no reasonable prospect of generating future income. Petitioner never developed a business plan for commercializing his father’s story. He has no professional background in writing, book publishing, or media. He did not modify the scale or scope of his investigative activities during 2008-2010 in an effort to minimize the substantial losses he was incurring.”

Sadly for Vest, his investigation did not deduct, and now he owes the IRS $4 million in tax.

Don’t let Vest’s disappointment stop you from playing “Will it Deduct.” Section One of the tax code imposes a tax on every taxpayer and sets forth the various rates. Think of it as a “red light” on the road to financial independence. But the rest of the code outlines hundreds of exceptions to that tax — the deductions, credits, loopholes, and strategies that give a “green light” for taxpayers to pulse, chop, and liquefy their tax bills. So call us to take advantage of those green lights. And remember, we’re here for your family, friends, and colleagues too!