Soup Nazi – No Soup for You! 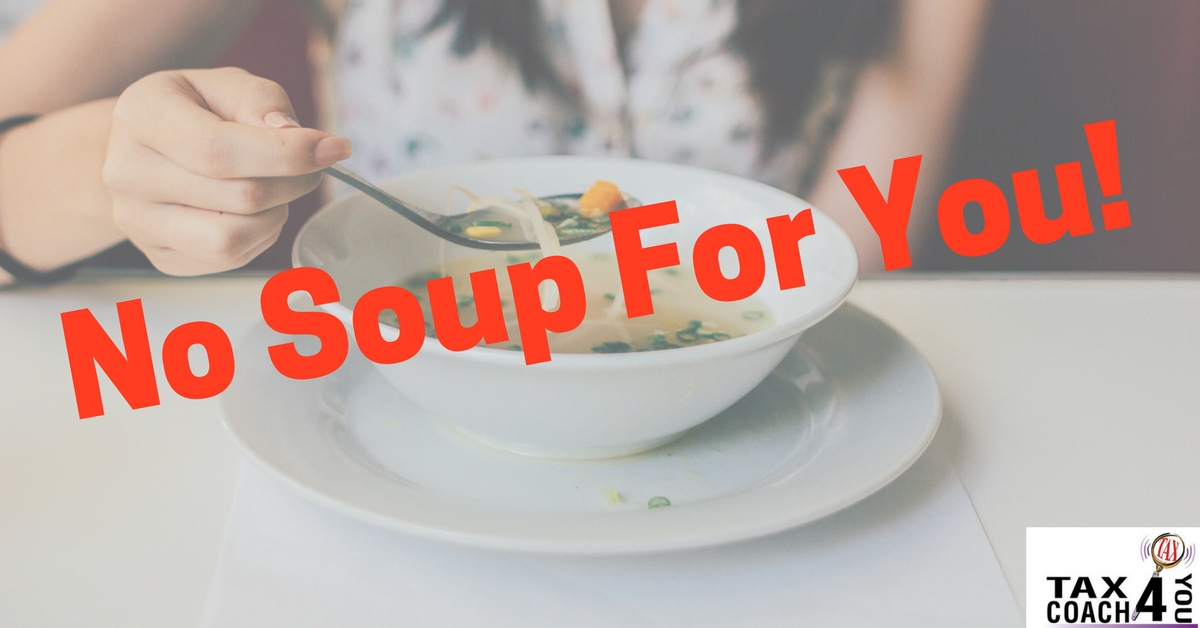 November 2nd, 1995, was a delicious day in television history. That’s when Jerry Seinfeld and the rest of his gang introduced us to the “Soup Nazi”, a stern-looking chef who demands his customers follow his obsessive rules for lining up and ordering. The Soup Nazi didn’t win any awards for customer service, but his soup was so good that customers lined up around the block for it anyway. The episode scored an Emmy for Larry Thomas, the actor who played the character. And it led to fame and fortune for Al Yeganah, the real-life “Soup Nazi” who operated a restaurant on Manhattan’s West 55th Street that the character was based on.

Fast-forward to now. The Original Soup Man, based on Staten Island, has bought the rights to the Soup Nazi’s name and his recipes. The company manages three locations plus an online operation, and its stock even trades on the over-the-counter market (under the symbol SOUP, naturally). But all is not well in Soup Heaven. The company faces financial problems that no amount of Lobster Bisque or All-Natural Gluten Free Lentil can solve. So the Soup Man found himself borrowing some gold “bouillion” from our friends at the IRS.

Here’s the scoop. Employers are responsible for withholding income tax and payroll tax from their employees’ wages. They’re also responsible for spooning out their own share of payroll taxes on those wages. Employers who find themselves in financial trouble sometimes “borrow” from the IRS by failing to make those deposits. (Just until business gets better, they tell themselves. Right . . . . ) Failure to pay those taxes deprives the government of much-needed revenue, of course. And it cheats those employees out of future social security benefits.
For those reasons, the IRS is even more obsessive about collecting payroll taxes than the Soup Nazi is about ordering his soup. When employers fail to pay, the IRS springs into action. They can hold “responsible persons” with an ownership in the business or signature authority over its accounts personally responsible for payment. They’ll happily hit you with penalties equal to 100% of the tax not paid. And they have no problem souping up the pressure to hold you personally liable even if you had no idea the taxes weren’t being paid. (Did you just discover your payroll service made off with the money? Stinks to be you . . . ladle up!)

You can probably see where we’re heading. On May 23, federal prosecutors indicted Soup Man’s chief financial officer, Robert Bertrand, on 20 counts of failing to pay. They reported that from 2010 to 2014, he paid some employees in unreported cash, and others in unreported stock awards to the tune of $2.8 million. And they alleged that his actions fleeced the government out of $593,971.52.
Bertrand pled not guilty and walked out of court on $50,000 bond. But he’s stewing at the thought of five years of meals in a place where the soup probably isn’t very tasty. And he’ll have a hard time pleading ignorance — the indictment reports that his outside auditor warned him as far back as 2012 that he needed to report those payments. (At least you can still buy the soup on Amazon.com!)

Fortunately for the rest of us, there’s no need to risk years of watery, tasteless soup in order to pay less tax. You just need a plan. That’s where we come in, and we can promise better service than the Soup Nazi. Call us when you’re ready to discover our recipe for Savings Gumbo!