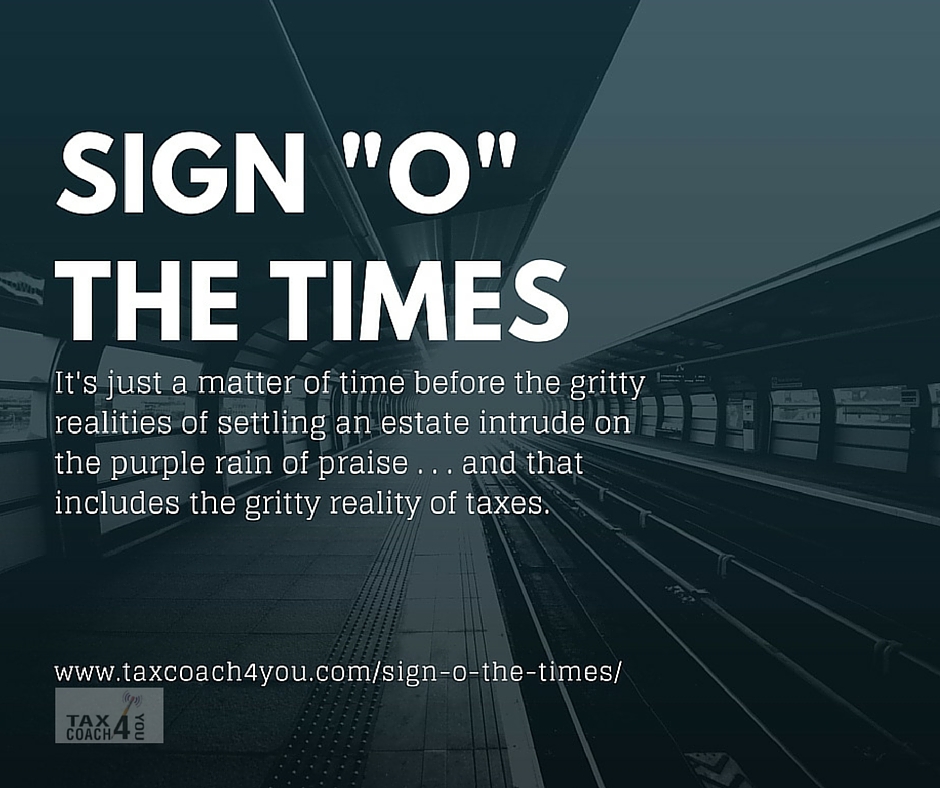 The artist forever to be remembered as Prince shocked the world with his unexpected death last month at his Paisley Park compound outside Minneapolis. As is often the case when legendary musicians pass away, his album sales have soared. Fellow artists from Bruce Springsteen to the cast of the Broadway smash Hamilton quickly honored the seven-time Grammy award winner with their own versions of his iconic hits. But it’s just a matter of time before the gritty realities of settling an estate intrude on the purple rain of praise . . . and that includes the gritty reality of taxes.

Like many chart-toppers, Prince was a control freak when it came to his sound and his career. Apparently, though, that planning didn’t extend to his finances — last week, his sister filed papers with a Minnesota state court revealing he had left no will.

So who gets the assets, and just how much are we talking here? Well, Prince had no wife when he died, and his parents had already passed away. Under Minnesota law, that means his sister and five half-siblings stand to inherit his fortune. Most reports estimate there will be around $300 million to share . . . which should be enough to keep everyone rolling in little red corvettes for the rest of their lives.

Of course, that assumes that everything goes by the book. Already there are reports of would-be love children slithering out of the shadows, and Prince’s half-brother Alfred has hired an attorney to represent him after being barred from last week’s memorial. That may mean it’s the accountants and attorneys who get to party like it’s 1999.

Settling the estate without tearing it apart is just half the battle. That $300 million comes before taxes. The IRS takes 40% of everything above $5.45 million. The Gopher State takes another 16% of everything over $1.6 million. A little fourth-grade arithmetic suggests the tax man can go crazy with $150 million or more.

We can probably expect a fight over the exact amount due. Estate taxes are based on valuation, not income. So who’s to say what Prince’s name and image are “worth”? What about a vault of 2,000 unrecorded songs? What about the unpronounceable “love symbol” he adopted instead of a name to spite his record label? How much would Pepsi pay to make a commercial starring a holographic image?

That’s all before the tax man takes a bite out of the millions more in future royalties that his estate will certainly earn. Prince’s rival Michael Jackson earned $115 million last year, despite dying way back in 2009. Elvis Presley hasn’t recorded since Jimmy Carter was President, yet his estate earned $55 million last year thanks to ticket sales at his Graceland mansion. No one remembers the last time Elizabeth Taylor performed without embarrassing herself, yet her estate earned $20 million last year from her fragrance line. It’s enough to make you think that dying is just some sort of extreme viral marketing stunt.

The good news, at least for Prince’s heirs, is that he was rich enough to survive his failure to plan. But are you? Failing to plan for your legacy can be the most expensive mistake you ever make, and could throw your heirs into years of struggle and grief. So call us to help make sure that doesn’t happen!