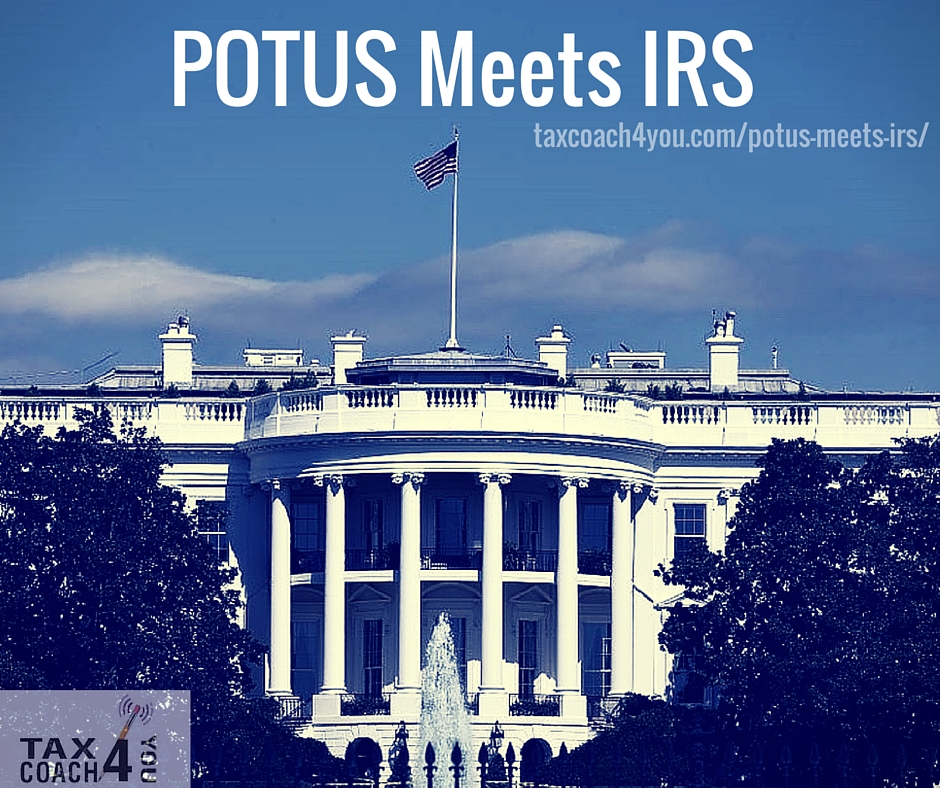 For most of us, filing a tax return is a fairly private affair, just between us and our friends at the IRS. But for President Obama and his family, it’s a high-profile event. Last week the White House posted the Obamas’ return online, and it reveals a lot about how the tax laws apply at the highest levels.

The President’s base pay is $400,000 per year, the same as when he took office seven years ago. When he talks about American workers not getting pay increases, he really does feel their pain! (He’s not the only one in Washington with that complaint; Congressional salaries have also been frozen since then.)

Of course, the job comes with some pretty nice tax-free perks. There’s a nice white house on 18 acres of prime Pennsylvania Avenue real estate, with a fenced yard, vegetable garden, and tennis court. Zillow says it would rent for about $2 million/month. There are a couple of nice private jets for trips to see foreign leaders around the world. There’s a nice helicopter just to get from the nice white house to the nice jets. And there’s a $50,000 entertainment allowance for hosting the friends he makes on those trips around the world.

The President also earned $348 in taxable interest, $9 in taxable dividends, and $3,000 in capital losses. Finally, he earned $56,069 in net business income from book royalties. That’s way down from 2009, when Dreams From My Father and The Audacity of Hope raked in $5.2 million. Those revenues have dropped every year since he took office, and his current income is barely enough to put him in “the 1%.” On the bright side, the self-employment income let him stash an extra $11,064 into a self-employed retirement account.

On Schedule A, the Obamas included $18,390 in state and local income taxes, $30,167 in property taxes, $36,587 in mortgage interest, and a generous $64,066 in charitable contributions. However, there’s a phaseout on itemized deductions starting at incomes over $309,900, which limits their actual deduction to just $145,545. That isn’t the only phaseout that hits the Obamas . . . their income level means no child tax credit for daughters Sasha and Malia, and the Personal Exemption Phaseout costs them $16,000 in personal exemptions they could otherwise claim.

The First Family finishes with $290,640 in taxable income and $71,440 in tax. But wait . . . there’s more! The Alternative Minimum Tax wipes out those state and local tax deductions and costs the Obamas an extra $7,743. The President owes $1,502 in self-employment tax on his book earnings. He also owes $1,766 in additional Medicare tax imposed, starting in 2013, by his own Affordable Care Act. (“Thanks, Obama!”)

The Obamas signed their return on April 7. Under “Occupation,” Barack listed his as “US President” and Michelle listed hers as “US First Lady.” So where is her income in all of this? Nowhere to be found! Realistically, the Obamas won’t ever have trouble making ends meet. But fans of the First Lady’s work argue that failing to pay her sends a terrible message about paycheck equality. Even former President Ronald Reagan, who probably would have opposed today’s paycheck fairness legislation, once quipped that with his wife Nancy, the government “gets an employee free.”

Here’s what may be the most surprising fact about the Obama’s taxes: they paid too much. Granted, the President is in a unique position of having to demonstrate strict compliance with the law. But his 1040s over the years reveal plenty of perfectly legal missed opportunities to pay less. Fortunately, you don’t have to publish your return every year, so you can take advantage of every legal strategy. Call of for a plan and we’ll show you how!