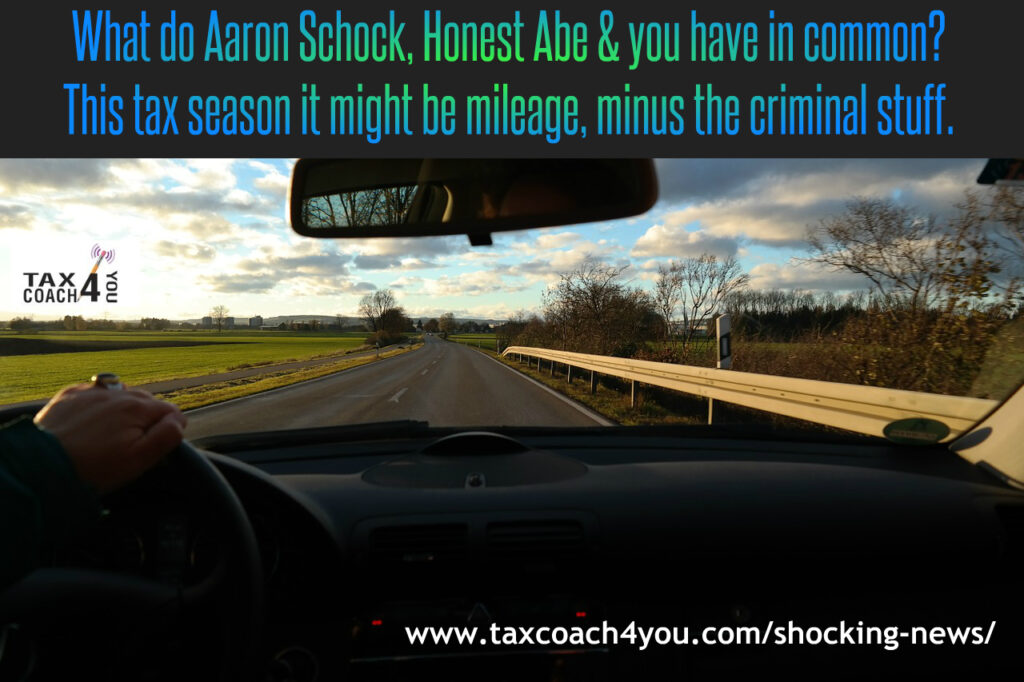 This time of year, taxpayers across America are scrambling to put together their last year’s mileage records. First you’ve got to total up how many miles you drove for your trade or business. Then you’ve got to add up all the costs of operating your vehicle — depreciation, interest or lease payments, gasoline, maintenance and repairs, registration, and even your satellite radio bill. Then you’ll multiply those expenses by your “business use percentage” to calculate your actual deduction. (Are we having fun yet?) Alternatively, you can just take the IRS standard mileage allowance, which stands at 57.5 cents per mile for 2015. Problem: it’s the same amount for every car on the road, from gas-sipping Priuses to road-hogging SUVs. And you still have to track your miles. But at least it avoids the hassle of tracking all those receipts!

Keeping good mileage records can be important even if you’re not just looking for more tax deductions. Illinois Representative Aaron Schock learned that lesson the hard way last week. The Congressman was already under fire for dropping $40,000 to decorate his office, Downton Abbey-style, and for accepting favors like private plane trips from well-heeled donors. Then we learned his mileage didn’t add up. From 2010 through 2014, he billed Uncle Sam and his campaign for 170,520 miles he put on his Chevy Tahoe. But when he traded in the truck last year, there were only 81,860 miles on the odometer. Oops! Schock resigned his seat just hours after the story broke, which means he’ll get to spend more “quality time” with his attorneys. (Yeah, another Illinois politician looking at a ride on the Incarceration Express — we were stunned, too.)

Schock is hardly the first politician to find himself in hot water over expense reimbursements. So who was the first? (No, not Martin Van Buren, but that’s an awfully good guess.) Back in 1816, Congress began reimbursing members 40 cents per mile for travel between home and Washington “by the usually traveled route.” And how did Congress arrive at that rate? Did they carefully calculate the cost of depreciating the buggies, boarding and feeding the horses, and oiling all that antique brass hardware? Well, not exactly. Congressmen made $8 per day back then. Apparently some enterprising clerk in the post-colonial equivalent of a windowless cubicle acknowledged the conventional wisdom that a Congressman could travel 20 miles a day. Then he took a quill pen to foolscap, divided those 20 miles into $8, and came up with 40 cents per mile.

By 1848, though, steamships plied the waters and railroads were fast replacing canals. The 40 cent rate was a relic. And Horace Greeley, editor of the New York Tribune and a Congressman himself, was outraged. On December 22, 1848, he released an expose blowing the whistle on those who claimed more miles than they really traveled. And who should we find on that list? Sandwiched between future Vice-Presidents Hannibal Hamlin and Andrew Johnson, was a one-term Whig from Aaron Schock’s old district named Abraham Lincoln, who claimed $677 in excess reimbursement. That may not sound like much, but it works out to about $18,700 in today’s dollars.

The “mileage swindle” scandal, as Greeley dubbed it, would have made a great story on House of Cards. Congressman after Congressman took to the floor to denounce Greeley in colorfully florid nineteenth-century style. (This was the era of “the caning of Charles Sumner,” after all.) The House passed a bill limiting miles to “the shortest continuous mail route,” and Congress lowered the rate to 20 cents. But even today, members of Congress still get a pretty generous travel allowance. Current rates range from 96 cents to $1.32 per mile — pretty sweet, compared to what our friends at the IRS give us.

What do you think? Should young Representative Lincoln have resigned his seat over his inflated expenses? Or was his future bright enough to justify giving him a second chance?

Ironically, once “Honest Abe” eliminated his own mileage entirely (by moving into a big white house with a convenient home office), he signed the first federal income tax into law. But if Lincoln hadn’t done it, someone else would have. Either way, you’d still want to pay less, if you could, and we’d still be here to give you the plan to do just that. So call us when you’re ready for that plan. And don’t forget to deduct the miles you drive to get here!