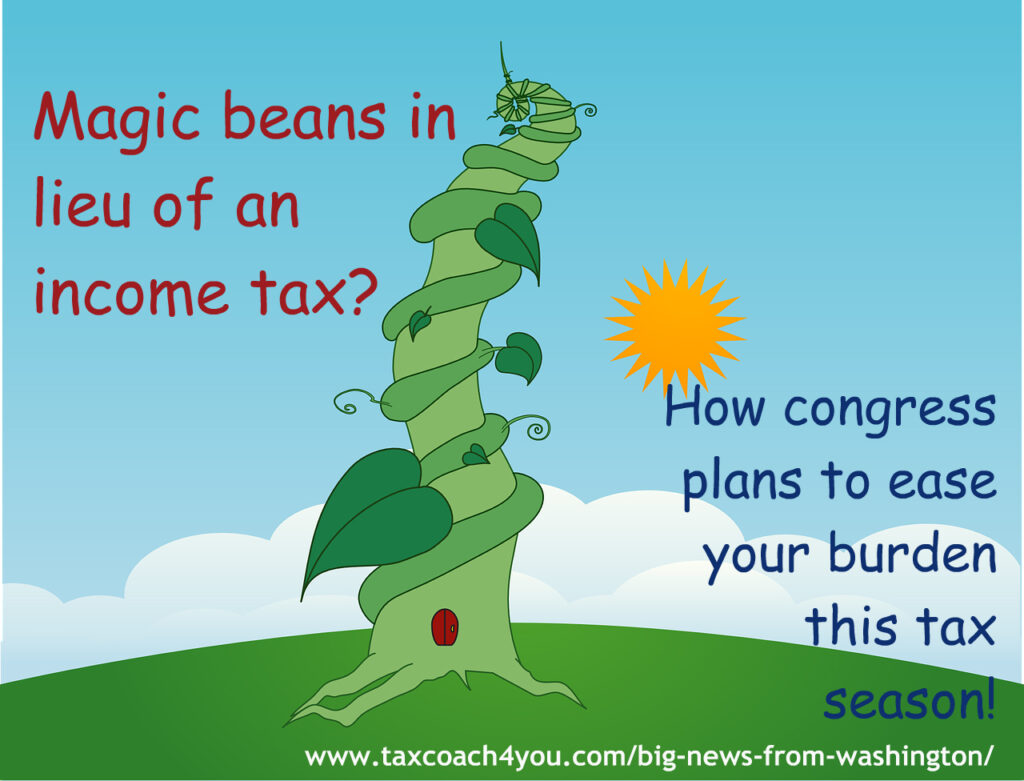 Americans have been complaining about income taxes since the IRS unleashed the first Form 1040 on us back in 1913. Sure, we all hate paying them. But as the tax code has ballooned to twice the length of the Bible (with none of the good news), preparing them has become just as big a problem. As Albert Einstein once put it, “the hardest thing in the world to understand is the income tax.” And if Einstein couldn’t wrap his enormous brain around those ridiculous Alternative Minimum Tax depreciation rules, what chance do the rest of us have?

Today, House Ways and Means Committee chair Paul Ryan (R-WI), along with Ranking Minority Member Sander Levin (D-MI), introduced their attempt to kill both of those birds with one stone: House Resolution 1040, the “Revenue Reform and Restructuring Act of 2015.” As its name implies, the bill is a rare bipartisan effort to repeal the current income tax system completely — and even eliminate the dreaded Internal Revenue Service.

“We know that everyone hates paying taxes,” Chairman Ryan said at a press conference announcing the bill. “But the way we calculate and collect them just adds insult to injury. Former President Jimmy Carter once called our tax code ‘a disgrace to the human race.’ I’m hardly a Jimmy Carter fan,” the Chairman added. “But he was sure right about that.”

“Look, folks, we’re not stupid,” said Representative Levin (as the assembled press corps snickered). “We’ve all seen the polls showing Congress is less popular than hemorrhoids, potholes, and dog poop. But can you guess what Americans hate even more? Just kidding — you’ll totally guess, because it’s the tax code. And we’re the ones who wrote it! So we asked ourselves, what can we do to solve the tax problem and restore our good name?”

The answer, of course, is to scrap the bloated income tax that so many Americans detest, and replace it with something completely new and different. But how to claw back that $2.2 trillion in revenue? The Committee debated various flat tax proposals, but those didn’t go far enough. They considered a sales tax or value-added tax, but that would fall most heavily on the poor. They even considered a carbon tax to discourage burning fossil fuels. Then the Texas delegation remembered that the Department of the Interior manages 155 million acres of public land for animal grazing. And those acres are filled with millions and millions of cows. Their idea: trade a few of those cows for some magic beans, and watch the beanstalks grow to the sky!

“Americans are hungry for something to unite around. They’re crying out for something they can all believe in,” said Ryan. “We’re hoping ‘Beanstalks to the Sky’ can join a ‘New Deal,’ ‘a Chicken in Every Pot,’ and ‘Give ’em Hell, Harry’ in America’s hearts and minds.”

IRS officials had no comment on the proposed legislation. However, one senior staffer, speaking off the record, said “We’re just as happy to get rid of those stupid tax forms as you are. But once we’ve transitioned to a beanstalk-based revenue system, they’ll need us all at the Department of Agriculture.” Across town at the White House, presidential spokesman Josh Earnest had even less to say — reports say that he stared blankly at a copy of Ryan’s speech and asked “Is this some sort of joke?”

What do you think? Are Ryan and Levin on to something? Is the “B.S.” (Bean Stalk) bill as credible as anything else coming out of Washington? Or are we just trolling you with an April Fools’ Day gag?

Either way, you know what’s really foolish? Paying more tax than you’re legally required! But until we really can pay our bills with magic beans, there’s only one way to pay less — and that’s to create a plan. So call us if you’re ready to pay less — and you’re not willing to wait for Washington anymore!