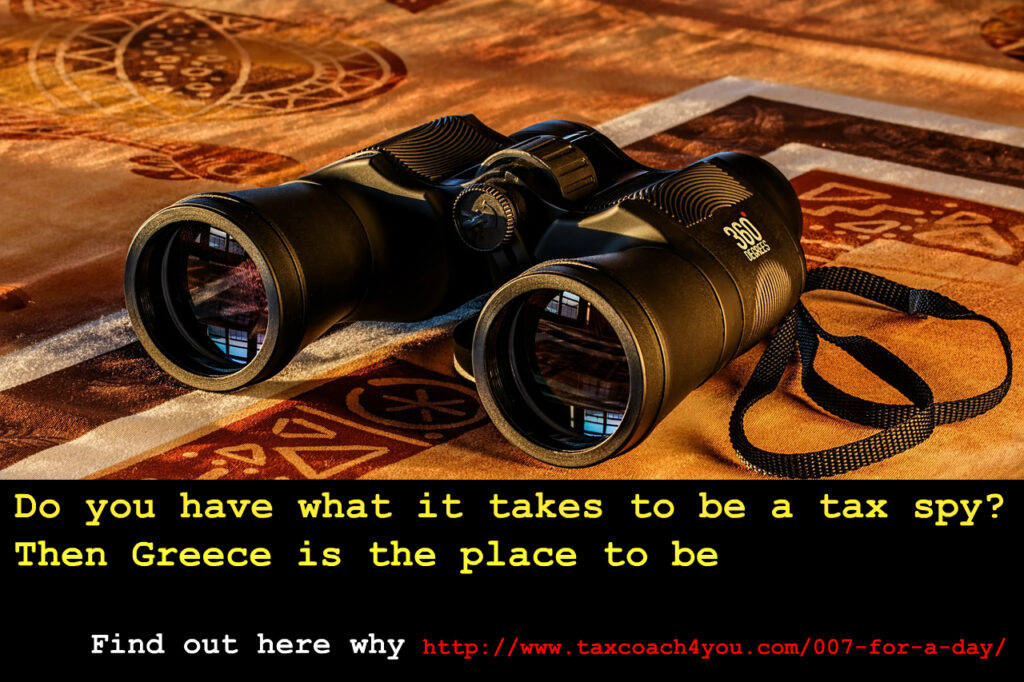 Who hasn’t wanted to be a spy at some point or another? Boys see their first James Bond movie, and they don’t want to be like 007 — they want to be 007. Girls learn how Mata Hari put her charms to work as a lethal double agent and think they can show the boys a thing or two. But sooner or later, most of us abandon that dream. And sadly, those job aptitude tests your high school guidance counselor makes you take rarely recommend “International Man of Mystery” as a career path.

But now, you’ve got the chance to finally realize that childhood fantasy. You don’t even have to hide out in some third-world danger zone to do it. You can be a spy in a sun-splashed Mediterranean paradise full of friendly, welcoming people. What’s not to love about that?

When you think of Greece, you probably think of Alexander the Great, the Acropolis, or the birthplace of democracy. But Greece is the national equivalent of the kid who peaked in high school, and Greek finances are a steaming pile of debt masquerading as a modern economy. Imagine an entire government that rushes down to the payday loan office right before closing every Friday, praying this week’s installment won’t get eaten up by last week’s fees, and that’s Greece. Seriously, don’t be surprised if you fire up the news tomorrow and see they’re trying to pawn the Parthenon.

Tax collections are a big part of Greece’s problem. Greeks hate paying taxes, even more than we do. In fact, some Greek banks admit using “adaption formulas” to estimate how much their self-employed borrowers can really afford, simply because so few of them tell their government how much they really make. The average self-employed Greek spends 82% of their monthly reported income repaying their loans. But some groups, including doctors, lawyers, and even accountants actually spend more on their mortgage payments than they admit making!

So Greece is desperate to avoid going broke. The government wants to start narrowing the “tax gap” between what they should be getting and what they really get. Last week, finance minister Yanis Varoufakis begged Greeks to start finally paying their taxes, pretty please, because it’s their patriotic duty. But just in case that doesn’t work, he’s planning to recruit “casual” tax spies, like tourists, students, housekeepers, and other nonprofessional’s, “to pose, after some basic training, as customers, on behalf of the tax authorities, while wired for sound and video.”

We’re not sure what sort of training you need to be a tax spy. The old-school techniques like “brush passes” and “dead drops” they teach at the CIA probably won’t help as much as cyber sleuthing and “social engineering.” We also don’t know how much the gig pays. (Our IRS cuts whistleblowers in for up to 30% of what they help collect.) Still, it’s a chance to play 007 for a day — who really cares what it pays?

So, Greeks who want to pay less have a simple plan — not telling the government how much they make! Here in the United States, that works, too — except it doesn’t. (It’s also against the law.) So if you feel like you’re bailing out Uncle Sam with more than your fair share, call us for a plan. Let’s see if we can save you enough for a Greek vacation that you don’t have to spy for!