Easily Satisfied with the Very Best 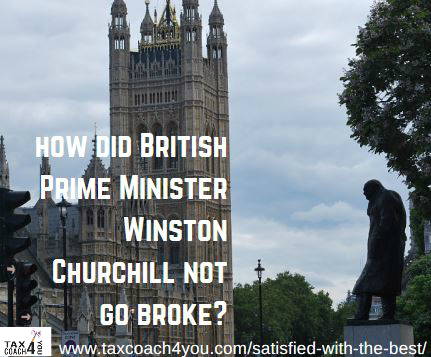 Few figures from recent history loom larger than British Prime Minister Winston Churchill, “the Last Lion.” He spent “the wilderness years” of the 1930s fighting the Conservative Party’s leadership, most notably Neville Chamberlain, to campaign for rearmament. As prime minister, he fought the Nazis to victory in World War II. Throughout his life, he fought the “black dog” of depression. But did you know how much he fought the Board of Inland Revenue — his country’s equivalent of our own IRS?

The Right Honorable Sir Winston Leonard Spencer-Churchill was born into privilege. His grandfather was the seventh Duke of Marlborough and lorded over Blenheim Palace, one of England’s stateliest homes. Maybe that’s why Churchill picked up the sort of indulgent habits that led so many British aristocrats to lose their stately homes. Now David Lough, a former banker, has written No More Champagne: Churchill and His Money, to chronicle Churchill’s precarious relationship with personal finance. And it includes a story to delight all of us who understand the value of smart tax planning.

Churchill loved to write. He loved to paint. He loved to drink champagne and smoke cigars. But most of all, it appears, he loved to spend. Take those infamous cigars, for example — by 1914, he was smoking a dozen a day, at a cost of about $1,600 per month in today’s dollars. Yet he went five years without paying his bill to J. Grunebaum & Sons, his tobacconist.

“These filthy money matters are the curse of my life and my only worry,” he wrote his mother when he was just 24 years old. Later, he told her: “It seems just as suicidal to me when you spend £200 on a ball dress as it does to me when I purchase a new polo pony for £100. And yet I feel that you ought to have the dress & I the polo pony. The pinch of the whole matter is that we are damned poor.”

Lough’s book recounts how Churchill even flirted with bankruptcy. Just one month after becoming PM, he ran out of money to pay his household bills, his taxes, and the interest on his loans. His assistant approached a prominent anti-Nazi banker for a £5,000 handout — equal to $250,000 in today’s dollars.

Fortunately, Churchill had financial reinforcements outside his government salary: his income from writing. And that’s where he conjured up a little tax-planning magic. In 1940, he cleverly persuaded his finance minister that since he was now “retired” from writing, any income he earned from that source should be treated as nontaxable capital gains rather than ordinary income. This would eventually mean no tax on the sale of film rights to his books, nor on advances for his memoirs. Of course, when he left office in 1945, he faced punishing 90% rates on any future works. (It’s no wonder he turned to painting!)

Now it looks like clever planning is a Churchill family tradition. Last year, his daughter died at age 91, and Her Majesty’s Revenue and Customs department agreed to accept 37 of his paintings in lieu of £9.4 million in inheritance taxes. The paintings will hang at the family’s former home outside Kent.

If you’re like most of our clients, when it comes to taxes, you want to fight them on the beaches, fight them on the landing grounds, and fight them in the fields and streams and hills and never surrender. The good news is you don’t need to strongarm the Secretary of the Treasury into letting you pay less. You just need a plan. So call us, before December 31, to assure your finest hour!

← Quantum Mechanics (or Something Equally Complicated) Uncle Sam, Knowing When to Hold'em →