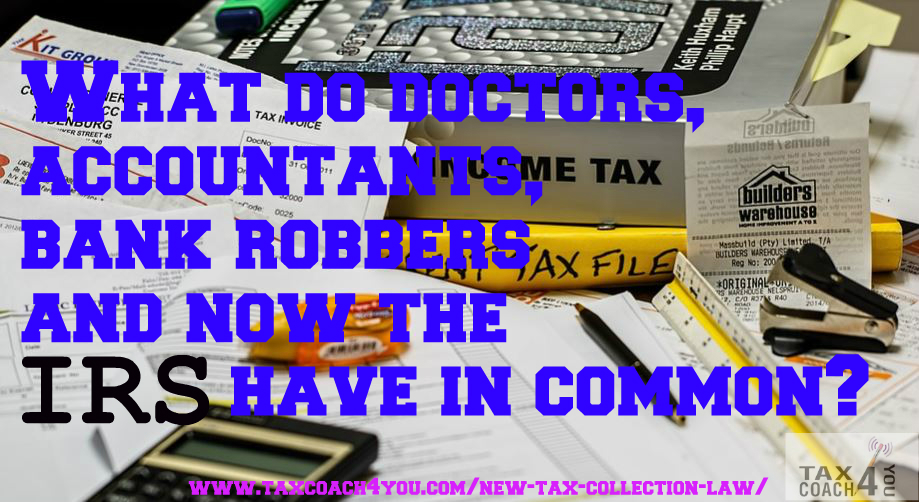 Turn the dial on the Way-Back Machine to the days of the Great Depression. Millions of Americans are jobless, struggling just to eke out a living. But one man named Willie Sutton has discovered unlimited opportunities in a truly recession-proof field: robbing banks. And why did he choose banks, an enterprising reporter asked? “Because that’s where the money is,” Sutton supposedly replied.

When Sutton published his autobiography 40 years later, he denied saying those words. But by that point, they were so famous it didn’t matter. Today, med students learn “Sutton’s Law” to focus their workups on the most likely diagnosis, rather than every conceivable possibility. (Sutton obviously never saw an episode of Grey’s Anatomy.) And accountants use the “Willie Sutton rule” when they focus their activity-based costing where the highest costs occur, because that’s where they’re likely to find the biggest savings.

Now it seems our friends at the IRS have stumbled upon Sutton’s Law, too. Last month, the Treasury Inspector General for Tax Administration released a 34-page report arguing the service spends too much time auditing people who make “merely” $200,000-400,000, and should spend more time on “Global High Wealth” taxpayers earning even more. We know you don’t want to read that report, so we’ll go ahead and summarize it for you.

Numbers like that suggest that the IRS audit should everyone, or at least everyone above a certain income. (Maybe just everyone who looks really sneaky?) So here’s the challenge. Congress has slashed the IRS’s budget by 18% in real dollars since 2010. That means picking audit targets more strategically. The Inspector General’s report argues the service should spend more time on so-called “enterprise cases,” where they examine individual taxpayers plus the corporations, partnerships, trusts, and other entities they control. Those efforts take more time, more effort, and more experienced staff — resources they can’t spend on lower-income cases. But that’s where the money is! So where should auditors draw the line? $200,000? $400,000? Or even higher? What do you think?

Of course, the IRS can’t stop auditing everyone else entirely. Fear of an audit is their cheapest and best tool to ensure compliance. Focusing those efforts entirely on “the 1%” would undermine that deterrent. And if everyone earning less than $200,000 knew they had a hall pass from the IRS, pretty soon there wouldn’t be enough tax dollars collected to pay auditors at all!

Here’s the lesson for the week. You already know that the key to paying less tax is planning. But did you know that some of the most powerful tax-cutting strategies can also lower your audit odds, too? Planning to pay less doesn’t mean waving a red flag in an auditor’s face. It might even mean pulling one back. So call us to see if we can help keep you off the IRS radar!