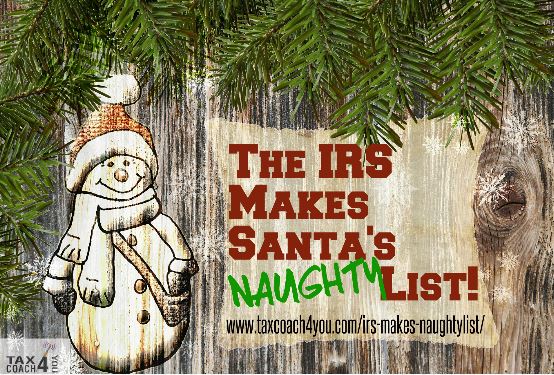 Back in 2002, Steve Epstein, the director of the Pentagon’s Standards of Conduct Office, faced a common dilemma among ethics officials: how to keep his training sessions fresh and relevant? His answer was to avoid discussing dry statutes like 18 U.S.C. § 205, and focus instead on telling stories. “We discovered that the first thing you have to do is you have to entertain folks enough so they will pay attention.”

Epstein found plenty of stories, and assembled them into the Encyclopedia of Ethical Failure, a compelling collection. He organized them into helpful categories like “Bribery,” “Credit Card Abuse,” and those always-entertaining “Time and Attendance Violations.”

Epstein’s list focuses mainly on military personnel. But we were curious to see if anyone at the IRS had wound up in his Hall of Shame. And sure enough, we found a few. Now, the vast majority of IRS employees are honest, hardworking public servants, doing a thankless job in an era of shrinking budgets and rising hostility. But Christmas is approaching, and somebody has to wind up on Santa’s naughty list!
•     An IRS Revenue Agent became friends with the owner of a construction company that owed back taxes. The agent wound up accepting generous gifts like free dinners, free rounds of golf, and a check for $14,900 that he used to buy a car. He ended up admitting that the gifts from his new bestie made it hard to collect the construction company’s outstanding debt, and spent three years thinking about it at a federal installation with no golf course.
•     Two rental-car company owners conspired with two IRS employees to ignore their tax debt in exchange for free rental cars and paid vacations to Florida. Alas, people in stories that begin with the word “conspired” rarely end well, and this one was no exception. Instead of finishing with “they all lived happily ever after,” this one features words like “jail,” “restitution,” and “supervised release.”
•     An IRS employee learned inside information about a stock transaction while he was working on a collection. After the assignment, he bought $2,000 worth of the stock. Apparently his conscience got the better of him, and he came clean to his supervisor. This led to charges for participating personally as a government employee in a matter in which he had a personal interest. The prosecution, in turn, led to his resignation, plus six months in a pretrial diversion program. Oh, and in a victory for karma, he lost money on the stock!
•     An IRS officer and two tax preparers dreamed up a scheme to cheat the government. The tax preparers convinced clients who owed money to the government that they could negotiate a better deal if they made an up-front payment. Then the IRS officer falsified records to show the clients were “uncollectible,” which meant the IRS stopped pursuing them. Meanwhile, the money the clients thought they were paying over to the IRS never actually found its way there. Naturally, all three of our criminal masterminds wound up serving time.

Here’s the good news this holiday season. It really is possible to pay less and make the nice list. You don’t even have to wait for Santa to leave anything under your tree. Just call us for a plan, before the clock strikes midnight on December 31!