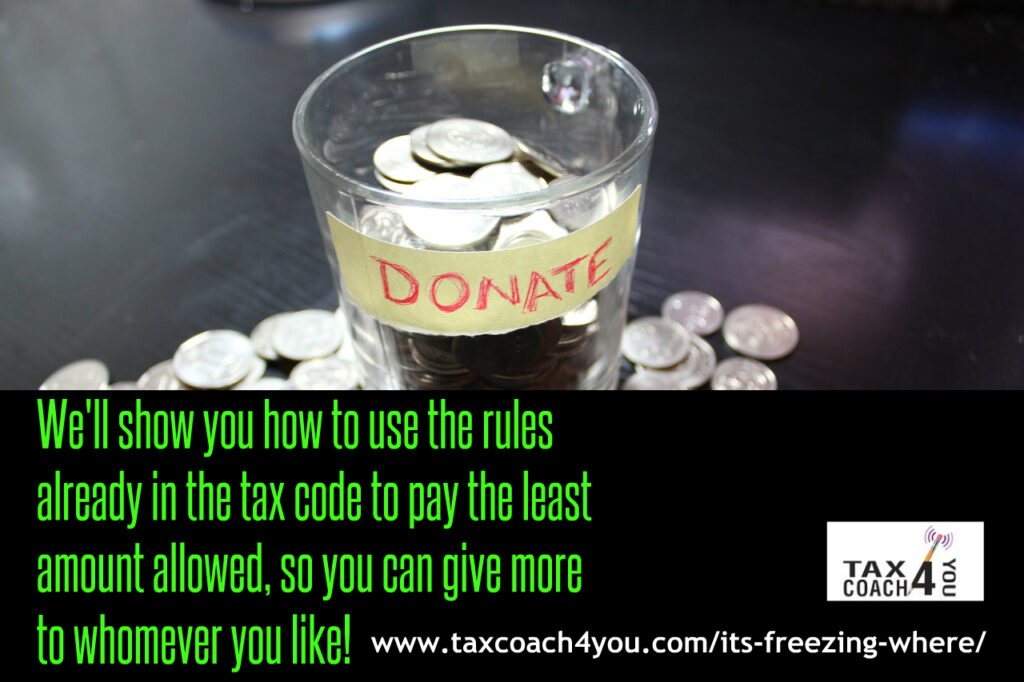 Taxpayers across much of the Midwest and east coast have enjoyed a relatively light winter this year, with mild temperatures and little snow. But Old Man Winter made up for it last week. Temperatures dropped well below zero and wind chills broke records across the country. Friday morning saw thermometers dip below freezing in the Florida Everglades, and parts of North Carolina were colder than in Barrow, Alaska!

Care to guess where else temperatures have been falling? If you said “in Hell,” you’re right. That’s because the House of Representatives, where gridlock appears to have found a permanent home, actually passed a bipartisan tax bill last week. The America Gives More Act would take three of those maddeningly “temporary” tax breaks that Congress barely manages to extend every year, and make them permanent. As the name implies, all three are intended to reward charitable giving:

It lets taxpayers age 70½ and older contribute up to $100,000 per year from their IRAs directly to charity in lieu of taxable required minimum distributions.

It lets taxpayers deduct gifts of “conservation easements” up to 50% of adjusted gross income (rather than the current 30%) and carry forward any unused balance for up to 15 years.

Finally, it extends “above basis” deductions for food donations from business inventories. Usually, when you give something out of your business inventory to charity, your deduction is limited to the cost you paid for the item. However, if you donate “wholesome” food inventories, you can deduct either: 1) the price you paid plus one-half of your expected profit, or 2) twice the price you paid. (We can only imagine how many hours some clever lawyer working for Frito-Lay will get to bill arguing that Cheetos’ new “Sweetos” cinnamon-sugar puffs qualify as “wholesome.”)

As we all remember from Schoolhouse Rock, the bill now heads across the Hill to the Senate. Unfortunately, extending the three tax breaks would cost the Treasury $12.2 billion over the next 10 years, and the bill does nothing to replace that lost revenue. So President Obama has already pledged to veto it. Well, can’t blame the House for trying, right?

“Comprehensive tax reform” is one of those lip-service goals that everyone in Washington says they support. But the political obstacles to making tax reform happen are so daunting that even the CSI team would be hard-pressed to discover who killed it. (Democrats insist it was Speaker Boehner in the Conservatory with the lead pipe, while Republicans point to Minority Leader Reid in the Library with the candlestick.) But last week’s vote shows that individual reforms just might still stand a chance.

What’s next? Well, a bipartisan group of Kentucky and Tennessee legislators have introduced a bill letting whiskey distillers deduct their production expenses currently, rather than capitalizing them for up to 20 years while the product ages. Members of Congress — whom Mark Twain described as the only “distinctly native American criminal class” — have a reputation for loving their whiskey. So the Aged Distilled Spirits Competitiveness Act of 2015 should have a bright future!

In the meantime, you don’t have to wait for Washington to act to pay less tax. You just have to call us for a plan. We’ll show you how to use the rules already in the tax code to pay the least amount allowed, so you can give more to whomever you like!

← Keeping An Eye On Top Tax Payers You Taxin' Me? →