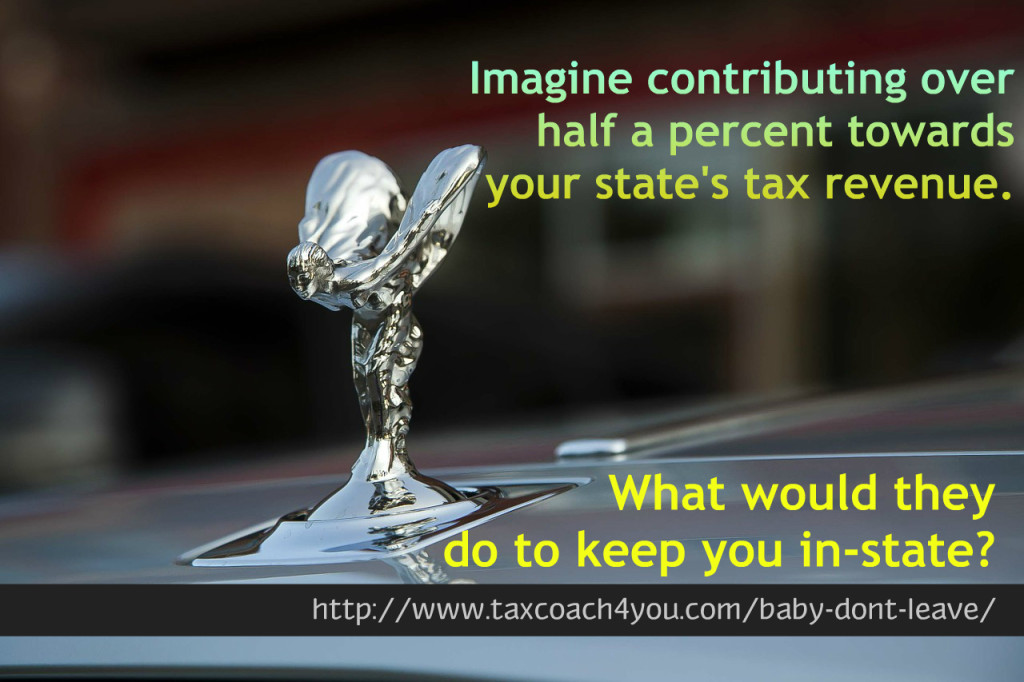 every year, and they work just as hard to protect their revenue base as their friends at the IRS. Sometimes that means putting lots of eggs in one basket — then watching that basket very, very carefully. But one state acknowledges taking that particular strategy to a new level. In a move that falls somewhere between “I can’t believe they haven’t done this already,” and “Wow, that sure sounds like stalking,” the Connecticut Department of Revenue Services has revealed they’re “keeping an eye” on their top 100 individual taxpayers to make sure they don’t leave the state — and take their taxable income

of any state in the country. It takes $678,000 per year to join the much-discussed “top 1%” club, compared to $389,000 for the United States as a whole. But we’re not talking about dime-a-dozen Wall Streeters here. We’re not talking “the millionaire next door.” No, we’re talking true fat cats. James Bond-villain money

. Guys who are literally buried in so much cash

it would take an entire village full of torch-wielding peasants to storm them out of their castles.

Let’s take a closer look at one of the state’s new pals. Steve Cohen is a hedge fund

manager who lives in Greenwich in a 35,000 square foot home with an ice-skating rink the size of the one at Rockefeller Center and a two-hole golf course. He charges his clients four percent of the assets he manages, plus up to 50% of their gains

rate is 6.7%. A little fourth-grade math tells you the state siphoned $154.1 million out of Cohen’s bulging pockets.

Now let’s put that tax bill in a broader perspective. Connecticut’s budget for Fiscal 2013 was $28.1 billion. That means Cohen picked up more than half a percent of the state government’s entire tab for the year, all by himself. (Ironically, last year Cohen closed his fund

to outside investors in the wake of an insider-trading scandal, which will virtually eliminate his earned income

. We doubt that federal prosecutors were thinking about his state tax bill when they filed charges against his fund

may have vaulted him to the top of the heap. But he’s hardly the only super-earner to make it rain in Connecticut. One accounting firm with offices in Greenwich reports preparing tax returns

for three unidentified Nutmeggers with billion-dollar incomes. Ray Dalio, head of Bridgewater Associates, raked in $900 million in 2013. (Sure, that sounds like a lot, but it’s actually down from $3 billion in 2011). Paul Tudor Jones, who lives in a Monticello-inspired mansion with a 25-car garage, scored $700 million.

“There are probably a handful of people, five to seven people, who if they just picked up and went, you would see that in the revenue stream,” says Kevin Sullivan, the Department’s commissioner. Two years ago, Sullivan adds, his office heard that one particular hedge funder might be leaving, and set up a meeting to urge him to stay. The manager moved (d’oh!), but agreed to keep his company back in “the little state that could.”

like a jealous lover? Or would you be creeped out? Either way, you’d probably want to pay less so you could disappear from that particular radar. That’s where we come in. We give you a plan to keep as much as you legally can, no matter where you earn

your income. So call us — unless you’re looking for a new best friend!