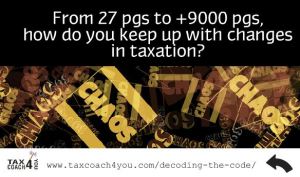 The Imitation Game is the critically acclaimed story of Alan Turing, a British mathematician who is widely credited as being the father of computer science and artificial intelligence. Benedict Cumberbatch plays Turing, whose work in cracking Nazi Germany’s “ENIGMA” code helped lift the Allies to victory in World War II.

Seventy years later, retiring Senator Tom Coburn (R-OK) has picked up the code-breaking bug. But Coburn has decided to take on something even more twisted and fiendish than Nazi ciphers. That’s right — he’s just issued a 312-page “Tax Decoder” taking on our tax system. (Read it at your peril — if decoding takes 312 pages, just imagine what encrypting looks like!)

Coburn’s goal is to give us “an educational reference guide designed to equip taxpayers and lawmakers with the details needed to thoughtfully reconsider many aspects of the existing tax code.” We’re not sure why Coburn thought he needed 312 pages to make his case — anyone who’s ever seen their first paycheck and wondered “what’s FICA?” knows the system is a mess. Still, here are some highlights:

Coburn’s solution probably won’t surprise you. Ideally, throw it all out and start over. At the very least, make it simpler, flatter, and fairer. “The tax code should be simple enough that everyone — including members of Congress — is capable of filling out their own tax return.” (We’ll let you decide if that means an easier tax system or smarter members of Congress!)

Still, there is some good news that we can help you put to work — and you’ll find it on the very first page. “Due to the code’s complexity, your taxes are not a simple calculation of earnings and obligations. Instead, taxes are determined by how well you can take advantage of the hundreds of tax credits, deductions, exclusions, and carve-outs tucked into the code.” In other words, all that complexity creates opportunity — and the more complicated your taxes are, the more likely we can help. So, if you’re looking for a New Year’s resolution to kick off 2015, call us and resolve not to waste any more money on taxes you don’t have to pay!

← Interview With Diane Gardner by the M&A Journey A Royal Mess! →