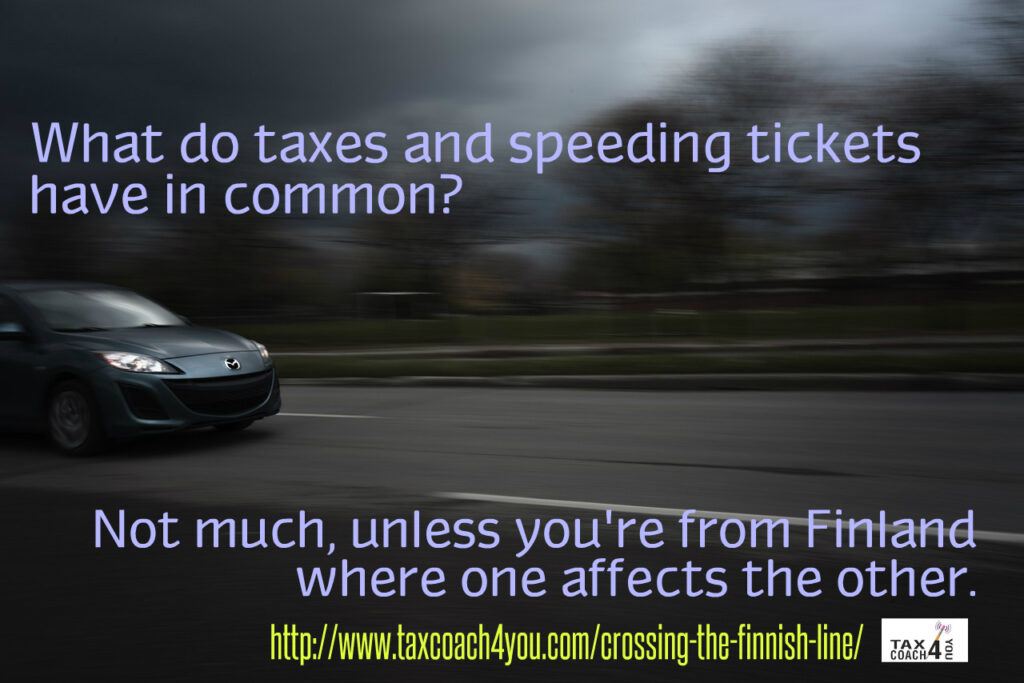 You know that sinking feeling. You’re driving down the road, minding your own business, when you see a cop’s “cherries and berries” flashing in your mirror. Then you look down at your speedometer, and realize he’s gunning for you. Sure, it’s a bummer. But it’s not that big a deal. The cop checks your license, registration, and proof of insurance. He runs your name through the computer to make sure there aren’t any outstanding warrants. Then he sends you on your way, a few bucks lighter and a few miles per hour slower.

Well, they do things a little differently in Finland. What else would you expect from a country where reindeer sausage is a delicacy and wife-carrying is a thing? (No kidding — whoever crosses the Finnish line first wins his wife’s weight in beer!) In Finland, when the police pull you over, they check your license, your registration, and your tax return. They want that ticket to hurt, even if you’re loaded — so the more you make, the more you pay.

Lots of Americans would be surprised to learn that Finland even has rich people. It’s socialist Scandinavia, right? But neighboring Sweden is actually home to more billionaires per capita than we are, and Scandinavian entrepreneurs are responsible for cash cows like Skype, Spotify, and even Angry Birds. So those fines can get pretty heavy.

Reima Kuisla is a Finnish investor, hotelier, and racehorse owner. One day he was driving to the airport, and the polissi clocked him doing 64 mph in a 50-mph zone. They checked his taxes, saw that he had made about $7.15 million the previous year, and fined him the equivalent of $60,000! (The BBC, which originally broke the story, doesn’t tell us what kind car Kuisla was driving. But we can probably assume it comes fully equipped with the latest heads-up navigation display, active suspension, and special charcoal scrubbers to filter out the smell of poverty.)

Kuisla’s supercharged fine works out to the same as $415 for someone making $50,000 per year. Painful, but not fatal. Still, that’s not stopping him from being a crybaby. “Ten years ago I wouldn’t have believed that I would seriously consider moving abroad,” he whined on his Facebook page. “Finland is impossible to live in for certain kinds of people who have high income and wealth.” Not surprisingly, he’s not getting a whole lot of sympathy. He isn’t even the first Finn to wind up on the exhaust end of a big speeding fine. In 2002, a Nokia executive named Annsi Vanjoki was fined $103,600 for riding his Harley-Davidson a lousy 47 mph through a Helsinki suburb. He appealed the fine, arguing that his income had dropped, and successfully reduced it to “just” $5,245. Such a bargain!

Here in the United States, of course, we don’t have to worry about traffic cops snooping through our taxes. But if we did, it would just be another good reason to have a plan to pay less. So call us when you’re ready for your plan. Set up a time to come see us. And watch your speed on your way over — we wouldn’t want you wasting your tax savings on a ticket!