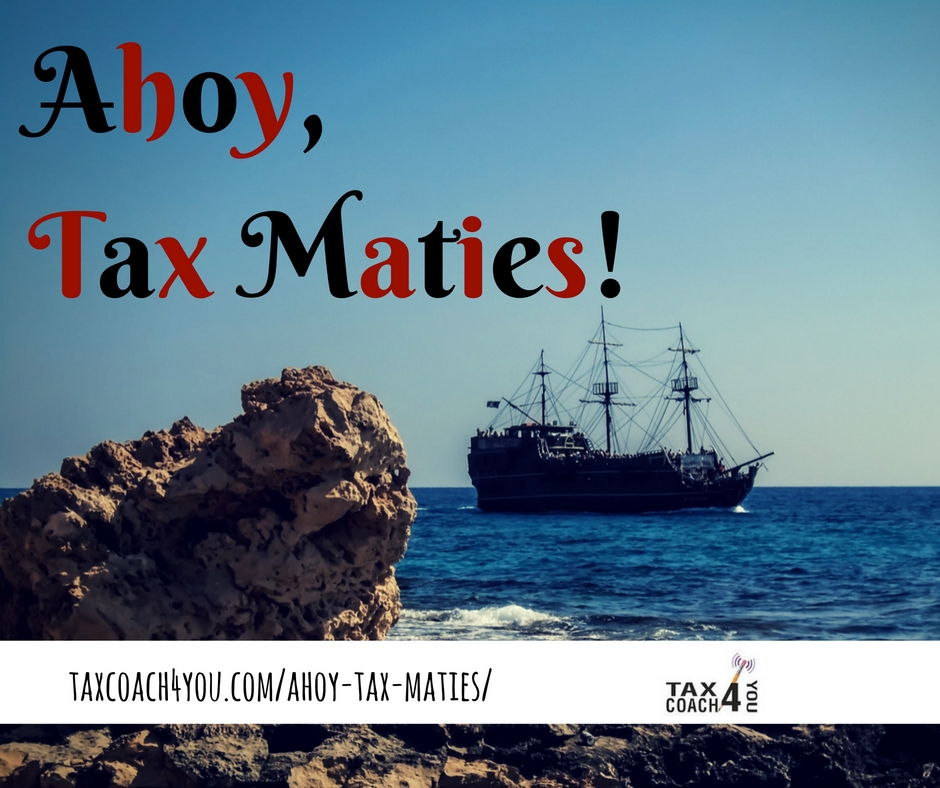 Labor Day has faded into memory, and before you know it, the holidays will be here. Halloween, Thanksgiving, and the year-end Christmas/Hanukkah/Kwanzaa cavalcade of commercialism are the obvious “Big Three.” But in all the holiday season hype, it’s easy to overlook a newer celebration that grows more popular every year. We’re talking, of course, about International Talk Like a Pirate Day — observed this year on Monday, September 19.Tax

Have you heard about the new pirate movie? It’s rated ARRRRRGH!

When you think of pirates, you probably picture swashbuckling “Golden Age” captains like Edward “Blackbeard” Teach or “Calico Jack” Rackham. Maybe your tastes lean towards the fictional Jack Sparrow or Long John Silver. Either way, you’d probably be surprised to learn that the real pirates of history could be a sophisticated lot, organizing themselves into democratic societies, with checks and balances to enforce discipline — and even “taxing” themselves to pay expenses.Tax

Some captains went so far as establishing written codes to maintain law and order. (No one walks the plank without due process!) Bartholomew “Black Bart” Roberts, who captured over 470 ships before dying in a broadside of British grapeshot, ruled according to 11 articles. Number ten on his list provided that, “The captain and the quartermaster shall each receive two shares of a prize, the master gunner and boatswain, one and one half shares, all other officers one and one quarter, and private gentlemen of fortune one share each.” Even Bernie Sanders could approve of such equal distribution!Tax

What do you call a pirate that skips class? Captain Hooky!

Today’s pirates face a whole new set of challenges, including how to handle their ill-gotten gains. If you decide to deep-six your desk job for an eyepatch and life on the sea, you’ll find your income subject to the same tax as any other business, legal or not. “Booty” is taxed at fair-market value under the rules of Code Section 83(b).

What was the pirate’s golf score? Parrrrrrrrrr!

Fortunately, you’ll get the same deductions as any other business. Ships and equipment you buy to conduct raids are considered capital equipment, depreciable over the applicable period. Guns, grappling hooks, and smaller items qualify for first-year expensing. And if the Indian navy sinks your ship, you can claim a capital loss. It’s good to know that if an IRS auditor says “I’m the captain now,” you won’t be completely hornswoggled.

How much does it cost a pirate to get a piercing? A buck an ear!

Yo ho ho mateys, pay attention here. The end of the year isn’t just holiday season, it’s planning season. And planning is the key to keeping your treasure and making it grow. So call us to help keep the scallywags at the IRS from getting too many of your pieces of eight!

← Red Tax Inheritance Rising Do They or Don't They? →