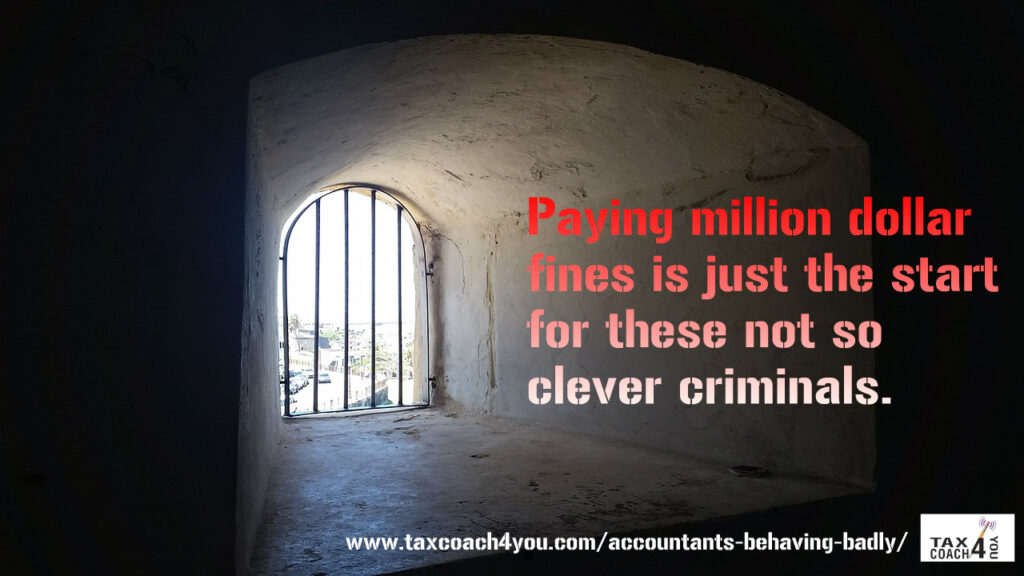 Every year, “true crime” fans look forward to the IRS Criminal Investigation Unit’s annual report detailing their efforts to combat the cheats who don’t pay their share. This year’s edition is no exception, with dozens of entertaining stories about clever scammers who just . . . weren’t . . . clever . . . enough.

You would think accountants would be the last group of people to try and game the system. That guy with the green bow tie in the H&R Block commercials? He wouldn’t even bend the rules, let alone break them. But the Criminal Investigation report reveals that accountants are actually some of the worst scofflaws. In fact, there’s an entire criminal program targeting crooked tax preparers, and it launched 1,063 investigations last year! Here are four outrageous stories you might enjoy:
•Haydee Guerra Neff operated a tax-prep business out of her home in Casa Grande, Arizona, a sleepy desert town about halfway between Phoenix and Tucson. She prepared perfectly legitimate returns for her clients to sign. But then she slipped in fake education credits, mortgage interest deductions, and residential energy credits before she filed them. Then she used Form 8888 to send the legitimate part of the refunds to her clients and the keep the rest to herself. (She must have missed class the day her criminal mastermind program covered “paper trails.”) Now she owes the IRS $435,280 in restitution. But it’s gonna be tough finding new clients among the “cellies” at her California prison camp.
•   Steven Boitano was a partner in a CPA firm in San Jose, where he prepared tax returns for his clients and even his own firm. He did well for himself, earning $275,000 per year. But for a guy who made so much money preparing taxes, he sure didn’t like paying them. In fact, he never even filed. When he finally showed up at the IRS office, returns in hand, he claimed he had made $121,000 in estimated payments. (Then his pants literally burst into flames, right there in the office!) His lies cost him $181,910 in restitution and 41 months in jail.
•   John Hoang is a CPA and attorney convicted felon who operated a tax-prep business in Woodbridge, Virginia. His “eureka” idea was to make up fake losses from fake technology licensing businesses for his clients, which defrauded the government out of $1.5 million. He earned $6 million for himself while running his scam. (Apparently, the wages of sin aren’t bad.) Of course, he didn’t bother sharing any of it with the IRS. Now he’s enjoying government hospitality in a federal prison camp, where he’ll be lucky to license dial-up internet technology for 20 minutes every other Thursday.
•   Paul Daugerdas was another attorney/CPA with big ambitions. Meek high-school chemistry teachers like Breaking Bad’s Walter White may dream about putting on a rubber apron and goggles and opening a meth lab. But true ballers like Daugerdas put on a worsted wool suit and open tax shelter labs. Daugerdas cooked up schemes to create false tax losses with names like SOS (for “short options strategy”), HOMER (“hedge option monetization of economic remainder”) and COBRA (“currency options bring alternative rewards”). When clients screwed up the details implementing his ridiculously complex schemes, he helpfully backdated documents and authored false opinion letters describing when transactions had supposedly occurred. He shaved $7 billion off his clients’ tax bills. He made $95 million for himself along the way — but naturally used his own scheme to pay less than $8,000 on that income. It took awhile for the IRS to shut Daugerdas down — but when they di d, he wound up with 15 years in prison and $536 million in fines and restitution.

Some guys have all the fun. Steal from the government and party like a boss, at least until you get caught. Then it’s time for jailhouse nicknames and prison tattoos. Sign us up. Seriously, what are these people thinking?

You know better than that. You know the best way to pay less is to plan to take advantage of all the legal deductions, credits, and strategies available. So if you think you paid too much on April 15, call us. We’ll give you the plan you need to share less with Uncle Sam — and avoid having to take advantage of his hospitality, too!