What Would You Do for a Klondike Bar? 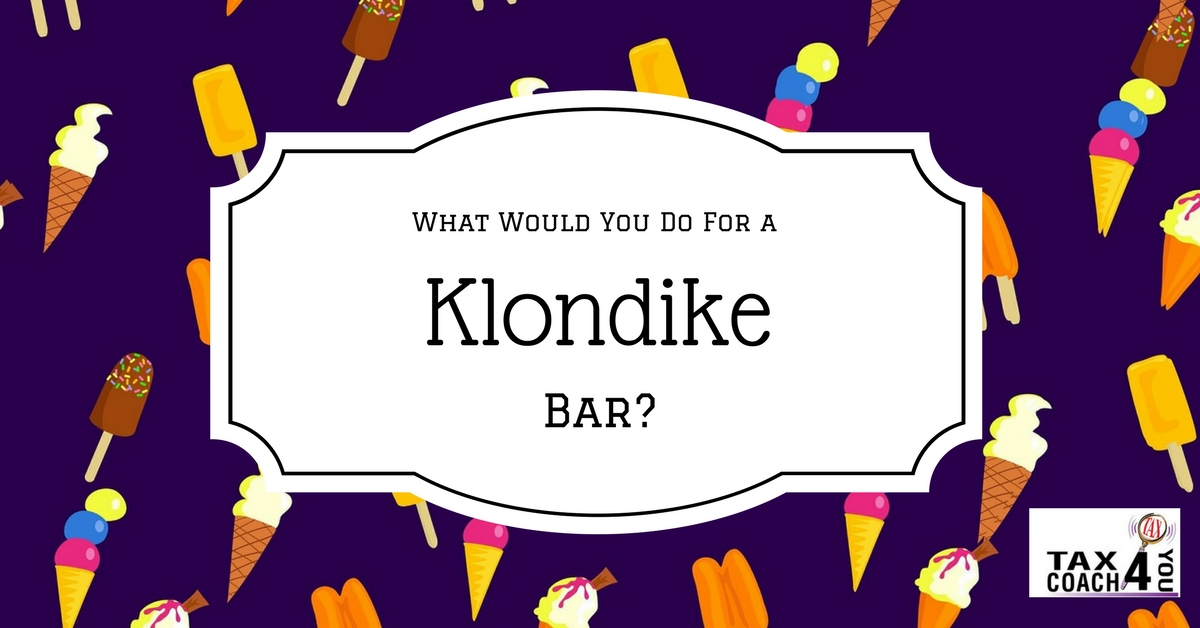 In 1982, Unilever came up with a catchy jingle to sell Klondike bars, a sort of Eskimo pie without a stick: “What would you do for a Klondike Bar?” The challenges weren’t especially grueling. Would you make monkey sounds? Act like a chicken? In one spot, a boneheaded dudebro actually listened to his wife talk (about painting the foyer yellow) for five seconds to get his hands on the creamy treat. avoid taxes

Now wallethub.com, a personal finance website, has updated the question, if not the actual jingle. But WalletHub doesn’t care what you’d do for dessert. They surveyed 500 Americans to discover what you would do to avoid taxes. The answers might surprise you!
What would you do to avoid paying taxes for the rest of your life? 20% would get an “IRS” tattoo. 16% would move abroad. 10% would give up talking for six months. 4% would sell a kidney. And 2% would spend a year in jail! Who do we like more than the IRS? Former President Barack Obama took home the gold with 56%, with Pope Francis bring home the silver at 50%. Justin Bieber got 15%, Kim Kardashian got 13%, and even OJ Simpson placed at 7%. (You’ve really got to detest the IRS to like OJ Simpson more!) avoid taxes

What would you rather do than prepare your taxes? 73% said laundry, 56% said cut the grass, and 50% said teach their children to budget. Ok, those sound easy enough — except maybe the “budget” part. But 40% said they’d rather change a baby’s diaper, 30% would rather talk to their kids about sex, 12% would rather spend a night in the pokey, and 9% would rather break their arm! avoid taxes
Would you hide money offshore? 81% said no, even if they knew they wouldn’t get caught. Of course, that leaves a full 19% we apparently need to look out for!

What scares you most about taxes? 32% said identity theft, which seems well-founded these days. 30% said making a math mistake. 20% feared not having enough money to pay. And 18% worried about getting audited. (The actual audit rate is sitting at a historic low of 1%.)
What’s your favorite government institution? The Department of Veterans Affairs came in at number one, with the Department of Education, FBI, CIA, Federal Reserve, and White House all beating the IRS. Only Congress came in even lower.

GoBankingRates.com also asked a group of Americans what they would do to avoid taxes. 32% would stand up and perform five karaoke songs in front of their co-workers. 18% would go without wifi for a year, which wouldn’t be much of a sacrifice to the 90% of humanity that lived before wifi was even a thing. 13% would gain 20 pounds, 11% would let their web browsing history be made public, and 6% were willing to smell like a skunk for six months!

Why go to the depths of such unpleasantness? We can’t promise you a tax-free future, and tax prep won’t ever be fun. But we can tell you it doesn’t have to be as hard. You just need a plan to pay the minimum amount allowed. And that’s where we come in. We promise it’s easier to sit down with us than it is to waste money on taxes you don’t have to pay!

← Your Accountant Is Not A Tax Advisor Tax Theory →