Up in Smoke Tax 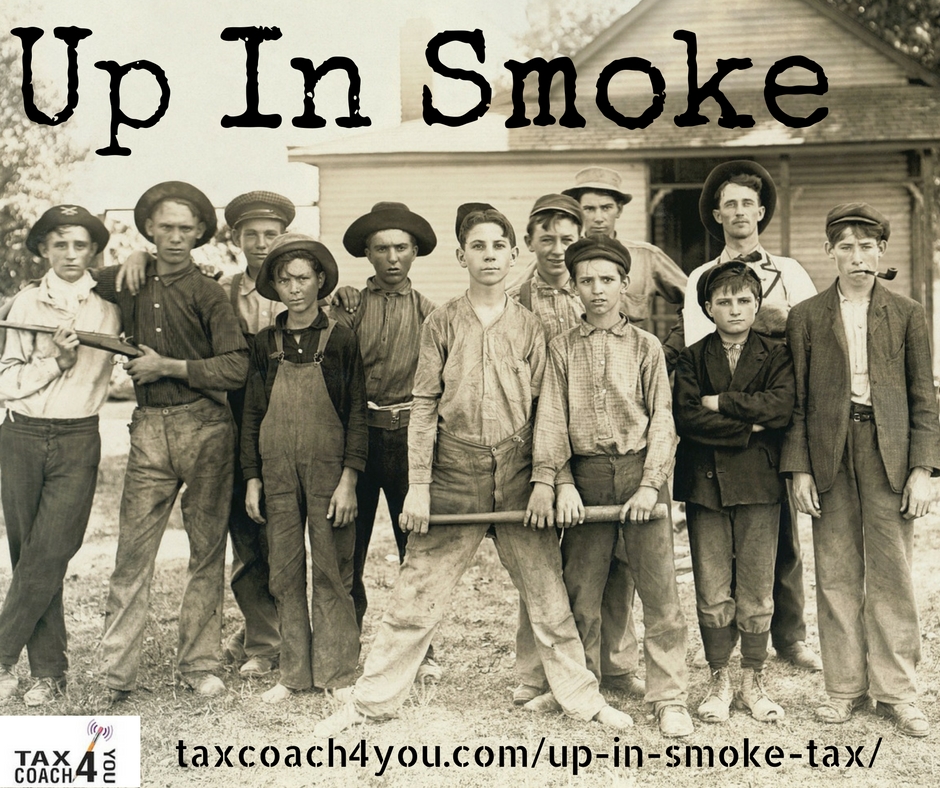 Organized crime also has a long history of tangling with tax authorities. Try as they might, Elliot Ness and his fellow “Untouchables” couldn’t jail Al Capone for bootlegging, bribery, or the St. Valentine’s Day Massacre. It took IRS agent Frank Wilson three years of dogged investigation to finally put Capone behind bars for the pedestrian offense of failing to pay his taxes. Even Tony Soprano knew enough to report a salary from his waste management business to keep the IRS off his back. Tax

Earlier this month, the Mob was back in the news as the FBI unsealed an indictment and arrested 46 members of various New York and Philadelphia-area crime families. The suspects sported the usual collection of colorful nicknames like “Tony the Wig,” “Anthony the Kid,” “Tony the Cripple,” and “Mustache Pat.” But their actual crimes seemed a far cry from the wars that defined the Mob’s glory days. While the indictment included old-school staples like gunrunning, loansharking, and bookmaking, it also featured “participation trophy” offenses like health care fraud, credit card fraud, and selling untaxed cigarettes. Tax

Cigarette smuggling might sound like a penny-ante crime, especially compared to the whacking, kneecapping, and “protection” rackets of mob legend. (“Nice business ya got here. Be a real shame if anything happened to it.”) But the Bureau of Alcohol, Tobacco, Firearms, and Explosives estimates that black-market smokes cost governments $5 billion per year. In New York, where the tax is $4.35 per pack, an estimated 57% of all sales involve smuggled cigarettes. And every time the tax goes up, so do the incentives to smuggle.Tax

How does the scheme actually work? Simple arbitrage. Buy your cigarettes someplace cheap like Virginia, where the tax is just 30 cents per pack. Truck them up I-95 to New York City. Sell them at a discount to bodegas and other independent retailers. Then conveniently “forget” to tell the tax man about it. Smugglers generally make between $4 and $6 per pack. That means a single truckload, which contains 48,000 cartons, can light up nearly $3 million in profit. Tax

Numbers like that make “buttlegging” so attractive that terrorists have fired up their own efforts. The 1993 World Trade Center bombing, in fact, was financed by cigarette smuggling. In 2002, a federal jury convicted a Lebanon native of smuggling cigarettes from North Carolina to Michigan to funnel profits for Hezbollah. And investigators believe that European cigarette smugglers help pay for ISIS’s reign of terror, too, both in the Middle East and throughout Europe.Tax

Here’s the lesson from today’s sad story of Mob decline. Every financial move you make involves at least some tax consideration. Now, snuffing out those taxes shouldn’t be your sole priority. But once you’ve made the right financial choice, your next step should be to find the most tax-efficient way to do it. That’s where we come in. So call us for the plan you need, and watch those unwanted taxes go up in smoke!Tax

← Faith Positive Radio Go for the Gold, The IRS Will Love It! →