Go for the Gold, The IRS Will Love It! 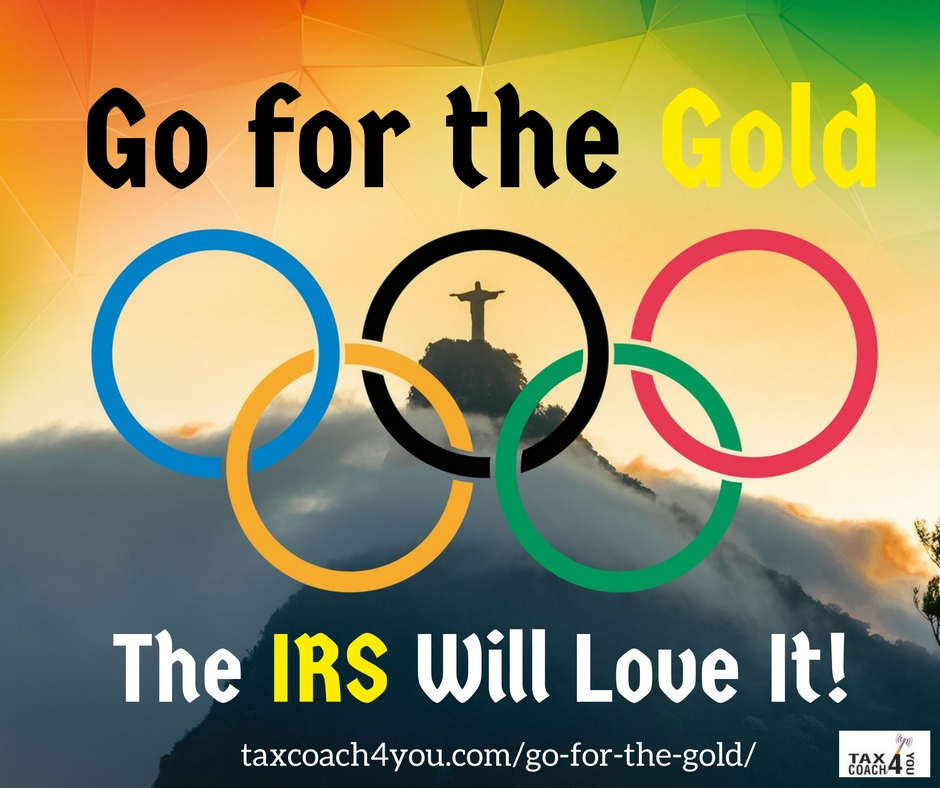 For awhile there, it looked like the just-concluded Rio Olympics would be a carnival of chaos. Golfers boycotting to avoid the Zika virus? Check. Swimmers making their way through raw sewage? Check. And those were just the disasters we anticipated before the opening ceremonies! Who could have predicted divers splashing into a pool of green water, or Ryan Lochte “over-exaggerating” making up a whopper about a drunken robbery? IRS

In the end, it all worked out, and we got to witness the usual quadrennial spectacle of sport, livened with a dose of Latin color. Swimmer Katie Ledecky earned five gold medals and, in one race, beat a woman on a jet ski. Gymnast Simone Biles is headed for the cover of Sports Illustrated and has gone viral with her quote, “I’m not the next Usain Bolt or Michael Phelps. I’m the first Simone Biles.” And none of Rio’s projected shortfalls disrupted the spirit of competition.IRS

Olympic games are full of upsets, disappointments, and uncertainty. But there’s one team that’s always guaranteed to win, and that’s the team at the IRS. They’re not taxing winners on the value of their medals, at least not yet. But the U.S. Olympic Committee awards cash prizes to U.S. medalists: $25,000 for bringing home the gold, $15,000 for the silver, and $10,000 for the bronze. Uncle Sam’s teams finished #1 in the medal race, combining for 46 golds, 37 silvers, and 38 bronzes. That means over $2 million in new income to tax!IRS

How do those cash awards compare with our competitors across the globe? Well, we’re nowhere near #1 in that race, for sure. If you live in Azerbaijan, bringing home the gold puts the Azerbaijani equivalent of 510,000 pretax dollars in your pocket. (We’re not sure where you can actually spend $510,000 in Azerbaijan, but men’s taekwando champ Radik Isaev probably can’t wait for the challenge.) If you live in Russia, and you aren’t disqualified for doping, bringing home the gold means an extra $135,000. Thailand’s Sopita Tanasan, who dominated the women’s 48kg weightlifting competition, will enjoy a $314,000 annuity to be paid out over the next 20 years.IRS

Of course, the keepsie money isn’t in the prizes, it’s in the endorsements. Swimmer Michael Phelps cemented his Olympic legend by breaking a 2,168-year-old record for most individual medals. (Leoniodis of Rhodes, the previous record holder, had to win a footrace while carrying a 50 pound shield and wearing a complete suit of armor.) Phelps has won “just” $1.9 million from his actual swimming. But he’s parlayed his fame into $94 million of taxable endorsements and a $55 million net worth. Maybe there’s really something to that “cupping” nonsense?

Winning at the Olympics can open doors we can’t even imagine yet. Consider this theory. In 1976, a young Bruce Jenner packed up his hopes and dreams and headed to Montreal. What if he gave it his all in the decathlon and finished . . . fourth? No medal, no Wheaties box, no Playgirl cover. Would we be keeping up with those krazy Kardashians today? (And for that matter, which of today’s stars will be headlining a reality-TV trainwreck while we’re watching the 2056 games?)IRS

Here’s the final result. Planning for one-time windfalls (like Olympic gold) can be just as important as planning for periodic income (like endorsements). The IRS wants a piece of it all. So call us before you earn your medals and we’ll help you make the most of your gold!

← Up in Smoke Tax Back to School Tax Time →