Tax Thoughts for the New Year 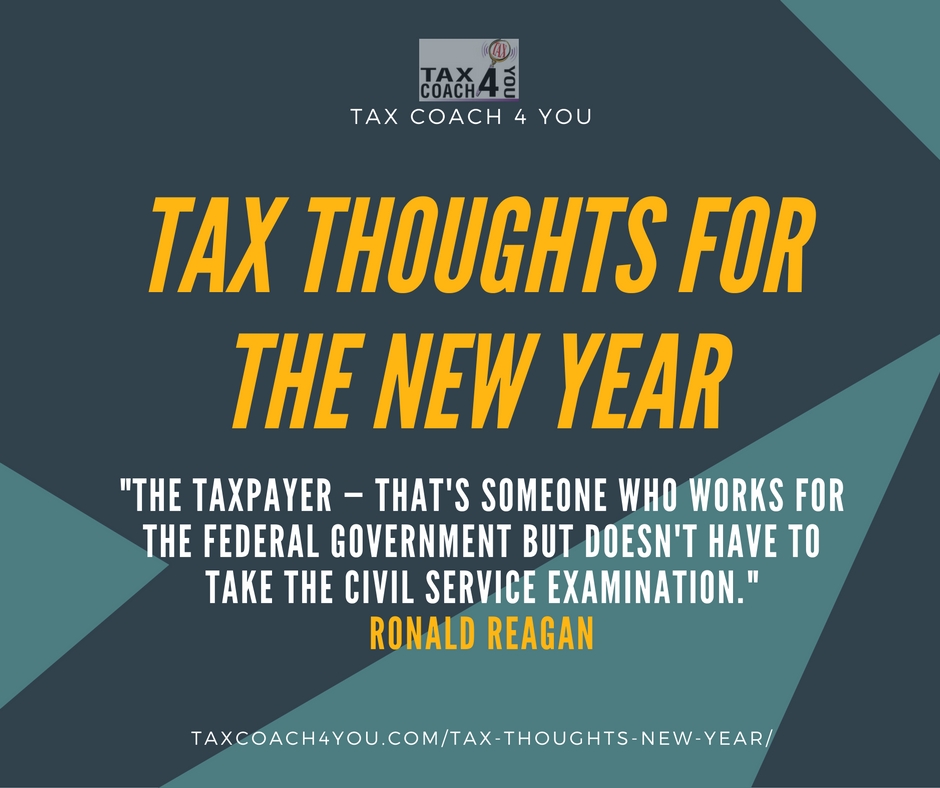 2017 is likely to be a big year for taxes. House Speaker Paul Ryan and President-elect Donald Trump haven’t been shy about their New Year’s resolutions to rewrite the tax code, and we could be in for quite a ride. So here are some thoughts to start exercising your 2017 tax-planning muscles

“If you get up early, work late, and pay your taxes, you will get ahead — if you strike oil.” J. Paul Getty

“If you are truly serious about preparing your child for the future, don’t teach him to subtract — teach him to deduct.” Fran Lebowitz

“The question is: What can we, as citizens, do to reform our tax system? As you know, under our three-branch system of government, the tax laws are created by: Satan. But he works through the Congress, so that’s where we must focus our efforts.” Dave Barry

“The avoidance of taxes is the only intellectual pursuit that carries any reward.” John Maynard Keynes

“The taxpayer — that’s someone who works for the federal government but doesn’t have to take the civil service examination.                  Ronald Reagan

“Income tax returns are the most imaginative fiction being written today.” Herman Wouk

“Dear Tax Commissioner: Three years ago I cheated on my taxes. Since then I have been unable to sleep at night. Enclosed is $5,000. If I still can’t sleep, I’ll send you the rest.” Anonymous

“Just because you have a briefcase full of cash doesn’t mean you’re out to cheat the government.” Pete Rose

“The difference between death and taxes is death doesn’t get worse every time Congress meets.” Will Rogers

“Worried about an IRS audit? Avoid what’s called a red flag. That’s something the IRS always looks for. For example, let’s say you have some money left in your bank account after paying taxes. That’s a red flag.” Jay Leno

We wish we could tell you exactly what’s going to happen with taxes, in 2017 and beyond. But whatever the future holds, we can promise we’ll be here to help you make the best of it, in 2017 and beyond. And remember, we’re here for your family, friends, and colleagues too!