Creepy Little Elf Has Nothing on the IRS 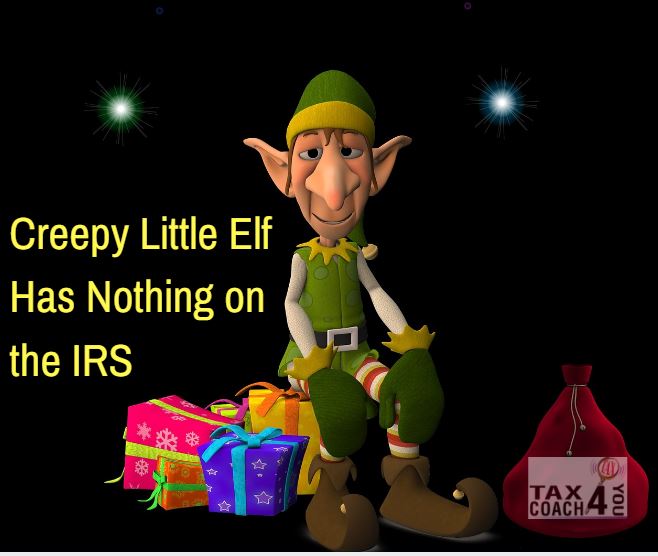 If you have kids and you celebrate Christmas, you’re probably familiar with the Elf on the Shelf — a storybook and accompanying doll that help encourage your little darlings to behave themselves before the holidays. The book tells wide-eyed children how Santa marshals an army of scout elves to sneak into their houses before Christmas, then fly back to the North Pole every night to rat out the stinkers. Every day the elves return find a new place to hide, which turns this whole monstrous Fourth Amendment violation into an adorable ongoing game of hide and seek.IRS

Parents love how the elf enforces good behavior. (Mommy says it’s that or an extra glass of wine!) But not everyone is a fan. The Atlantic magazine mocks it as a “marketing juggernaut dressed up as a tradition” that bullies kids into thinking good behavior equals presents. The Washington Post condemns it as “just another nannycam in a nanny state obsessed with penal codes.” And a Canadian professor argues that the elf brainwashes kids into accepting the surveillance state: “if you grow up thinking it’s cool for the elves to watch me and report back to Santa, well, then it’s cool for the NSA to watch me and report back to the government.”

Our friends at the IRS have their own version of the Elf on the Shelf. In fact, they have several — and they’re all more effective than the pointy-hatted little informant spying on your kids. Here’s how the IRS knows if you’ve been naughty when it comes to reporting your presents throughout the year:

The IRS systems may not be quite as effective as what the CIA or Department of Homeland Security can put to work. But they put that stool pigeon Elf to shame, at least until they can force Santa into filing a 1099-GIFT for every present he leaves.

Here’s the bottom line, for the elf and for you. Planning is the key to paying less tax, and you can do it without worrying about who’s watching. So call us to pay less in 2017, and have a happy New Year!