Smoke ‘Em If You Got ‘Em 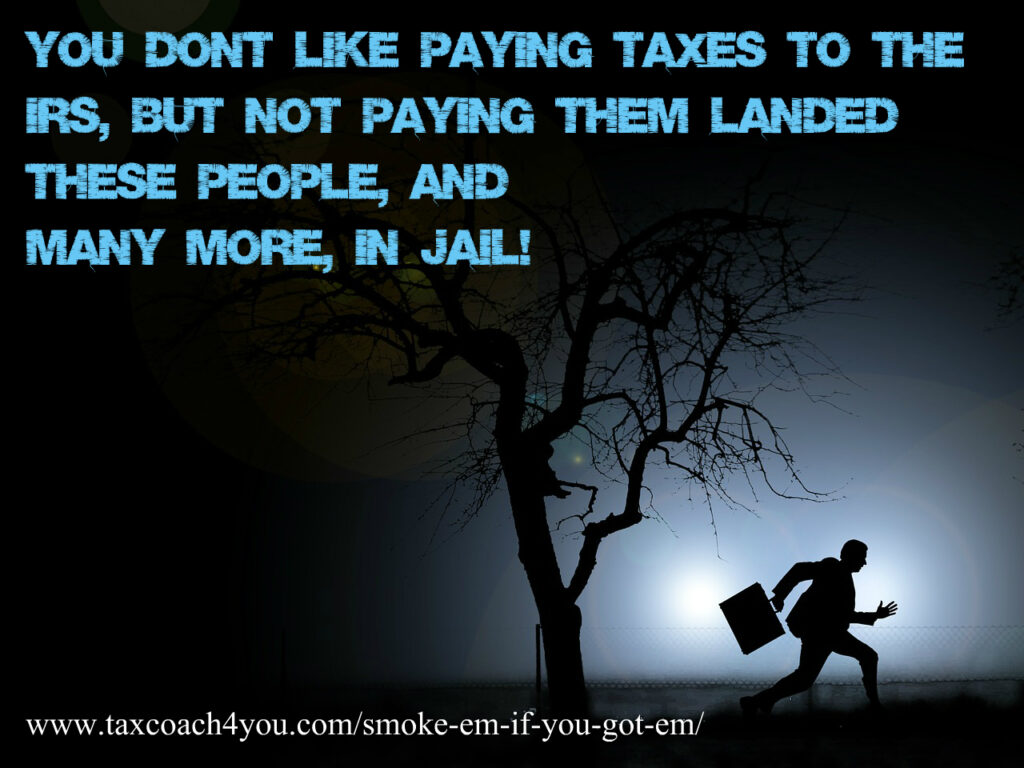 Every year, the IRS Criminal Investigations unit (IRS-CI) releases a surprisingly entertaining report detailing their efforts to protect the Treasury from scammers, fraudsters, and cheats. This year’s edition reveals that, due to budget cuts, activity is actually down. In 2014, IRS special agents initiated 4,297 criminal investigations (down 19.1% from 5,314 in 2013) and recommended 3,478 prosecutions (down 20.4% from 4,364 in 2013). There were 3,272 indictments and 3,110 convictions, which shows the IRS won’t take you to criminal court unless they’re pretty sure they can really nail you to the wall. And 80% of those who were convicted won themselves an all-expense paid trip to a federal penitentiary.

IRS-CI targets all sorts of misbehavior and shenanigans: Swiss banks, corrupt politicians, identity thieves, and crooked tax preparers. They also cooperate with other federal agencies, helping the Drug Enforcement Administration catch drug smugglers and the Department of Homeland Security block funding for terrorists. But some of the most entertaining stories fall under the “general tax fraud” category. Here are four to brighten your April 15:
•Smoke ’em if you got ’em: Billy Gene Jefferson claimed over $12 million in federal and state historic tax credits for rehabilitating a former Philip Morris tobacco factory and ten other buildings, then sold the credits to investors. Turns out he lied about how much he paid for the renovations. After Jefferson ‘fessed up to his fraud, the court released him on bond to sell properties to pay restitution. But he used his freedom to bury up to $2.5 million in cash in a PVC pipe behind his house, blow $2.15 million on trips to Vegas, and steal his brother’s identity to book a one-way charter flight out of the country! For his efforts, Jefferson will spend the next 20 years in an unrenovated facility where residents use cigarettes as currency.
•God hears all prayers? Archie Larue Evans was pastor of the Tilly Swamp Baptist Church and owned a gold and silver business in Florence, South Carolina. Evans sold his parishioners “investment contracts” paying higher interest than the piddly amounts they were earning at the local banks. The banks may not have been paying much interest — but they also weren’t running Ponzi schemes. Now, while we don’t know if the pastor confessed his sins to God, we know he didn’t report anything to the IRS. Now Evans will get to spend the next seven years ministering behind bars.
•Death and taxes: They say that nothing in life is certain except death and taxes. A group of six defendants in St. Louis, led by a disbarred attorney, found a way to roll both of those burdens into a single con. For 15 years, the group sold prepaid funeral contracts to 97,000 customers — promising to keep their money in a secure trust or insurance policy as required by state law. Instead, they “made use of funds paid by customers in ways that were inconsistent both with its prior and continuing representations and with the applicable state laws and regulations.” (That’s what prosecutors call it when you use your customers’ money to pay for a $16 million mansion in Nantucket, a charter yacht, and family vacations.) And because you’ll ask: no, they didn’t pay tax on the loot. The conspirators will spend up to 115 months behind bars, and owe their victims a cool $435 million. (Let’s see, now . . . that’s 11 cents/hour stamping license plates times how many hours?)
•Practicing “law” without a license: Diane Niehaus managed a bank in Centerville, Ohio, where her elderly customers entrusted their money. Despite that trust, she forged all sorts of documents, including fictitious gift letters and fraudulent powers of attorney, to steal over a million dollars from their accounts. She used the money to buy a $460,000 house and a different car for every day of the week. And of course, she forgot to tell the IRS about her new side venture. Oops! Now she’s spending five years at a prison camp in West Virginia, where she’ll get to discover if orange is really the new black.

Look, we know paying tax bites. But you don’t have to cheat to bite back. You just need a plan. There’s no shortage of court-tested, IRS-approved strategies for saving. So if you haven’t asked us about our planning service, what are you waiting for?