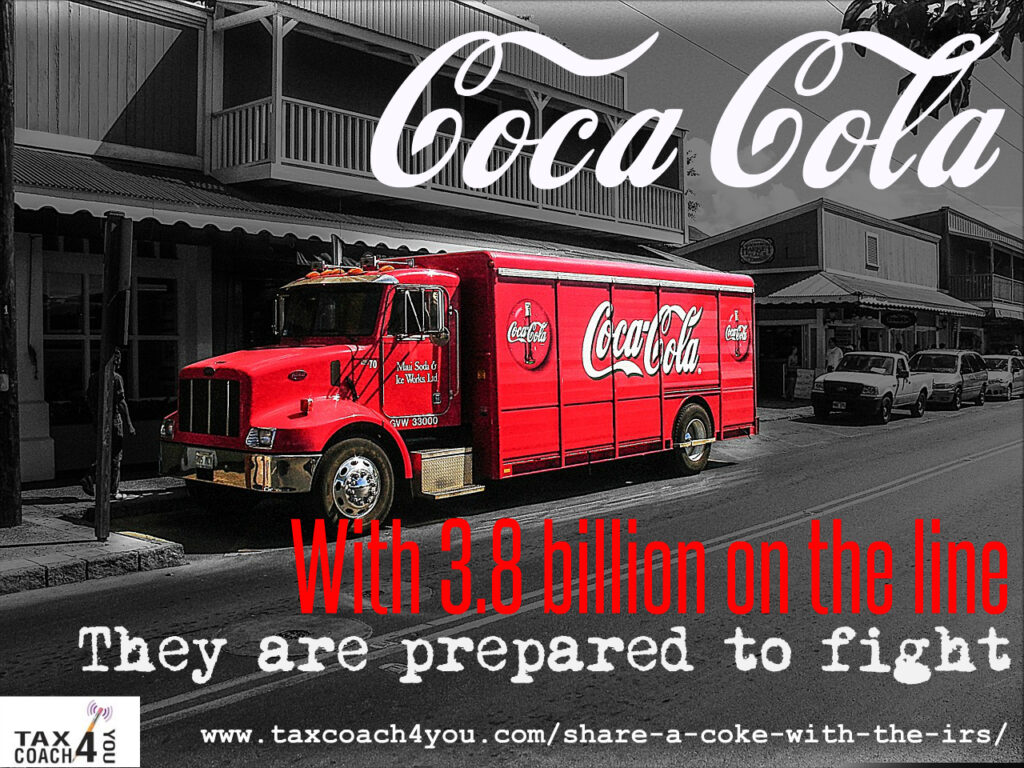 Coca Cola has earned a lot of headlines for their “Share a Coke with . . . ” marketing campaign, printing bottles and cans with 1,000 of the most popular names in the country, along with nicknames like “Mom,” “Dad,” Soulmate,” and “BFF.” You can even go online to customize your own bottle for just five bucks. (Just imagine the possibilities . . . “Share a Koke with a Kardashian” for reality-TV wannabes, or “Share a Diet Coke with Your Yoga Instructor” for fitness fanatics? The Center for Science in the Public Interest even created a “Share a Coke with Obesity” can.)

Last week, our friends at the IRS decided to open a little happiness of their own. And apparently, they want more than just a can or two of fizzy sugar water. On Friday, Coca Cola Enterprises filed a Form 8-K with the Securities and Exchange Commission revealing that, after a five-year audit, the IRS is dunning them for $3.3 billion in extra taxes. Plus interest! (Fun fact: the audit covered just three tax years from 2007-2009. That means the IRS spent more time auditing Coke’s income than Coke spent earning it!)

The issue centers on “transfer pricing,” which governs how businesses set prices between controlled or related entities. Let’s say Coca Cola sells a bottle of their delicious Vanilla Coke in Bermuda. (That sounds especially delicious, right?) How much of their profit should be taxed in Bermuda, where the average effective tax rate for multinational corporations is just 12%? And how much of it should be taxed back here in the U.S., where the rate tops out at 35%? That may not sound like a huge difference on something you can buy for a pocket change at a highway rest stop. But Coca Cola sells a lot of beverages — $46 billion worth last year. And 57% of that revenue comes from international markets.

With all that money sloshing back and forth across international borders, you can see how shifting tax rates on a few cents of income per drink can really add up. Transfer pricing issues may sound boring (and they are), but they’re a big deal. The very serious lawyers who specialize in these sorts of disputes work out of stuffy offices in high-rent big-city buildings, and they’ve never even heard of casual Fridays.

Naturally, the folks at Coke don’t think it will be especially refreshing to send the IRS an extra $3.3 billion:
“The Company has followed the same transfer pricing methodology for these licenses since the methodology was agreed with the IRS in a 1996 closing agreement that applied back to 1987. The closing agreement provides prospective penalty protection as long as the Company follows the prescribed methodology, and the Company has continued to abide by its terms for all subsequent years. The Company’s compliance with the closing agreement was audited and confirmed by the IRS in five successive audit cycles covering the subsequent 11 years through 2006, with the last audit concluding as recently as 2009.”

Coke says they plan to file a notice challenging the deficiency in Tax Court. They’ve reassured shareholders that they have “adequate tax reserves,” which means they can pay up if they lose. And if all else fails, they’ve got that secret formula locked up in a vault in Atlanta. That’s got to be good for something, right?

Here’s the bottom line. Coke makes billions of dollars a year. But they understand it’s what they keep that counts, and they’re willing to fight to keep more. Shouldn’t you be working for the same goal? So call us for a plan, and pay for your next Coke with the savings. It’s the real thing!