Alibaba and the Forty Percent 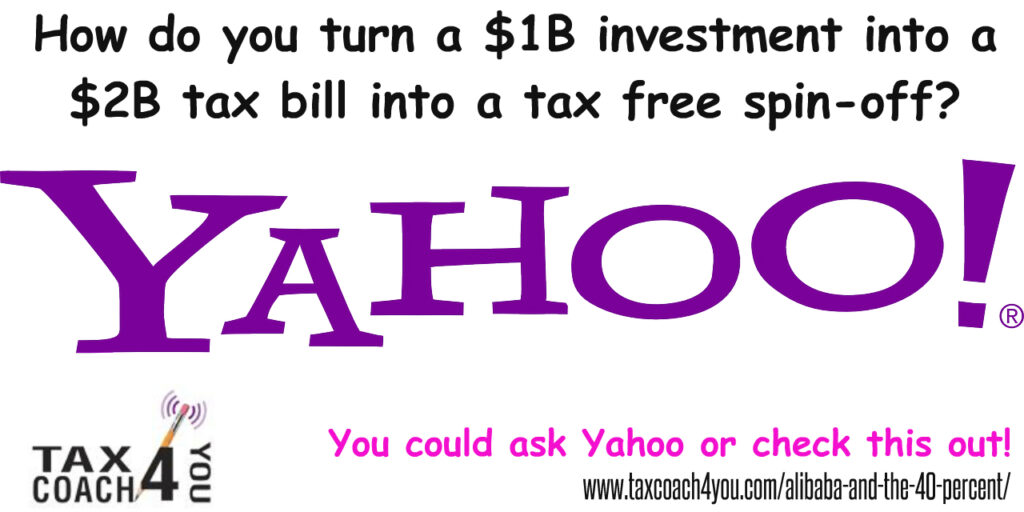 Turn on the financial news and you’ll hear all sorts of explanations for the stock market’s ups and downs. Oh no, the Fed’s going to raise rates! Oh no, they’re not! Who knows what the real answer is? But last week, the IRS moved the market — when they casually signaled they wouldn’t be greenlighting Yahoo’s plan to spin off their remaining stake in the Chinese company Alibaba.

Yahoo was the first big online search engine, and they helped popularize services like free email addresses. It’s still the most-read news website and fourth-most visited site in the world. But those eyeballs just aren’t translating into dollars, especially now that search engine advertisers have surfed their way over to Google.

But Yahoo can brag about one grand-slam home run — back in 2005, they paid $1 billion for a 40% stake in Alibaba, “the Amazon of China.” Since going public, Alibaba’s “market capitalization” (the total value of outstanding shares) has climbed as high as $248 billion. (It’s down to a paltry $162 billion today.) In fact, some analysts argue Yahoo’s entire market capitalization was worth less than its holdings in Alibaba and Yahoo Japan, making its core U.S. businesses worth less than zero!

Naturally, Yahoo’s long-suffering shareholders want to unlock that value. So when Alibaba went public, Yahoo sold a slice of their stake for $7.6 billion — but therefore got hit with a $2 billion tax bill. The folks at the IRS said “Yahoo!” But shareholders, not so much.

Earlier this year, Yahoo proposed a different strategy for the rest of their stake. First, create an entirely new company. Then stuff it full of their remaining Alibaba stock, along with a dinky slice of Yahoo’s remaining operating business. Then spin it off to their existing shareholders. Why jump through all those hoops? Well, if Yahoo just distributes cash and prizes like the Alibaba stock, the IRS gets their usual cut. But if they include an active trade or business in the new entity, Code Section 355 says it’s tax-free. (Wink, wink.)

There’s just one problem. The IRS doesn’t say how big that operating business has to be to make the whole thing work. Would a lemonade stand work? How about a hot-dog cart? Just to be sure, Yahoo went to the IRS to get their blessing first. They applied for a “private letter ruling,” which is a written ruling that interprets and applies tax laws to one specific taxpayer’s facts. Fees for a letter ruling range from $625 to $50,000, which makes them a cheap form of insurance against billions in taxes. (Of course, the kind of law firm that handles those sorts of requests can run up that much in legal fees just answering the phone!)

Here’s where our story gets interesting. Last week, an IRS attorney announced at a bar association conference that the IRS was “reconsidering their ruling policy” on spinoff requests — and Yahoo’s stock price promptly dropped 7.6%. That meant over $2 billion in value vanished in a heartbeat. Now, Yahoo can certainly proceed with the deal. They still have an opinion letter from their lawyers telling them it will work. But their profile is high enough that they’re under constant audit. It’s not like they can pretend they never asked for the ruling, or just hope that nobody at the IRS “notices” the spinoff!

Here’s the lesson. Tech companies like Yahoo understand the value of proactive tax planning. They’ve used it to save billions in taxes, and they realize the money they spend on it is an investment, not an expense. Shouldn’t you take advantage of that same opportunity yourself?

← Working Woman Entrepreneur Share a Coke with the IRS →