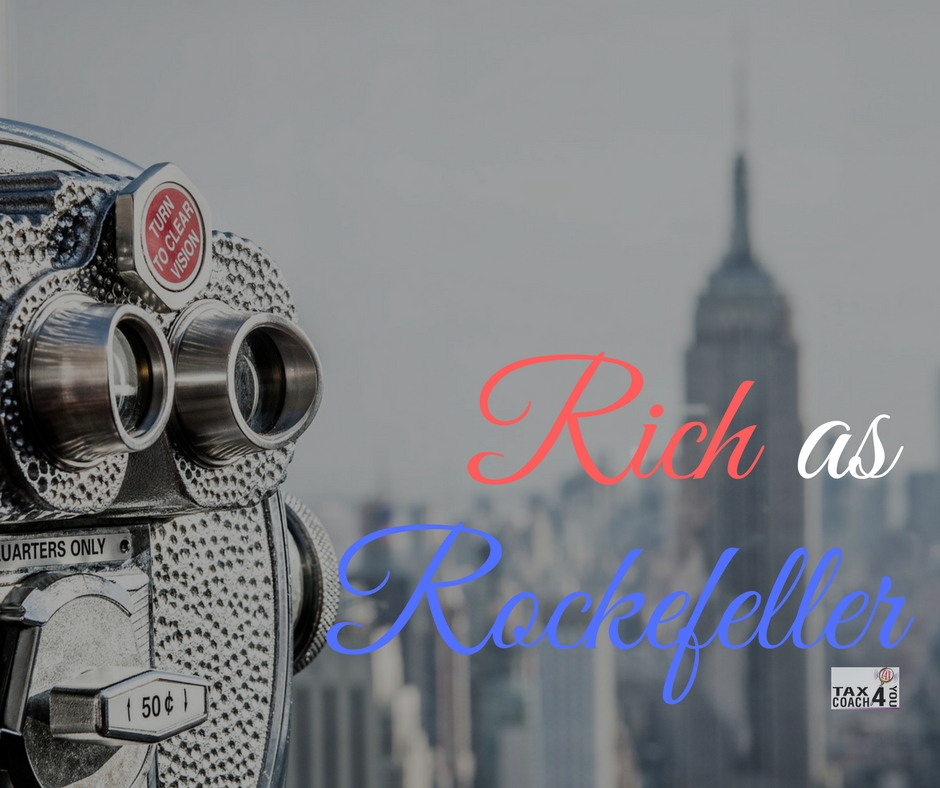 Last week marked the end of an era as David Rockefeller, the last grandchild of Standard Oil baron John D. Rockefeller, died at age 101. Rockefeller, whose name was once synonymous with “wealth,” symbolized the eastern establishment in all its glory. His death marks a last living link to an age of robber barons-turned-philanthropists whose fortunes still shape our nation. Rockefeller Rich

Patriarch John D. Rockefeller launched the family fortune before Uncle Sam launched the income tax, which gave “Senior” a big head start. He started out in 1855 as a 16-year-old assistant bookkeeper in Cleveland, Ohio, with a 10-week accounting course under his belt. By 1911, he controlled 90% of America’s oil refining. The Supreme Court eventually broke his company into 34 separate pieces. But much to Rockefeller’s delight, those pieces became worth more than the original whole. By the time he died in 1937, he was worth the equivalent of $340 billion in today’s dollars. Rockefeller Rich

Rich Rockefeller had always been generous. He gave away six percent of his earnings even at age 16. But his fortune helped him really ratchet up his giving. He endowed the University of Chicago with a nondeductible gift equal to $2 billion in today’s dollars. (That’s because there wasn’t any tax to worry about then.) He founded Rockefeller University and made major gifts to Central Philippine University and Spelman College. Rich Rockefeller

Rockefeller’s son, John D. Jr, wasn’t quite so lucky. In 1923, when the IRS published everyone’s tax bills, he ranked #1 in the country, paying $7,435,169. In 1924, he ranked #1 again. And when the Wealth Tax Act of 1935 applied a special rate on income above $5 million, there was only one American who paid it — Rockefeller. Junior diversified the family’s holdings, financing the 16-building Rockefeller Center complex in midtown Manhattan and helping make Chase Manhattan Bank the world’s largest.

By then, Junior was taking advantage of charitable deductions for his own philanthropy. He gave $537 million to charity over his life, more than the $240 million he gave to his own family. He donated the land for New York’s Museum of Modern Art and the United Nations headquarters, and gave generously to renovate Colonial Williamsburg in Virginia.

David Rockefeller might have become like those spoiled rich brats you see on Instagram and reality television. He grew up in an eight-story house, the biggest ever built in New York. (Seven stories are for peasants, right?) He and his brothers roller-skated down Fifth Avenue, trailed by a limousine in case they got tired, and vacationed at the family’s 107-room cottage in Maine. But as an adult he expanded the family portfolio internationally, cutting banking deals with the Soviets, Chinese, and various oil-rich dictators. He was active in the Council on Foreign Relations and the Trilateral Commission. (If the Illuminati are real, you probably could have found David Rockefeller lurking somewhere near the center of it all.)

Time, taxes, and 150+ descendants have whittled down the Rockefeller fortune. Forbes magazine estimates the family is worth “just” $11 billion today. Ironically, two of the family’s charitable funds have announced that they will be selling all their fossil fuel investments as part of their commitment to fight climate change.

We realize you don’t have Rockefeller riches to protect. But we know you value what you have, and we know that smart tax planning is one of the best ways to preserve it. So call us when you’re ready to pay less!