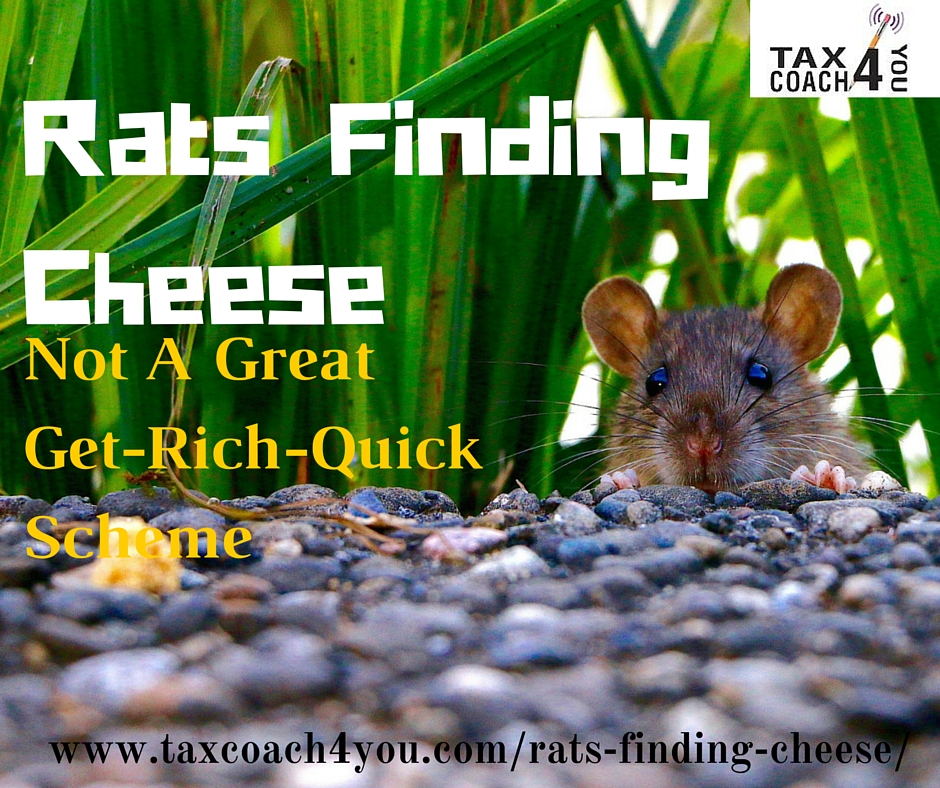 Anyone who’s ever watched a gangster movie knows there’s nothing worse than a rat . . . a snitch . . . a stool pigeon. Life is hard for that much-maligned species! In Martin Scorsese’s classic mob saga Goodfellas, Henry Hill rats out his partners in crime to get a reduced sentence — then pays the heavy price of having to “live like a schnook” in the witness protection program. But there’s one place where rats can earn fat cheesy rewards . . . in at least one case, over $100 million worth. And that’s with our friends at the IRS.

Congress established the IRS Whistleblower Office in 2006 to see if cold hard cash could motivate tipsters to rat out tax cheats. (Spoiler alert: It works.) The program pays rewards ranging from 15% to 30% of taxes, penalties, and interest the IRS collects in cases with $2 million or more at stake. Last week, the office released its 2015 annual report — and business is booming.

In 2015, the office closed out 10,615 claims. Nearly all of them wound up getting rejected: the allegations weren’t specific enough or “speculative in nature” (53%); the IRS was already investigating the target (11%); the amounts involved didn’t meet the $2 million threshold (10%); or the statute of limitations for actually collecting more tax had expired or was too close (7%). But there were still 99 whistleblowers who took home awards totaling over $103 million. That’s a lot of cheese!

That sort of success has given staffing at the office a boost. At the beginning of 2015, there were 42 full-time employees. By the end of the year, that number had grown to 61. But this may be one area where most Americans think they’re getting their money’s worth from their government — since 2007, the program has paid $403 million in awards and collected over $3 billion in tax.

Most whistleblowers remain anonymous, for obvious reasons. But the office has handled the occasional high-profile case, too. In 2012, the IRS paid former Swiss banker Bradley Birkenfeld a whopping $104 million for information leading to a $780 million fine. (He also spent 40 months in jail for the crimes that led him to having that information in the first place — but that’s a tradeoff a lot of taxpayers would be willing to consider!) In a more controversial example, David Danon, a former tax lawyer for the Vanguard Group, has alleged the low-cost index fund provider’s corporate structure is an elaborate tax dodge and that the company owes $35 billion in back taxes.

Before you give up your day job for a career ratting out tax cheats, consider this: It’s not a get-rich-quick scheme. The IRS pays awards out of actual collections, which means no payday until after the taxpayer you’re blowing the whistle on has exhausted all of their appeals and the statutory period for filing a claim for a refund has expired or been waived. That typically means it takes five to seven years before your cash is in your hands. (And don’t forget that you’ll owe tax on your reward, too!)

We realize you’re not likely to end up on either side of a tax whistleblower claim. But we know you want to pay less. And you don’t need to rat anyone else out to do it. You just need a plan. So call us when you’re ready to stop wasting more on the IRS than you absolutely have to!