Profit shouldn’t be an afterthought, but that’s the way most service business owners treat it. They put profit as the last priority, at the end of the line of sales, expenses, payroll, taxes, and everything else in their business, and what do you think happens when something isn’t a priority?

There is another way of looking at things. Instead of leaving your business’s profit as the table scraps you can put it in its rightful place as the main course. All you have to do is flip the script on a familiar formula you’ve probably seen before.

There is one major problem with this formula, and when you think about your experience in your business you’ll see it too.

There’s a well-known rule called Parkinson’s Law. Parkinson was a smart guy, he observed that whatever resources are available will tend to be used. In the case of a big project, whatever deadline you assign to it, it usually takes all the time available to get it done.

In the case of your business’s bank account, it’s always going to seem like there is something to spend money on. Extra material, higher than expected labor costs, additional tools or software, a larger than realized tax bill.

This means that the last part of the equation is almost always minimized to the point where I’ve worked with tons of business owners who were stressed out and wondering “where did all the profit go?

The trouble is you put profit in last place, so it’s no wonder there’s not much left at the end for you as the owner.

So what’s the solution? Like I said we flip the script. 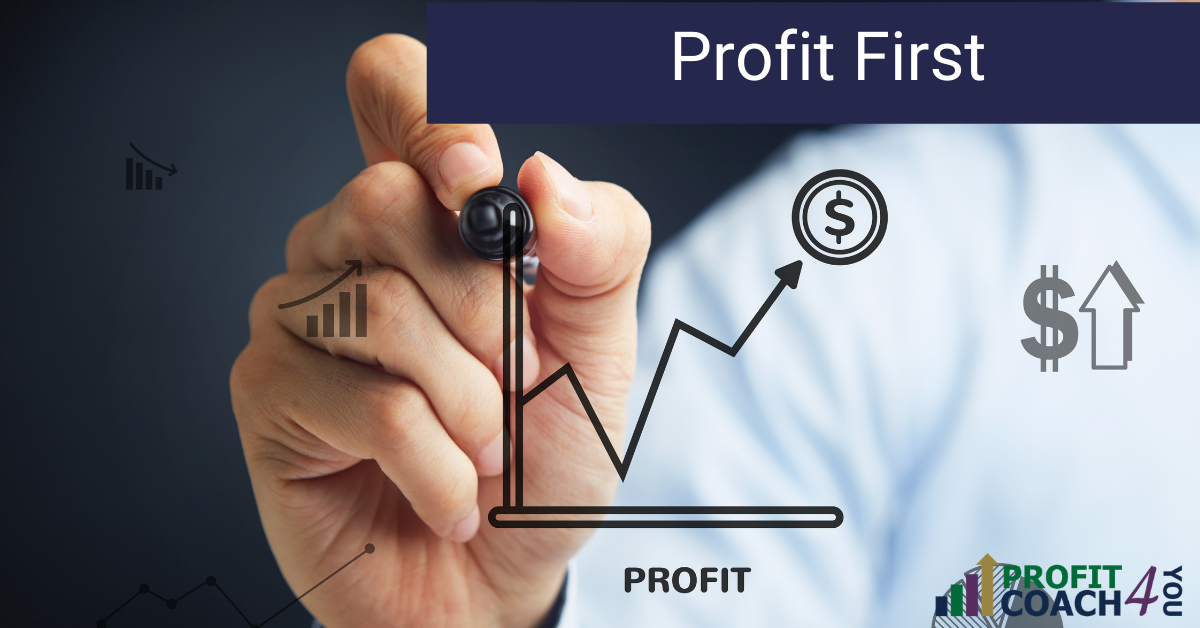 In this formulation, we put profit in the driver’s seat, where it should be.

It’s more than a mindset shift, although that’s a big part of it too. By putting the focus on profit, you start to see ways to structure your business to fit the new Profit First paradigm. In this case, Parkinson’s law is working in your favor with your expenses conforming to fit what’s leftover.

The secret is in starting small, taking regular actions, and working with a Profit First professional like myself to help you implement the plan and stick to it.

Thousands of businesses across the U.S. and around the world have embraced the Profit First philosophy and are now enjoying higher profit rates than ever before, even in spite of challenges, such as the COVID pandemic.

The key is in being intentional about taking your profits first by moving them out of the operating bank account and putting the money into a separate bank account on a regular basis.

In the beginning, we’ll figure out your long-term goals and then structure your accounts accordingly. We’ll set up additional accounts within your existing business bank account. One for-profit, one for owner’s pay, and one for taxes.

Then every two weeks or so we start moving predetermined percentages of whatever money was deposited that period into those accounts. You start taking your profit first. Setting it aside and making sure that you’re taken care of.

Then we start looking at the expenses side of the balance sheet and see where we can make some cuts and improvements to efficiency.

A great example of this is one of my clients named Steve.  Steve came to me stressed out. He had a successful HVAC company that had grown considerably over the past several years, but he found that instead of becoming more profitable as his company grew it actually became less profitable! Not only that, but it also became a major headache and source of stress as Steve had to keep working long hours to make sure the cash flow could keep everything running smoothly.

By the time he came to me he was getting burnt out and needed a solution ASAP.

Fortunately, Steve had a successful business that just needed some guidance in the form of the Profit First principles.

After preparing a Profit First assessment report, we determined that he needed to trim his overhead costs from 65% to 45% so he could take a paycheck on a regular basis, have the money to pay his income taxes, and put money into a Profit Account.

Steve was excited to have a plan and knew he was going to need some help in implementing this plan.

We knew that he could make a 20% cut to expenses right away without wrecking his business. So, his plan consisted of starting with weekly transfers of 2% into his Profit account, 2% into his Owner’s Pay account, and 2% into his Taxes account.

This was going to require decreasing the expenses by 6%, which he felt was possible. Then over the next 6 quarters, the percentages would be adjusted until they moved into alignment as Overhead 45%, Income Tax 15%, Profit 15%, and Owner’s Pay 25%.

Next, we went to work in helping him identify overhead expenses that could be cut so he could fund his new account transfers.

It was great to watch as Steve started to understand how his business ticked and where all the money was going.

In one of his weekly team meetings, they identified a few costs that were being duplicated between his service department and his sales team. These costs were immediately cut which added approx. $17,300 annually to the bottom line profit.

There were several more areas where costs were identified and then cut. Within a couple of months, Steve had added $62,840 to his bottom line. He was excited now!

Over the months his team and his business became more efficient as they started implementing more systems and processes. Remember, what you focus on grows!

All of these changes resulted in profit added to his business’s bottom line.

Steve continues to work the system today and his business is more successful than he ever imagined it could be. He takes a quarterly profit distribution from his profit account and doesn’t have to worry about doing “one more job” to have the cash flow to cover taxes or payroll or any of that.

If you are interested in becoming more profitable in your service business, I’d like to invite you to take our Profit Meter quiz at www.profitcoach4you.com

You can find out where your business stacks up in the Profit First paradigm and what steps you can take to start making profit a priority today!