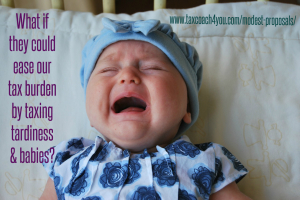 Here in America, most of our tax debates center on “income.” How do we define it? How do we count it? What do we get to exclude from it, deduct from it, or credit towards it. And finally, how much of it do we take, to make sure everyone pays their “fair” share. The end result is our tax code, a many-headed hydra that several wags have noted contains twice as many words as the Bible, but with none of the good news.

Of course, income isn’t the only thing we tax. Uncle Sam and most states tax sales. They tax estates and inheritances. They tax medical devices. They tax booze and cigarettes to discourage consumption. (Of course, the real addicts are the governments who count on that revenue!) Politicians of both parties have even proposed taxing carbon emissions and financial transactions.

So, that got us to thinking . . . what else could clever politicians think of to tax? Who would be the winners under the new rules? And who would be the losers?

Excuses. They say excuses are like . . . well, you know — everyone’s got one. Here’s the thing. Nobody likes hearing excuses, but it’s hard to make it through the day without making at least one or two. That makes them perfect for taxing! Big winners under an “excuse tax” include every annoying perfectionist you’ve ever known in your life, who skates by without ever paying the tax. Big losers would include the quarterback who throws the game-losing interception, the actor who releases the latest Hollywood bomb, and all 535 members of the United States Congress!

Showing Up Late. We all know how irritating it is to work hard to be ready on time, then sit around waiting for someone else to show up. So why not tax it instead of just grumbling? A “tardy tax” would raise millions, at least in theory. The hard part, of course, would be waiting for people to actually pay it. (Hmmmm, maybe not such a good idea after all.)

Snooze Buttons. Pretty soon we’ll reach a point when everything we own is wired to the internet — even our alarm clocks! That will make it easy to impose a snooze button tax. Hit the button for nine more blessed minutes of sleep, and the IRS automatically “dings” your iTunes account for a buck or two. But just watch those collections grow! Clearly, the Monday after the Super Bowl will be the most lucrative day in government history!

Screaming Children. Whitney Houston sang “I believe the children are our future. Teach them well and let them lead the way.” Kinda makes you wonder if she ever had to sit through a four-hour flight with a toddler screaming her head off about a toy, a snack, or a loaded diaper. (Hint: it’s not really “First Class” if there’s someone else’s baby throwing a fit across the aisle from you!) Look, we know our kids are always adorable little angels — but wouldn’t it be great if we could make a little tax revenue from someone else’s screaming brat?

What do you think? Let us know what you’d like to see taxed, and maybe we’ll compile them for a future email.

In the meantime, of course, we’re still stuck paying traditional income taxes, and still stuck wishing we could pay less. And the best way to do that is to make a plan. So stop making excuses, stop hitting that snooze button, and call us for your plan!

← The Most Wonderful Time of The Year? The Postman Always Rings Twice →