Getting mail from the IRS is rarely som 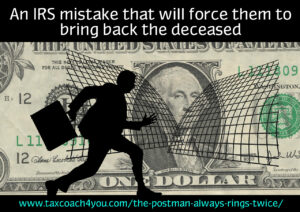 ething to celebrate. If it’s a bill, consider yourself lucky — at least you can just pay it and be done. If it’s a “CP 2000” notice proposing a change to your taxes, get ready for a ride on the paperwork tilt-a-whirl. If it’s an audit notice, all bets are off. (Relax — it only feels like you’re a prisoner at a CIA black-ops site.)

But one taxpayer may have won the booby prize for “worst IRS correspondence ever” when he got a letter helpfully notifying him he had died. Deceased. Croaked. Bought the farm.

Siegfried Meinstein is 94-year-old World War II veteran. He’s currently enjoying his retirement in an assisted-living facility just outside Columbus, Ohio. And granted, he is 94 — but plenty of 94-year-olds are doing just fine, thank-you very much. Here’s how Fox News summed up his story:

” . . . The old-timer’s troubles began in April when he filed his tax return online through his accountant. The IRS rejected the return and the reason given was because the filer was dead according to the Social Security Administration.

A few days later, Meinstein and his son went to the Social Security office in Columbus and were told that their records did not list the elder Meinstein as deceased. The office gave the Meinsteins a letter to send to the IRS. They did, only to have the IRS kick it back to Social Security.

There was some back-and-forth and then Meinstein and his son visited the local IRS office where they were informed that the problem would be resolved.

Instead, the senior citizen received a letter from the IRS that said, ‘We are unable to process your tax return. Our records indicate that the person identified as the primary taxpayer…was deceased prior the tax year shown on the tax form.'”

The IRS sent another letter reminding him that he was still dead in September. And again in November. His daughter-in-law appealed to the Taxpayer Advocate’s office, which resolves problems that fall through the regular IRS cracks, and they said they had miraculously brought Meinstein back to life. Then, like a bad penny, the letter showed up again in December. The IRS says they’re working to resolve the problem. But of course the gears of bureaucracy grind very slooooooooowly, and they’re slowing even further after recent budget cuts. Here’s hoping the IRS gets it all fixed before Meinstein owes estate tax!

In the meantime, being dead doesn’t seem to be cramping Meinstein’s style. “It isn’t really a problem in my daily life,” he told the Columbus Dispatch. “Everybody accepts my money.” Even the IRS still cashes his checks!

If you’re alive to read this, congratulations! Dealing with taxes isn’t much fun, but it’s a key to your financial defense, and a crucial part of any financial plan. So call us when you’re ready for a plan to pay less, and here’s to a long and healthy life!