We Bring Good Things To Boston 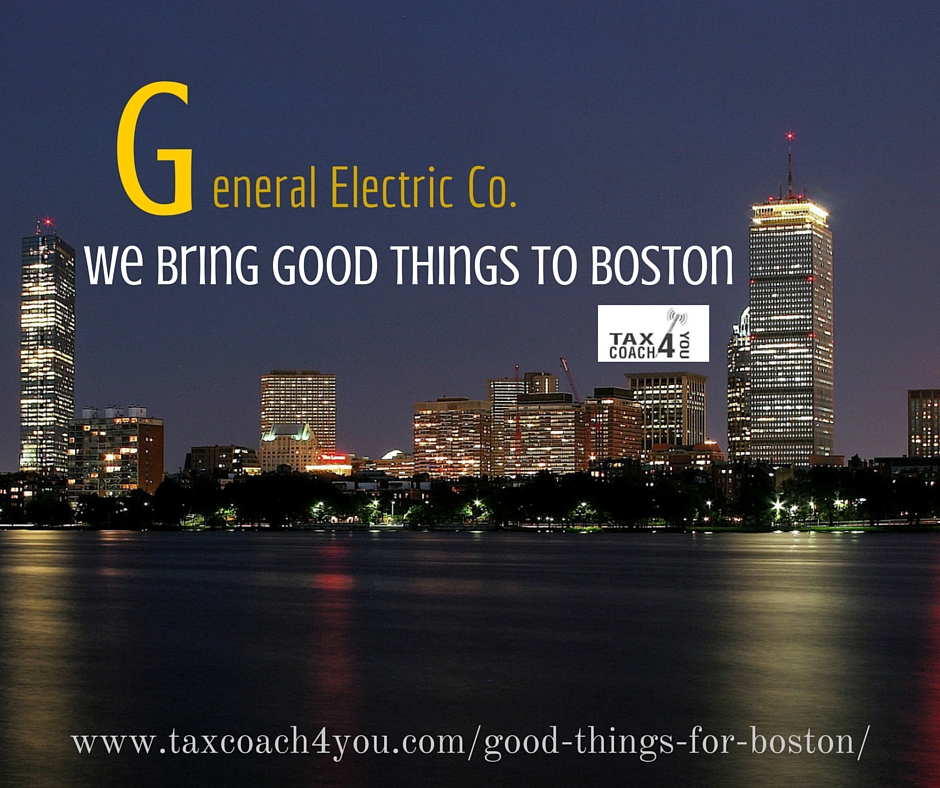 Way back in 1889, the inventor Thomas Edison and the financier J.P. Morgan put their heads together to create the Edison General Electric Company. Just seven years later, it was one of the original twelve companies listed on the new Dow Jones Industrial Average. Today, GE is the fourth-largest company in the world. It’s the very model of a modern “multinational,” with 350,000 employees generating $150 billion in annual revenue from jet engines, financial services, clean energy, life sciences, appliances and lighting, and railroad equipment.

Naturally, all that money sloshing around attracts the tax man’s attention. GE files literally thousands of tax returns every year, for every country in the world (or at least every one that requires a tax return), every state in this country, and more cities than you can name. Their federal Form 1120, which is the corporate equivalent of your Form 1040, runs over 50,000 pages — and it gets audited every single year. So naturally, GE works hard to avoid paying anything more than it has to. The New York Times reports that the company’s tax department “is often referred to as the world’s best tax law firm,” and its staff of 975 lawyers takes advantage of every trick in the book to pay the legal minimum. And all that work pays off — from 2008 to 2012, the company paid zero federal corporate income tax.

40 years ago, GE moved its headquarters out of Manhattan to suburban Fairfield, Connecticut, a WASPy town on the coast of Long Island Sound. But last year, Connecticut legislators adopted a budget that raised taxes by $1.9 billion statewide. The very next day, GE chairman Jeffrey Immelt stamped his little foot and said “I’m taking my ball and playing somewhere else!” Who would have expected him to wind up in the commonwealth formerly mocked as Taxachusetts?

That’s right, GE has announced they’re moving their headquarters and 800 jobs to Boston’s Seaport District neighborhood. (No word yet on whether the company’s Yankees fans will be expected to start rooting for the Sox.) The city’s concentration of elite universities and innovative tech firms was the main draw. But city and state officials seasoned that chowder with one of the richest incentive packages in Massachusetts history, too.

It seems that old “Beantown” offered up to $25 million in property tax breaks. Massachusetts state officials have added up to $145 million in grants, infrastructure improvements, and help with real estate acquisition costs. But the brightest light of all is a special discount on state corporate taxes.

Massachusetts imposes a corporate excise tax of $2.60 for every thousand dollars of Massachusetts tangible personal property or taxable net worth, plus 8.0% of net income attributable to Massachusetts. But the state offers what they call a “single sales factor apportionment” break to three specific industries: defense contractors, mutual fund managers, and manufacturers. That break lets eligible companies pay tax solely on their in-state net income. The state’s Department of Revenue reports that this break saved qualifying companies over $3 billion in tax from 1996 to 2011. GE has confirmed that they plan to cash in on the same break moving forward.

Now, you probably don’t have the option to simply pull up stakes and move just to save some tax dollars. The good news is, you don’t have to move to pay less. You just need a plan — the same sort of plan that lets GE minimize its tax burden. So call us when you’re ready to pay less, and keep rooting for the home team!