Oops! You Fail To File Taxes 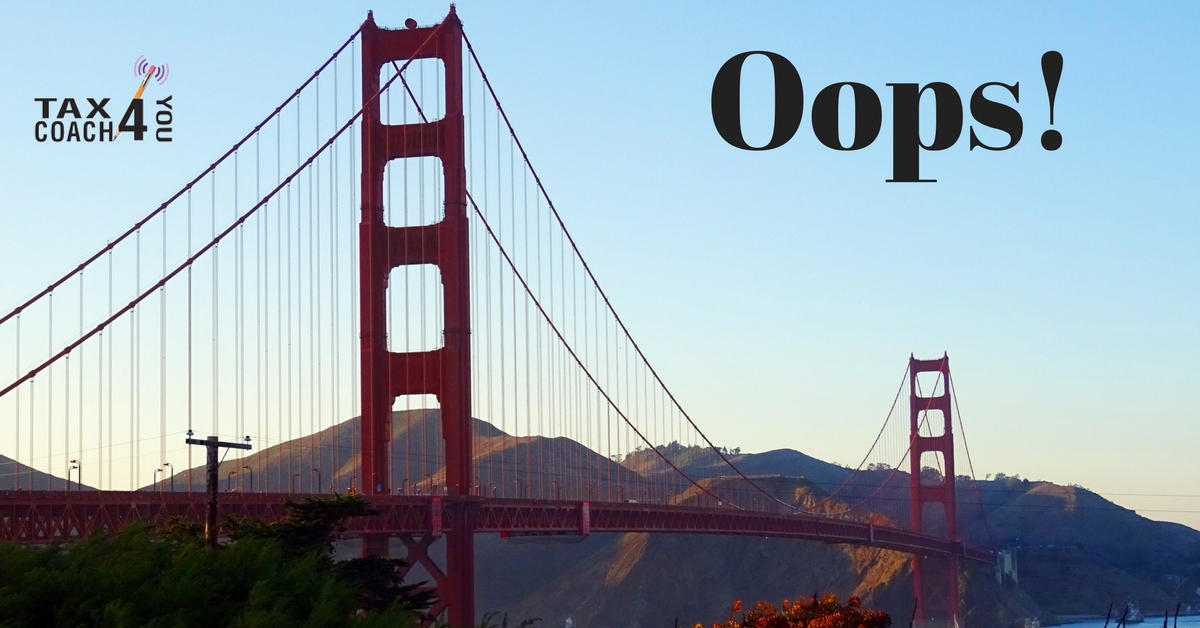 Mark Twain once said, “Never put off till tomorrow what may be done the day after tomorrow just as well.” But Twain’s advice doesn’t always pay when it comes to taxes. The calendar watchers at the IRS charge a 5% per month failure to file penalty, up to 25% of the amount due, along with a half %  per month failure to pay penalty, also up to 25% of the total amount due. And the IRS isn’t the only tax man to pay attention to deadlines, even if they don’t loom as large in our minds as April 15.

Presidio Terrace is a private block-long oval of a street in San Francisco’s pricey Presidio Heights neighborhood, lined with 35 multimillion-dollar mansions. Residents have included Senator Dianne Feinstein, Representative Nancy Pelosi, and former San Francisco Mayor Joseph Alioto. There’s a stone-gate entrance to the street, a rent-a-cop stationed at the gate to keep out snoopy mcsnoopfaces, and a manicured island inside the oval for residents to enjoy.

The street and sidewalks are owned by a homeowners’ association made up of surrounding residents. Because it’s private, the association pays tax on the property — in this case, a whopping $14 per year. Now, $14 may not sound like it can power a lot of local government but the city still wants their money. So, every year, the Treasurer-Tax Collector dutifully mails the bill to the association’s accountant on nearby Kearny Street.

There’s just one teensie-weensie, tiny little problem. That accountant hasn’t worked for the HOA since the 1980s. (Oops.) That means the bill hasn’t been paid since MTV still played music videos and Madonna was a doe-eyed ingenue. Suddenly, $14 per year snowballed into $994 in taxes, penalties, and interest. Most of the street’s residents could have covered it with spare change from their couch cushions. But the city went ahead and put the street up for auction!

Enter Michael Cheng and his wife Tina Lam, real estate investors from nearby South Bay. Cheng spotted the listing for the auction and smelled money. He wasn’t the only bidder looking to pick up this particular opportunity. But he outlasted the rest and, for $90,100 — sight unseen — the street was theirs!

So how can a couple of scrappy young real estate investors monetize their ownership of a block-long street surrounded by card-carrying 1%-ers? Start with parking. The street has 120 spots, which make it a potential gold mine in a city where a single parking space recently sold for $80,000. (And if the folks on the street don’t want to pay to park in front of their own houses, maybe the Chengs could rent spots to the peasants living outside the gates?)

Needless to say, the people who actually live on Presidio Terrace aren’t nearly as excited about paying to park on their own street as the investors who just bought it. The residents have hired an attorney, of course. (Funny how many of these weekly stories involve hiring an attorney.) They’ve petitioned the city to void the sale, and scheduled a hearing for October. And they’ve sued the city to stop the Chengs from flipping the street to anyone else until after they’re done with that fight.

Twenty years ago, an author named Richard Carlson made a fortune selling a book called Don’t Sweat the Small Stuff: and It’s All Small Stuff. Unfortunately, sometimes you really do have to sweat the small stuff. Fortunately, you’ve got us. So let us sweat it for you, and save you a buck or two in the process!