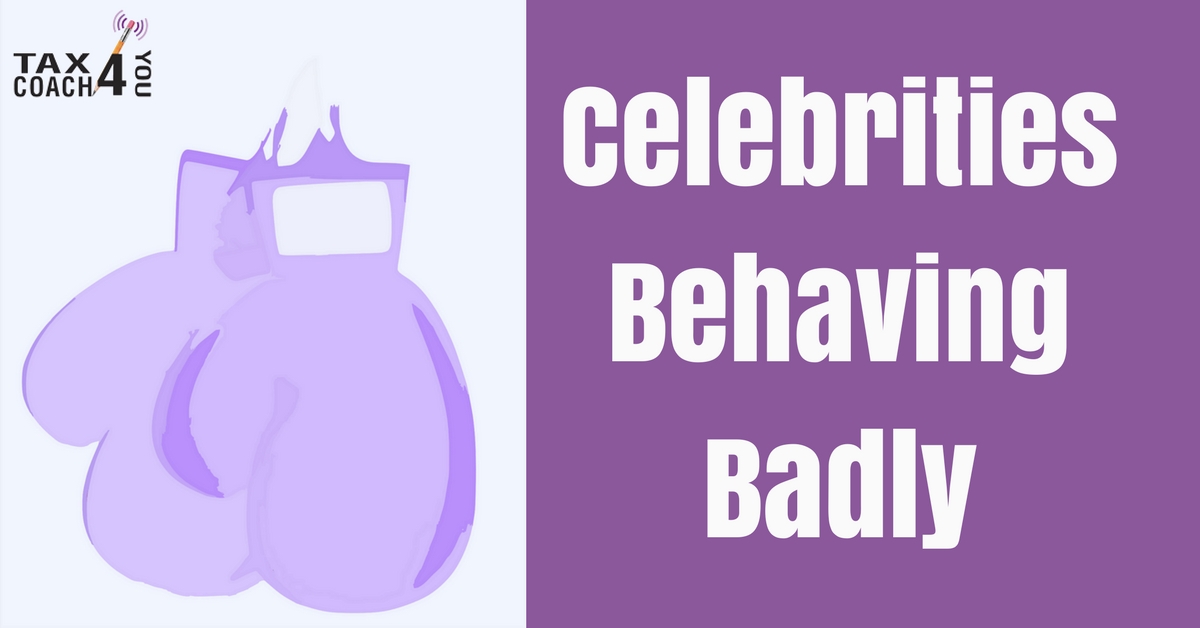 One day back in March, 2002, Us Weekly editor Bonnie Fuller spotted a photo of actress Drew Barrymore bending over to pick a coin off the ground. A light bulb flipped on over her head, and on April 1, her magazine debuted a brand-new photo feature that changed the paparazzi game forever. We’re talking, of course, about “Stars — They’re Just Like Us.” (Of course, they’re still not quite just like us . . . how many photographers are fighting to catch pictures of us picking up our dry cleaning, filling up our gas tanks, or trying to pick the ripest avocado at Whole Foods?)

Here’s something else the stars share with us. They don’t want to waste money on taxes they don’t have to pay. And since they tend to make more money than we do, they tend to owe more taxes. So that pain over unnecessary tax is greater for them than it is for us! (Who says money solves all your problems?)

But sometimes they go a little too far to pay less. And that’s when they discover our friends at the IRS lying in wait. Here’s the problem: the IRS doesn’t have nearly enough money to make sure everyone is paying their legal share. Audit rates are down to historic lows. So when they get a chance to make examples of bold-faced names, they’re sure to jump on the case — even if Us Weekly won’t be combing Tax Court filings and Justice Department press releases the way we do.

Our first story this week involves boxer Floyd Mayweather, who’s made as much money with his fists as any man alive. Back in 2015, he earned a reported $220-230 million for defeating Manny Pacquiao in the Fight of the Century. (Granted we’re less than one-fifth into the century, but the payday itself lived up to the hype even if the fight didn’t.) Unfortunately, Mayweather doesn’t have anyone to withhold taxes from that paycheck.

Mayweather isn’t disputing how much he owes. He says he just doesn’t have the cash to cover it. ($15 million worth of cars in his garage, sure. Cash in the bank, not so much.) So he’s asking the Tax Court to grant him a short-term installment agreement and waive his failure-to-pay penalties. He’s argued that he has “a significant liquidity event” coming up in approximately 60 days, by which he means his next fight of the century, a potential $400 million payday against MMF superstar Conor McGregor.

This isn’t Mayweather’s first bout against the IRS. In 2008, they filed a $6.7 million lien against him for 2007 taxes. Mayweather won that fight on points, settling for $5 million. Last year, the Tax Court ordered him to pay $1,627,563 for 2006. Also last year, he sent a Las Vegas strip club a 1099 for $20,323 he spent on strippers on May 25, 2014. Apparently he understands that “making it rain” is a taxable event, but thinks it’s the club’s responsibility to cover the taxes for the dancers who actually took home the cash.

Rapper DMX (real name Earl Simmons) is also feeling some summer heat from the IRS. On July 13, he was arrested on 14 counts of tax fraud. Feds say he turned the tables by using bank accounts in other peoples’ names while fronting his expenses in cash. The haters at the IRS say he didn’t pay $1.7 million in taxes he owed from 2002-2005, and failed to file returns entirely from 2010-2015.

Look, we know you don’t want to pay more tax than you have to. And we know you’re not willing to risk an appearance in the news (or court!) to pay less. But you don’t have to feel stuck between a rock and a hard place. You just need a plan. So call us when you’re ready to lace up your gloves, and let us take your corner!

← Caliente! Making More by Paying Less - Save on Taxes →