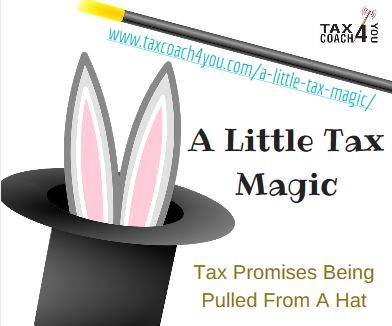 You already know that our Congress is as gridlocked as at any time in recent history. Budget and spending bills get rolled up into year-end monstrosities. Urgent priorities like immigration reform get hijacked by partisan posturing and “appeals to the base.” The wizard Merlin himself would have a hard time pulling a sword from the solid block of stone that is today’s U.S. Senate.

So here’s a welcome breath of legislative fresh air that everyone can support. Representative Pete Sessions (R-TX) and six colleagues have introduced House Resolution 642 “recognizing magic as a rare and valuable art form and national treasure.” Magic “is timeless in appeal and requires only the capacity to dream,” they say. It “transcends any barrier of race, religion, language, or culture.” It even helps children with disabilities improve their physical and mental dexterity and build confidence.

You know who else seems to like magic? The candidates offering tax plans as part of their effort to succeed Barack Obama as President of the United States!

Take Republican Donald Trump, for example. He’s drawn attention for his proposal to eliminate the “carried interest” loophole that lets private equity fund managers pay tax at preferential long-term capital gain rates on much of their income. But he also proposes to cut taxes to 15% on business income and 25% on individual income. He would also eliminate tax for singles earning less than $25,000 and joint filers earning less than $50,000, eliminate the marriage penalty and the alternative minimum tax, and make the estate tax vanish into thin air. Sounds great, right?

But what does that tax plan do to the the country’s financial health? According to the Committee for a Responsible Federal Budget, those proposals would pull $12 to $15 trillion more debt from a hat. To balance the budget, spending would need to be cut by 40-80%, or the economy would have to grow by over 10%.

Trump isn’t the only Republican with a little magic up his sleeve. Texas Senator Ted Cruz promises that on his first day in office, he’ll saw the IRS in half. (Conveniently for the rest of us, he won’t be putting it back together.) He also promises we’ll be able to do our taxes on a postcard. (That’s sort of a “card trick,” right?) And former candidate Marco Rubio promised to make capital gains taxes disappear in a puff of smoke. “There’s just a lot of magical thinking going on on the Republican side,” says Len Burman, director of the Washington-based Tax Policy Center.

Republicans aren’t the only ones counting on some fiscal sleight-of-hand to make ends meet. Everyone’s favorite Democratic Socialist, Bernie Sanders, promises to nationalize health care, make public colleges tuition-free, and raise taxes on the rich. But New York magazine has accused him of “thinking like a Republican,” citing four former chairs of the Council of Economic Advisors who hit Sanders for “magic math” claims that his plan would lead to 5.3% economic growth and 300,000 new jobs per month. And while nobody has accused Hillary Clinton of magical thinking, she’ll need a fair amount of sorcery to get her plan through Congress.

Look, we all wish we could wave a magic wand and make our tax bills vanish. But unless Penn & Teller run for the White House, that’s not going to happen. What’s the next best thing? A proactive plan can save you far more than a rabbit hidden in a hat. So call us today and see if we can make some taxes vanish!