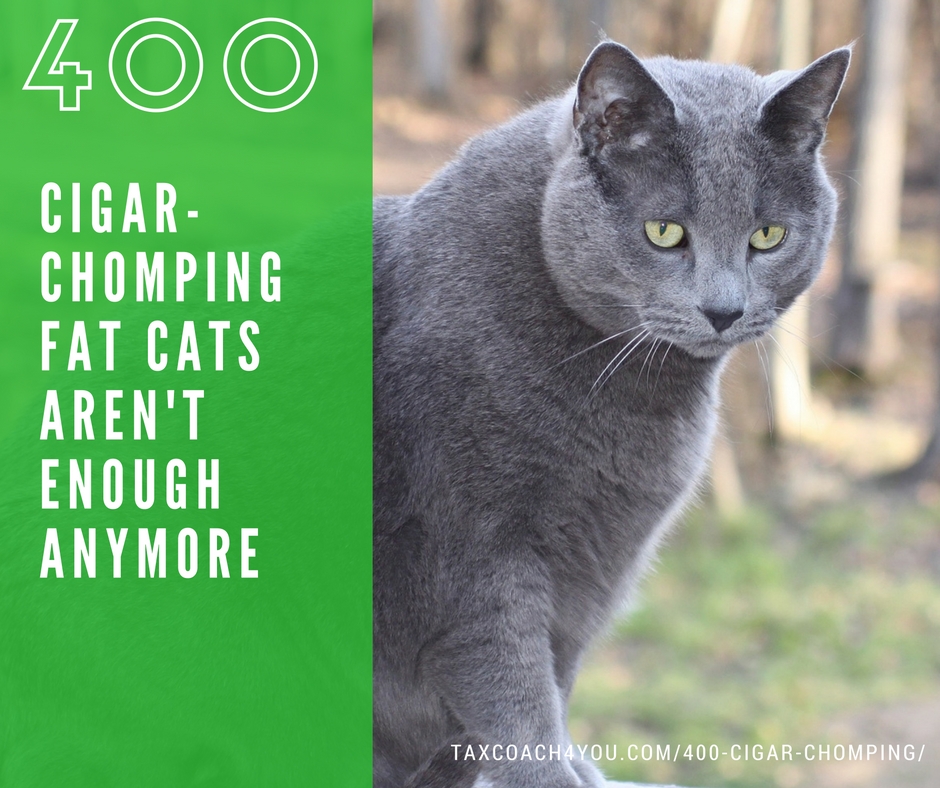 Author F. Scott Fitzgerald, who brought us the Great Gatsby among other well-heeled characters, once said the rich are very different from you and me. To which Fitzgerald’s jazz age compatriot Ernest Hemingway sarcastically retorted, “Yes, they have more money.” But how much more money do they really have? Nosey parkers want to know! IRS

Every year, the financial snoops at the IRS release a study analyzing the income and the taxes of the top 400 earners in the country. We’re not talking ordinary 1%ers here — we’re talking card-carrying plutocrats. If you show these people your Hamptons house, they’ll raise you their bigger Hamptons house, right on the beach — plus a penthouse in Manhattan plus a ski chalet in Gstaad plus a second beach house in St. Bart’s. IRS

Last week, the IRS released their report for 2014, and revealed that the country’s 400 fattest cats had gotten 20% fatter. It took $127 million of adjusted gross income to join the top group, up from $100 million in 2013. But that was just the ante — the average income was $318 million, 20% more than the previous year. The 400’s total income was $128 billion, which is just a few billion shy of Nevada’s Gross Domestic Product.IRS

Where does all that money come gushing in from? It’s not salaries and wages (4.47% of the total), interest and dividends (15.13%), or even closely-held businesses (11.6%). You’ll have to turn to Schedule D, “Capital Gains and Losses.” The average Fortunate 400 filer reported $192 million in gains. This suggests our typical tippy-top earner makes it by selling a business they spent a lifetime growing. As it turns out, 3,262 of the 4,584 Fortunate 400 who have appeared on the list in the last 23 years have made it just once, which reinforces this point.

The numbers going out are just as impressive, too. The group averaged $37 million in charitable contributions (6.9% of the country’s total), $22 million in state and local taxes, $5 million in interest, and $11 million in miscellaneous itemized deductions. Sadly, the report doesn’t tell us how much they spent on million-dollar watches, diamond-studded dog collars, and other essentials of overfunded lives.

As for taxes, the group’s average IRS contribution was $73.5 million, which represents a 23.13% rate. Of course, those are just averages — the study revealed that nine of our super-earners paid less than 10% and 26 more paid less than 15%. (It’s probably a good thing their neighbors don’t know who they are!)

It’s all an early Christmas for data nerds. Now here’s the bad news. This year we’ll be waving goodbye to our lucky 400 winners. Because of our growing population, the IRS will shift their focus to the country’s top 0.001% of taxpayers, or 1,396 returns. “This is a more analytically useful tabulation compared to the top 400 tabulation in that it provides a longitudinally consistent data point relative to the entire percentile distribution,” they say. (We told you this was data nerd stuff.)

Here’s one last thing the Fortunate 400 have in common. They don’t just take a shoebox full of receipts to their accountant on April 14 and say, “What do I owe?” No, these very smart people plan and plan and plan — to ensure they keep every last penny possible. It works for them, and it can work for you. So call us to take advantage of opportunities still remaining in 2016, and let’s see what we can do for you!

← Over the River and Through the Woods Sweet Taxes! →