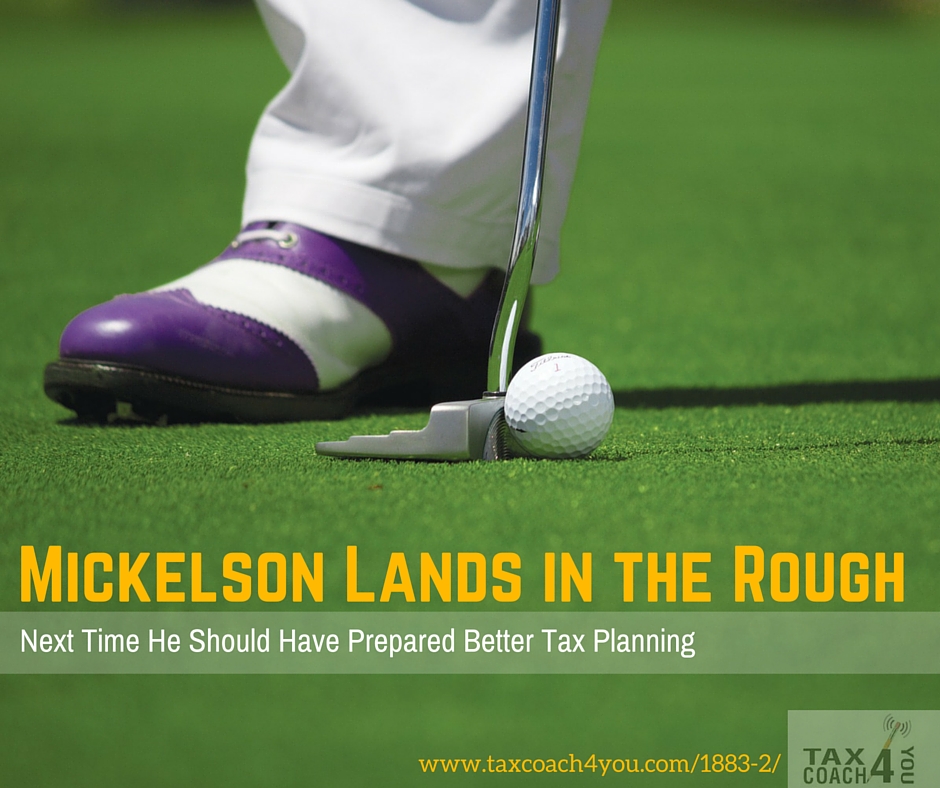 Spring is here, and golfers across the country are busting out their loudest pants to hit the links. Tiger Woods is taking a break from chasing pancake-house waitresses to shank wedges into water hazards. And Phil Mickelson, everyone’s favorite lefty champ, is struggling with a different sort of hazard right now . . . specifically, legal problems over a hole-in-one he shot on Wall Street four years ago. It could have been avoided with better tax planning.

Phil’s a successful guy by most measures. Forbes magazine ranks him #8 in their latest list of highest-earning athletes. They estimate he took home $51 million last year, including $2.8 million in tournament winnings and an enviable $48 million more in endorsements.

But he seems to have a harder time managing his money than most $51-million-a-year guys. He’s complained that taxes slice 62% off his income, which makes ends harder to meet. He’s even said he passed on buying a piece of his hometown San Diego Padres due to high state taxes.

Mickelson also seems to have an appetite for gambling. But sometimes luck works in his favor. Back in 2012, he found himself in hock to a big-time sports better named Billy Walters. At one point, Walters hinted it might be a good time to invest in Dean Foods. Mickelson sank $2.4 million into the stock. A week later, it spiked 40% on positive earnings news. The very next day, Mickelson sold for a $932,000 gain and paid his debt to Walters.

Last week we discovered how Mickelson teed up such a lucky shot: the government announced insider trading and securities fraud charges against Walters and former Dean Foods chair Thomas Davis. Walters, who allegedly used insider tips to enrich himself by $40 million, says he looks forward to defending himself in court. He’ll start out from a poor lie, though — Davis has already pled guilty to 12 counts, and even confessed to throwing a “burner” cellphone he got from Walters into a creek after FBI agents visited his home.

Mickelson was named as a “relief defendant,” which means he’s not actually charged with a crime. (If you’ve got to be a “defendant,” that sure sounds like the way to go.) So he’s not headed to rich-guy jail like his pal Walters and Davis appear to be. But he does have to give back the $932,000. And that raises an interesting tax question. He paid the tax on the gain when he made it — so does he get it back now that it’s gone?

You might think he could just take a mulligan and amend his 2012 return. But that’s not how taxes work — every year stands on its own.

Yes, he can take a capital loss for the repayment in 2016. But unless he has an equivalent amount in gains to report, that may not give him the full benefit of the deduction this year.

His best option may be Code Section 1341, which may let him calculate the tax he paid on the gain in 2012 and essentially take it as a credit against this year’s bill, without actually “deducting” it in 2016.

In short, careful planning should help Mickelson turn his tax bogey back into a par. And it can do the same thing for you, even if you’re not facing six-figure purses and seven-figure endorsements. Remember that the next time you get a hot stock tip, call us first!