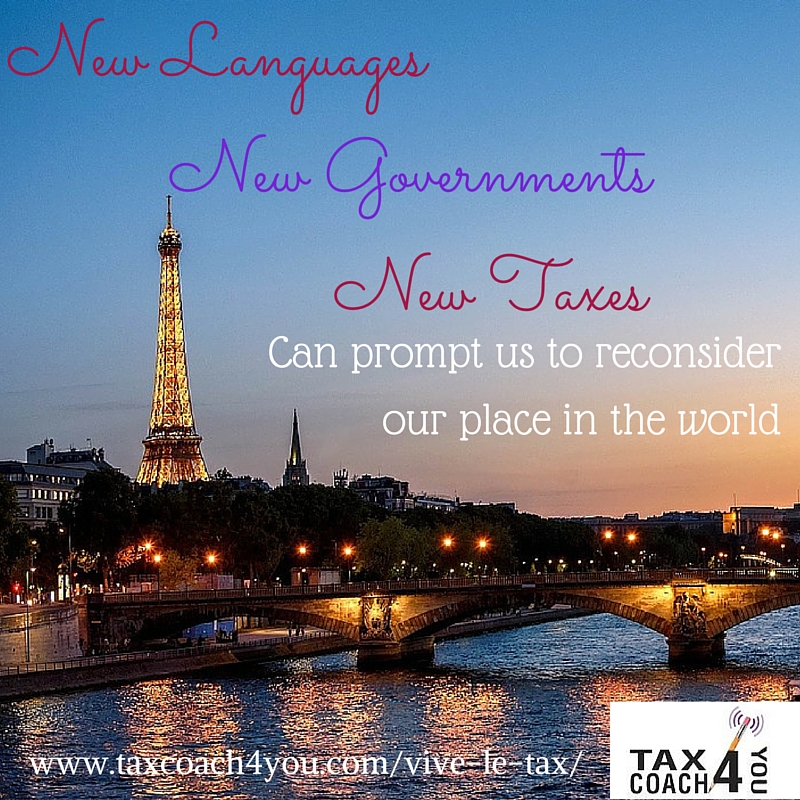 This year, as usual, millions of American tourists took advantage of summer vacation to travel abroad. Favorable exchange rates made European destinations especially attractive. Seeing Old World cultures gives us perspective that we just can’t get when we load up the family truckster and head for Disney World. The sights, the sounds, and the great big smells we encounter abroad shed new light on our ordinary lives. New languages, new governments, and even new taxes can prompt us to reconsider our place in the world.

Take Paris, for example. France is the most popular tourist destination in the world, and the City of Light sees almost 2 million American visitors per year. So what sort of tax system do visitors to Paris encounter?

Income taxes are just the start. French taxpayers also shell out 7.5% for their version of Social Security, a 0.5% “social debt” tax, plus 3.4% in “additional sampling social contribution” and 1.1% in “solidarity labor” tax on investment income. And that’s all before they pay their local professional taxes, residence taxes, and land taxes!

That may sound like a lot. But French employers have even more to grumble about. Employers pay 13.1% of their employees’ wages for medical and disability programs, 5.4% for parenting benefits, 4% for unemployment programs, and at least 18.2% for retirement benefits. Granted, that first 13.1% replaces much of what American employers pay for health and disability insurance. But you can certainly see why the Parisians think twice before deciding to hire someone new. Oh, and don’t forget the 33.1% corporate income tax!

No visit to Paris would be complete without a pain au chocolat at a sidewalk cafe or a late-night degustation of foie gras, escargot, and cheese. The good news is, the price you see on the menu is the price you actually pay. Value-added taxes (which take the place of our sales taxes) and even service charges are included in the marked price. It’s customary to leave a small amount of cash (5% or so) as a tip. But it’s reassuring to know that when the snooty waiter brings you l’addition and sneers at your American Express card, you won’t have to calculate the usual 15-20% that we tack on here. (Go ahead, have an extra macaron, they’re delicious!)

We’re not done yet. France levies an impôt de solidarité sur la fortune (wealth tax), starting at 0.55% on net worth over €790,000 and rising to 1.80% on fortunes over €16,540,000. The wealth tax only raises about two percent of the country’s revenue, but it’s quite controversial — some consider it a symbol of worker solidarity, while others object that it encourages the wealthy to leave the country. Last but not least, droits de succession et de donation (gift and estate taxes) climb as high as 60%, with no unlimited marital exclusion like we enjoy here in the U.S.

Here in the states, we complain that our taxes are too high. But a quick look at the French tax system reveals that liberté, égalité and fraternité don’t come cheap, either! Fortunately, our tax code is stuffed like a crepe with all sorts of deductions, credits, loopholes, and strategies to cut your bill. So call us when you’re ready to pay less, and see how much more you can put towards your dream vacation!