The Rich Are Different 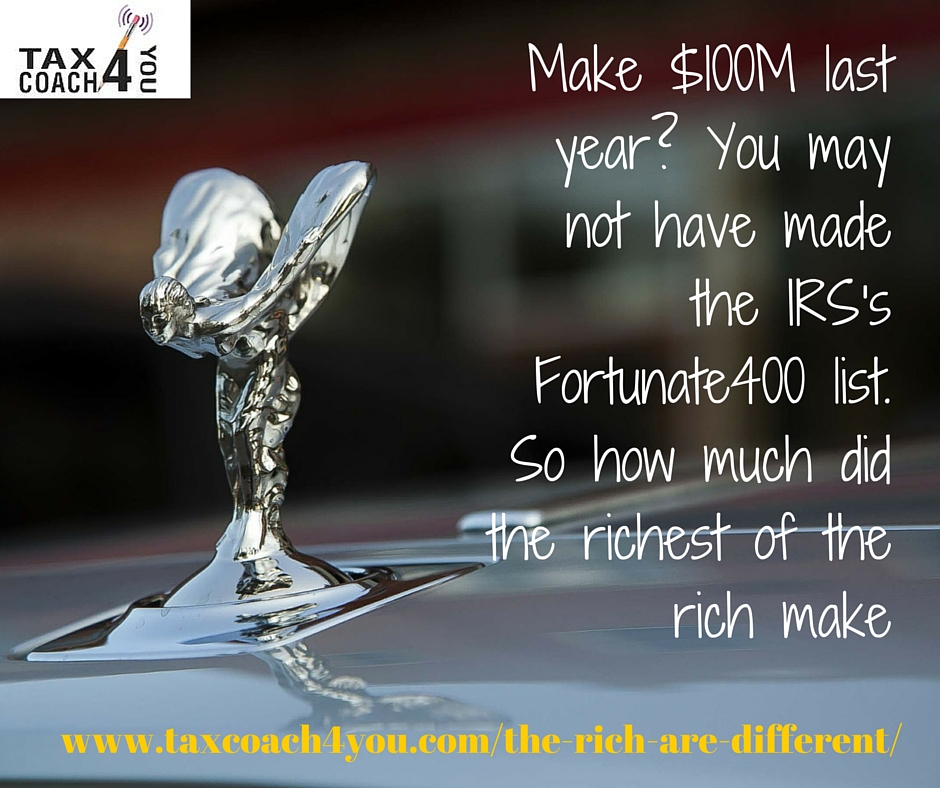 Back in the Gilded Age, an ambitious social climber and noted toady named Ward McAllister coined the phrase “the Four Hundred,” named for the number of people that Manhattan heiress Caroline Astor could fit in her Fifth Avenue ballroom. In 1982, Forbes magazine borrowed that same number for their annual “Forbes 400” list of the richest Americans. Ten years later, our friends at the IRS borrowed it again for their annual report on America’s top earners. And while the IRS doesn’t give us the names we really want (or tell us which ones are currently single), it’s an insightful look into some of the fattest wallets in the country.

As usual, wages and salaries made up a surprisingly small fraction of these incomes — just 8.45%. That means our average winner isn’t some corner-office executive raking in a nine-figure salary. Taxable interest made up 5.75% of the total, and taxable dividends another 10.78%. So we’re not talking idle heirs and heiresses clipping coupons, either. The real action comes on Schedule D, where our lucky winners report capital gains. The average “Fortunate 400” reported 51.69% of their income from capital gains, or $139 million each. (That’s way down from $191 million in 2012 — more on that little info-nugget in a bit.)

Brass tacks time: How much tax did our 400 supersized earners actually pay? For 2013, their average IRS bill was $60.8 million, or 22.9% of their income. That’s up considerably from just 16.7% in 2012. So why was 2013’s bill so much higher than 2012’s? Blame changes in the tax code, especially on capital gains. The 2013 “fiscal cliff” bill raised the top rate on most long-term gains from 15% to 20%. And the Affordable Care Act piled on an additional 3.8% “net investment income tax” on capital gains, interest, and dividends. Those changes encouraged sellers to unload assets in 2012 rather than wait for 2013’s higher rates. In some cases, corporate muckety-mucks (including Walmart founder Sam Walton’s heirs) accelerated dividend payments into 2012 as well.

The top 400 earners could see even more changes in capital gains taxes after this year’s sure-to-be-entertaining presidential election. Democratic candidates Hillary Clinton and Bernie Sanders have proposed raising rates on capital gains and investment income. On the Republican side, nearly all the candidates propose lowering those rates, while Marco Rubio has proposed exempting that income entirely.

4,474 taxpayers have joined the IRS top 400 over the last 22 years. 3,213 of them appeared just once, which reinforces the fact that most of those lucky winners make it by selling a business they spent a lifetime nurturing. (Really, isn’t one hundred-million-dollar year enough?) Just 129 taxpayers have appeared on the list 10 or more times, and you can imagine they all had pretty nice holiday seasons on their private islands somewhere warm.

What does all of this mean for you? It means that even for us ordinary mortals, tax planning really can make a difference, especially when it comes to cashing out your gains. And now is a great time to start. Why not resolve to make 2016 the year you finally take control of your tax bill, and call us for the plan you need!

← Cast Your Ballot The Lifetime Spend of a Client →