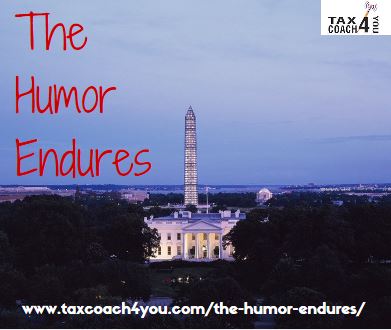 The passing of former First Lady Nancy Reagan last week at age 94 marks a bit of an end to the 1980s. Nancy earned both praise and criticism for restoring what she saw as some much-needed Kennedy-esque pomp and circumstance to the White House. Later, she earned praise for her work against drug use and, in later years, for championing embryonic stem-cell research. The passage of time proved kind to Mrs. Reagan — her funeral drew an A-list of politicians, Hollywood celebrities, and even former A-Team start “Mr. T,” whom Nancy befriended as part of her “Just Say No” campaign.

Ironically, given Nancy’s own penchant for glamour, her husband Ronald made much of his reputation through his folksy, homespun wit. And taxes were a prime target of his humor. So in honor of both Reagans, here are some of Ronald’s most famous quotes about taxes to enjoy as April 15 approaches. And just to make it interesting, we’ve thrown in a ringer. Can you spot the words that actually came from Russian president Vladimir Putin?

“The taxpayer — that’s someone who works for the federal government but doesn’t have to take a civil service exam.”

“The government’s view of the economy can be summed up in a few short phrases. If it moves, tax it. If it keeps moving, regulate it. And if it stops moving, subsidize it.”

“There were always those who told us that taxes couldn’t be cut until spending was reduced. Well, you know, we can lecture our children about extravagance until we run out of voice and breath. Or we can cure their extravagance by simply reducing their allowance.”

“History shows that when the taxes of a nation approach about 20% of the people’s income, there begins to be a lack of respect for government . . . . When it reaches 25%, there comes an increase in lawlessness.”

“The tax agencies have no right to terrorize business . . . “

If there’s anything Ronald Reagan hated more than taxes, it was the “evil empire” of the former Soviet Union. That’s why it’s especially ironic that the last quote about tax collectors terrorizing business came from Russian strongman and former KGB apparatchik Vladimir Putin!

Presidents and their spouses will always come and go. (Someday, Americans will mourn the passing of the first “First Gentleman.”) But some things won’t ever change, and we’re confident it won’t ever be easy to pay taxes. Want to make things easier? Come to us for a plan to pay as little as possible! Every day you wait is a day you might be able to pay less.