A Tax in a Pineapple Under the Sea 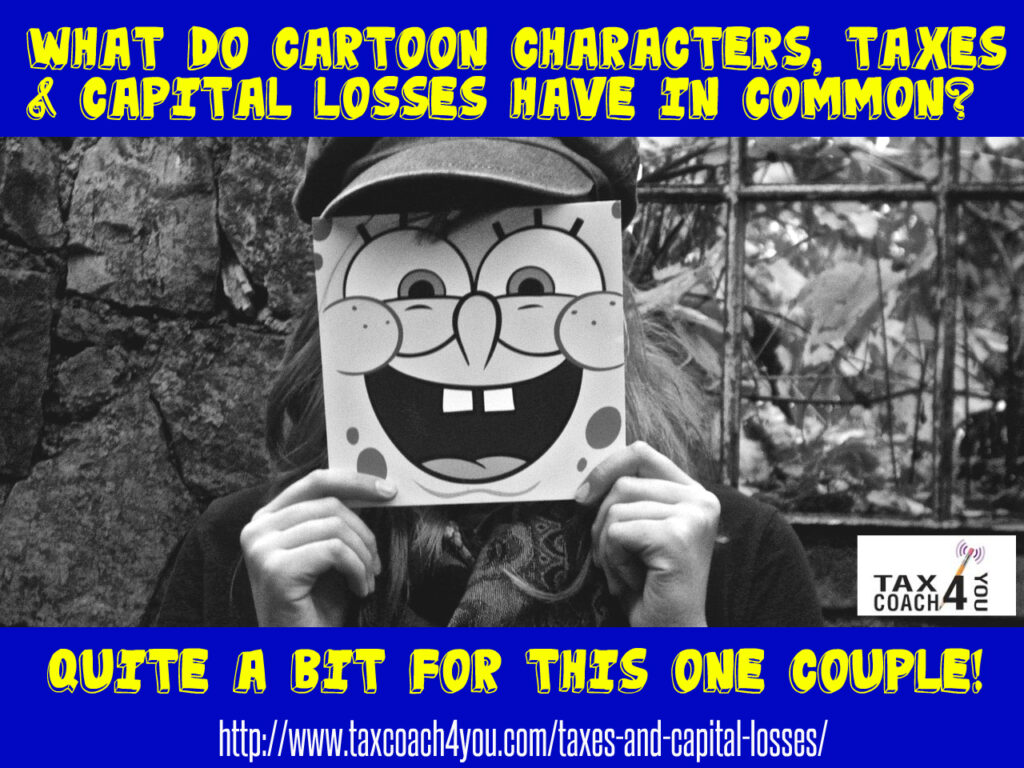 You know what’s even worse than paying tax on money you make? Try taking a loss on money you lose. Make $100, pay a 40% tax, and you’ve still got $60 left. But lose $100, take a tax loss, and you’re still out your $100. Yeah, you can deduct it against future income. But it’s kind of like those “mail-in” rebates you get when you walk out of Staples with a new printer. It sounds good when you’re still in the store. But in the back of your mind, you realize you’ll probably never actually mail it in.

SpongeBob SquarePants is a kids’ cartoon chronicling the adventures of a sponge named Bob, who lives with his pet snail Gary in a pineapple on the ocean floor. (If you’re a parent of a young child, you can just skip ahead to the next paragraph.) SpongeBob has become Nickleodeon’s most popular series, squeezing up a boatload of awards, and spawning two movies. In 2011, mycologists working in Malaysia even discovered a new species of fungus in the Bolotaceae family which they named spongiforma squarpantsii.

With a franchise that successful, every huckster within 20,000 leagues wants a SpongeBob tie-in to promote their business. One of those hucksters was a company called SpongeTech. Don’t let the “tech” fool you; these guys were in the decidedly low-tech business of selling soap-filled sponges, including a SpongeBob SquarePants model filled with baby soap. But their real business was soaking investors — and after all the hype was washed away, SpongeTech was just another penny-stock scam. Scratch that — as one reporter put it, “SpongeTech was no ordinary pump-and-dump penny-stock scheme; it was, to play on Churchill’s famous definition of Russia, a fraud wrapped in a stock-market rig inside a money-laundering conspiracy.”

Robert and Penny Greenberger were two of those unlucky investors who watched their “investment” in SpongeTech circle down the drain. By the time the company filed for bankruptcy, the Greenbergers had lost $569,220. In 2010, they wrote the capital loss off on their taxes. Which was fine, except for one thing. They can carry that loss forward to absorb future gains. But they can only deduct $3,000 per year against their ordinary income. At that rate, they’ll still be writing it off in the 23rd century.

But theft losses are deductible against ordinary income. Right now! So, in 2012, the Greenbergers amended their 2010 return to claim a theft loss, and asked the IRS to send them a refund for $177,102. The IRS said no, and everyone sailed off to court. Last month, Judge James Gwin ruled that, to prove theft, the Greenbergers had to show two things: 1) that SpongeTech’s “nauty” scammers acted specifically to take their money through fraud, and 2) that the Greenbergers had transferred their property to the thieves. Unfortunately for our losing investors, they had bought their stock on “the open market, without any knowledge of who was on the other side of the transaction.” And with that, he sank the Greenbergers’ case.

Remember when you were a kid and your mom told you not to buy something just because there was a cartoon character on it? She was right, and she would tell you the same thing about your portfolio. The most important lesson here may be to make the right financial decision first, then find the most tax-efficient way to do it. So call us for help — we’re here to help you clean up your messiest financial mistakes!

← Stop Overpaying Your Taxes - Social Media Business Hour What Is Your CPA Not Telling You? The Hartman Media Company →