Tax Advice for the Grinch 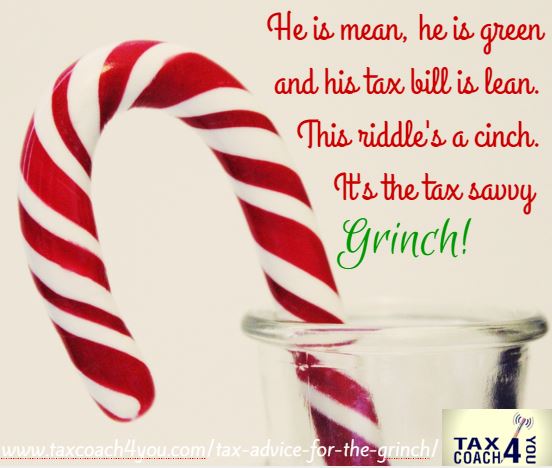 The holiday season is in full swing, and we expect you’re on your best behavior to make Santa’s nice list. But there’s one famous guy who works harder than anyone else to be naughty this time of year, and that’s everyone’s favorite Dr. Seuss anti-hero, the Grinch.

We don’t care if you prefer the original animated cartoon or Jim Carrey’s 2000 live-action remake. Either way, when you think of the Grinch, you probably think about what he steals. But have you ever thought about what he pays? You can be sure the Whos down at the IRS do! Fortunately, the Grinch can take advantage of all sorts of tax deductions to help pull off his Grinchy plot. Those include:
•     Mileage. The Grinch can choose to deduct “actual expenses” (maintenance, upkeep and depreciation on his ramshackle sleigh) or the standard allowance (currently 57.5 cents per mile). In the Grinch’s case, the short trip down from the top of Mount Crumpet to Whoville makes actual expenses his best bet.
•     Uniforms and Work Clothes. Uniforms the Grinch provides for himself are deductible so long as they’re not “suitable for ordinary street wear.” This time of year it seems like everyone enjoys a red coat and hat. Still, we think the Grinch’s fake-Santy Claus look should be distinctive enough to pass the IRS test.
•     Meals and Entertainment. Feeding all those Whos at the end of a long day can’t be cheap, even if you opt to save a little by carving the roast beast yourself. The Grinch can deduct 50% of all meals and entertainment he hosts, down to the last can of Who Hash. That’s exactly the sort of subsidy that helps the Whos feast, feast, feast, feast.
•     Contractor Fees It’s clear that the Grinch’s dog Max would prefer to just go along for the ride. But that’s no reason not to deduct any payment the Grinch makes to his four-legged friend. Max isn’t regularly engaged in the trade or business of helping the Grinch steal Christmas, which suggests the IRS would classify Max as an independent contractor (rather than an employee), responsible for his own employment tax and withholding. (Getting off that particular hook is sure to bring out that evil Grinch smile!)
•     Medical and Dental. Speaking of the Grinch’s smile, have you noticed how awful the Grinch’s teeth are? With just a little planning, he could set up a Medical Expense Reimbursement Plan and deduct the cost of straightening and whitening those choppers!

Here’s another reason for the Grinch to be happy that his heart grew three sizes that day — and he gave Christmas back. If he really had stolen Christmas, he would have owed tax on it! Ill-gotten gains are just as taxable as any other kind of income, right? We imagine all those flu floopers and tar tinklers would be treated as ordinary income — but who knows how an auditor would treat a set of silver jing tinglers, or a rare zu zitter carzay?

This holiday season, we wish you and your family all the best. And remember, don’t hesitate to call us with any year-end finance questions!

← Sharing My Tax Expertise How To Avoid Overpaying Taxes →