No, They Don’t Want Justin Bieber Back 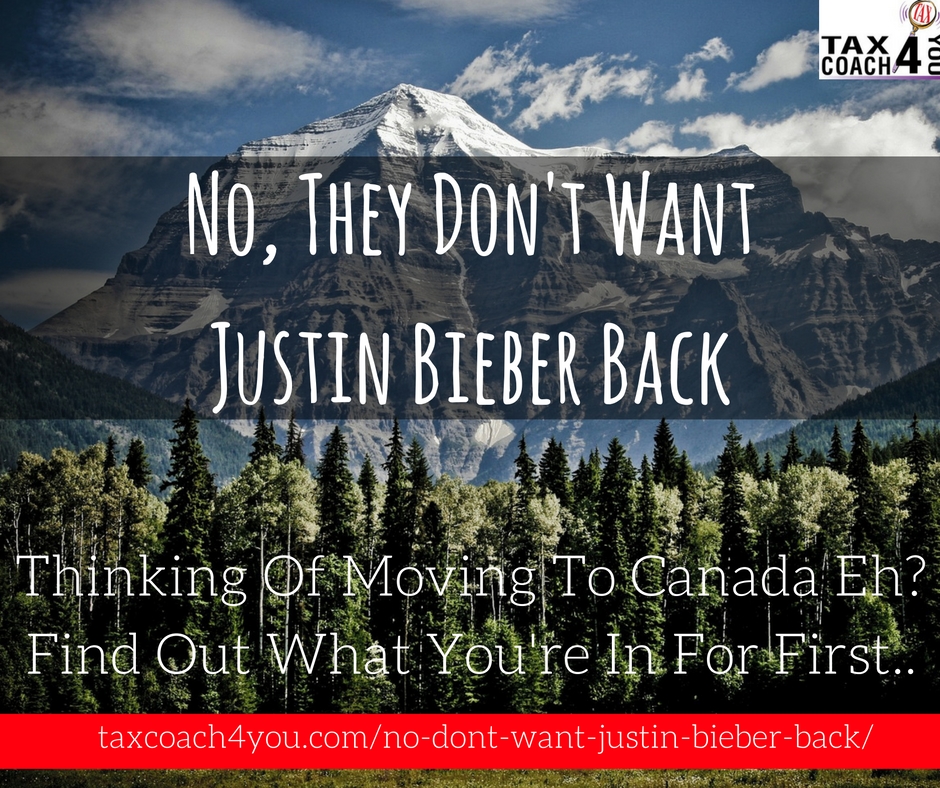 Given how long the 2016 presidential election season was, you’re probably in one of two camps right now: ready to move to Canada, or relieved you don’t have to. Either way, it’s likely more Americans have actually thought about Canada in the last year than in the entire last century. So let’s take a look at how Canada’s tax system works, eh? Here’s what you’re in for (or what you’re missing) from a country that calls its money the “loonie.”IRS

At first glance, Canada’s tax system looks a lot like ours. The Canada Revenue Agency is the Great White Northern equivalent of our IRS, and it collects income and payroll taxes. “Revenue Canada” also collects the Goods and Services Tax (a 5% value-added tax) and Harmonized Sales Tax, a combined federal/provincial sales tax that replaces the GST in five eastern provinces. Tempted to cheat? Just remember they’ve got the Mounties on their side!IRS

Canada’s federal income tax looks a lot like ours, too, only nicer. Rates start at 15% and top out at 33% on incomes over $200,000. (Right now, one dollar equals about 1.34 loonies.) Capital gains are taxable; however, you’ll only include 50% of them in your income. You can defer up to 18% of your previous year’s income, up to about $25,000, into a Registered Retirement Savings Account that resembles our 401(k)s. You can also put up to $5,500 per year into a Tax-Free Savings Account that resembles our Roth IRAs. IRS

The big difference comes in the provinces and territories. Here in the US, state tax rates rarely climb above 8%. California has the top rate at 13.3% and it doesn’t apply until $1 million. Canada’s provincial rates generally start around 8% and climb quickly from there. Quebec has the top rate at 25.75%, and it kicks in at just $103,151. (But it sounds so much better because it’s in French!)

Of course, Canadians get something for their provincial tax dollars that we don’t get from our states: Canada’s legendary healthcare system. Canucks love their healthcare almost as much as they love maple syrup. Doctors handle billing directly with the government for everything but prescription drugs, long-term care, eyeglasses, and dental care. It’s hardly perfect, of course — critics point to long wait times for specialists and Canadians traveling to the U.S. for elective surgeries. But in the end, Canadians drop just 9% of their GNP on healthcare, versus 17% here.

And Canada has the usual collection of oddball tax rules you’d expect in any democracy. Blank CDs carry a special “private copying levy” because the government assumes you’re using them to violate somebody’s copyright. Geese, ducks, and turkeys are tax-free if you’re going to breed them, but taxable if they’re on the menu. And just this year, Alberta boosted taxes on small breweries from 10 cents to $1.25 per liter, which drinkers are finding hard to swallow.

Canadians will roll out the welcome mat if you decide to pack up your skates and take off. If you’re single, visit MapleMatch.com, a dating site to match fleeing Americans with lovelorn Canadians. (Check the boxes for “bacon” and “hockey” to up your odds.) And don’t forget that Canada’s most recent election lasted just 78 days.

The new administration is sure to bring to change to Washington, and that probably includes changing tax laws. We’ll stay on top of it all to help you pay less. Maybe you’ll use some of the savings for a city weekend in Montreal, or a ski trip to Whistler? Bring us back some souvenirs, hoser!

← Six Figure Side Gig All You Need is Love →