Little Tax Lien on the Prairie 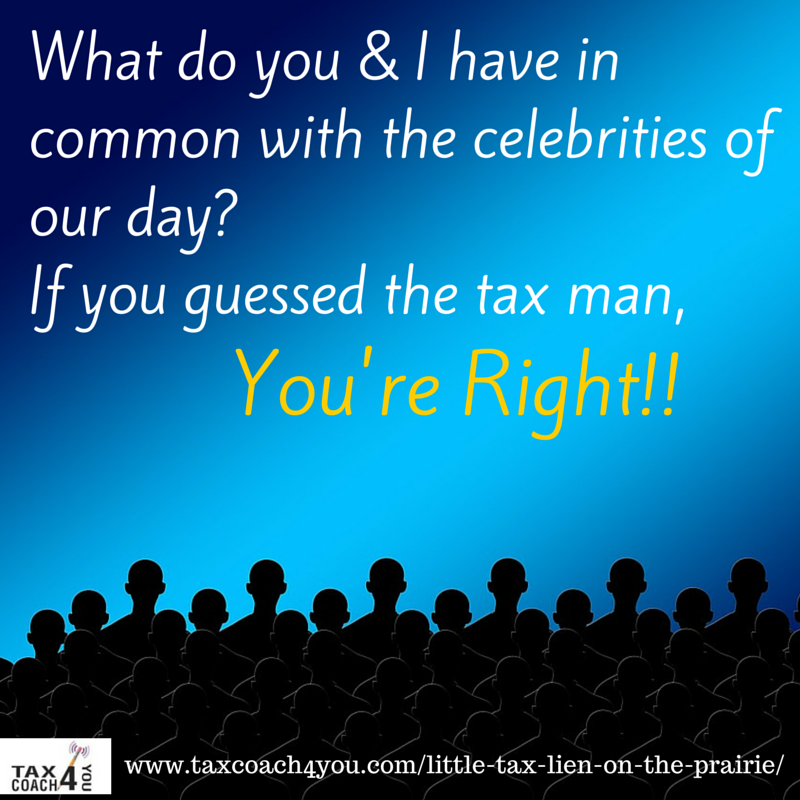 Us Weekly is one of those glossy tabloid magazines you see in the checkout line at your local supermarket. Every week, they run a photo feature called “Stars: They’re Just Like Us,” with revealing, slice-of-life gems such as a Bachelorette throwing a ball to her dog in the park, a former supermodel cheering at her kid’s soccer game, or Matt Damon adjusting his fly while he waits in line to renew his driver’s license. (We’re explaining this because we know you would never read anything so frivolous).

Here’s another way that stars are just like us . . . they deal with the tax man! (Except when they don’t, as the case sometimes may be). Granted, it’s not great television, watching the Kardashians pay their quarterly estimates. Still, taxes are just a much a bane of their existence as they are of yours. So let’s take a look at some celebrity tax stories making the rounds:
•Melissa Gilbert, who starred as Laura Ingalls in the family drama Little House on the Prairie, is facing a $360,000 lien for unpaid federal income taxes. While we can’t be privy to the exact circumstances, the actress, who has since served as President of the Screen Actors Guild, reports that the recession had hit her hard. “That, plus a divorce and a dearth of acting opportunities the last few years, created a perfect storm of financial difficulty for me.” Gilbert, her husband, and their two boys currently live in a log house in Michigan, which she refers to as “our own Little House in the Big Woods,” and says she has negotiated a plan with the IRS to make good on her debt.
•Presidential candidate Carly Fiorina may be barely cracking 1% in the polls, but she’s jumped to an early lead in the financial disclosure race — she won’t be accused of hiding anything in her tax returns. The former Hewlett-Packard CEO had already released her federal returns, along with a 503-page financial disclosure pegging her net worth at $58,954,494.88 (because $60 million would just be vulgar). But last week, she opened up her state tax returns as well. While Fiorina lives in Virginia, her various business and investment interests force her to file tax returns in a total of 17 states. We’re not talking a lot of money here — for example, she earned $946 in investment income attributable to Michigan, which meant filing a 58-page return and paying $40 in tax (which Virginia credited back to her on their return). The end result with her state tax returns is a 1,000-page stack of paper that ought to keep her former company ‘s printers humming profitably for years.
•Former House Speaker Dennis Hastert is in hot water following revelations that he paid $1.7 million in hush money to conceal “former misconduct.” Prosecutors have indicted him for failing to report cash transactions and lying to the FBI. It’s been an incredible fall for Hastert: a decade ago, he was two heartbeats away from the Presidency, and now his life is an episode of the Maury Povich show. But will the IRS have a problem with it? Almost certainly not! In fact, Hastert can plausibly claim a theft loss deduction for payments exceeding 10% of his adjusted gross income. The indictment doesn’t tell us if Hastert’s blackmailer reported the payments as income, and we can safely assume Hastert didn’t issue a 1099! Still, this is one case where the IRS might actually make a celebrity’s troubles easier.

Celebrities are famed for supporting entourages of publicists, agents, and managers that you probably don’t need and can’t get. But they also have tax planners — and you can have one of those right now. Just call us for the plan you need to keep your taxes to a legal minimum and out of the headlines.

← Pomp and Circumstance What Goes Around Comes Around →