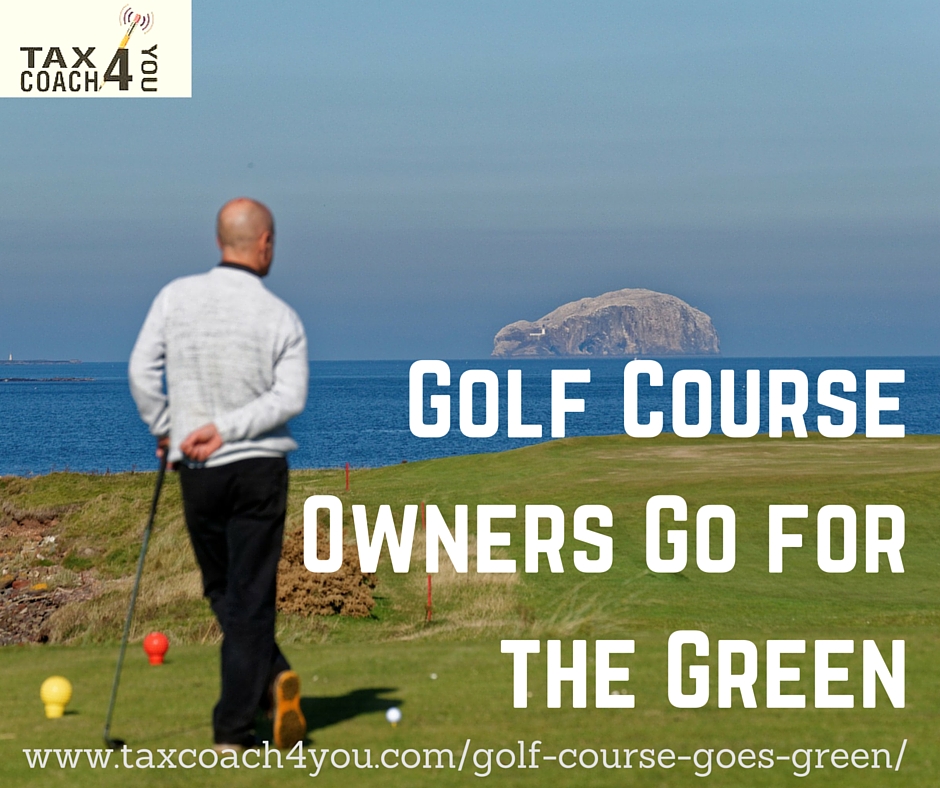 Golf courses may be some of the most beautiful manmade environments on earth. Millions of Americans actually hate the game itself, but tolerate topping their drives, shanking their wedges, and losing $2 Nassau bets by missing three-foot putts just because they get to do it all on a golf course. But while most of us can appreciate the serene beauty of the links, that lush green doesn’t always translate into financial gold. (As Rodney Dangerfield told us in Caddyshack, golf courses and cemeteries are the two biggest wastes of prime real estate.)

A “conservation easement” is a gift of a partial interest in real estate to a publicly-supported charity or government. If you own a historic building, for example, you might donate the right to make changes to the facade, to keep its historic character. If you own a farm at the edge of town, you might donate development rights to keep the space green. In 2012, 1,114 taxpayers claimed conservation easement deductions. That might not sound like a lot, but the average amount claimed was $872,250. So we’re talking real money here — and the IRS is paying attention and cracking down on inflated appraisals.

Golf course owners love to save some green as much the next guy, so of course they’ve worked to hop on the conservation easement bandwagon. In 2009, the owners of Kiva Dunes, on Alabama’s Gulf Coast, won a Tax Court case letting them deduct $28.7 million for limiting their property’s use to a golf course, park, or farm. In that dispute, the Court took the “conservation” aspects for granted, and focused solely on the value of that gift. But sometimes the Court takes a closer look at the validity of the gift itself — which brings us to this week’s story.

Back in 2003 and 2005, the operators of St. James Plantation, a pair of North Carolina courses, deducted nearly $7.9 million for easements on their properties, located in exclusive gated communities. They claimed the gifts would help preserve fish, wildlife, plants, and the overall ecosystems of the properties, located in the Cape Fear Arch “biodiversity hotspot” and the Boiling Springs Lake Wetland Complex. Both properties provide travel corridors for the Red-Cockaded Woodpecker (although there have been no reports of actual sightings of the elusive bird), and the 2005 easement area houses the “significantly rare” Eastern Fox Squirrel.

But (and there’s alway a “but,” or there wouldn’t be much of story), the easements also let the owners keep operating their golf courses. That means digging sand traps, maintaining cart paths, removing trees, and building rain shelters, restrooms, and food concession stands. It also means assaulting the turf to within an inch of its life with herbicides, fungicides, insecticides, and other chemicals, “in such manner as the owner deems appropriate” as long as they follow “the best environmental practices then prevailing in the golf industry.” And of course the courses are surrounded by the usual instant mansions that developers love to crank out wherever they can drive up prices for fairway views.

The IRS teed off on the operators’ deduction, which set up a playoff in Tax Court. Last month, it came to the fore when Judge Thomas Wells issued a 60-page opinion ruling that the properties didn’t qualify as “significantly relatively natural habitat.” That means, unfortunately for our golf course operators, their greens aren’t green enough. The Judge’s ruling is also likely to mean bad news for other golf courses waiting for rulings on their proposed deductions.

Smart tax planning may not necessarily score a hole in one. But it’s still your best bet to stop giving the IRS too much of your hard-earned green. So call us for the plan you need, and see if we can put your next golf vacation on the IRS!

← The Lifetime Spend of a Client Are You Missing Out On Tax Relief? →