Don’t Bogart That Deduction, My Friend 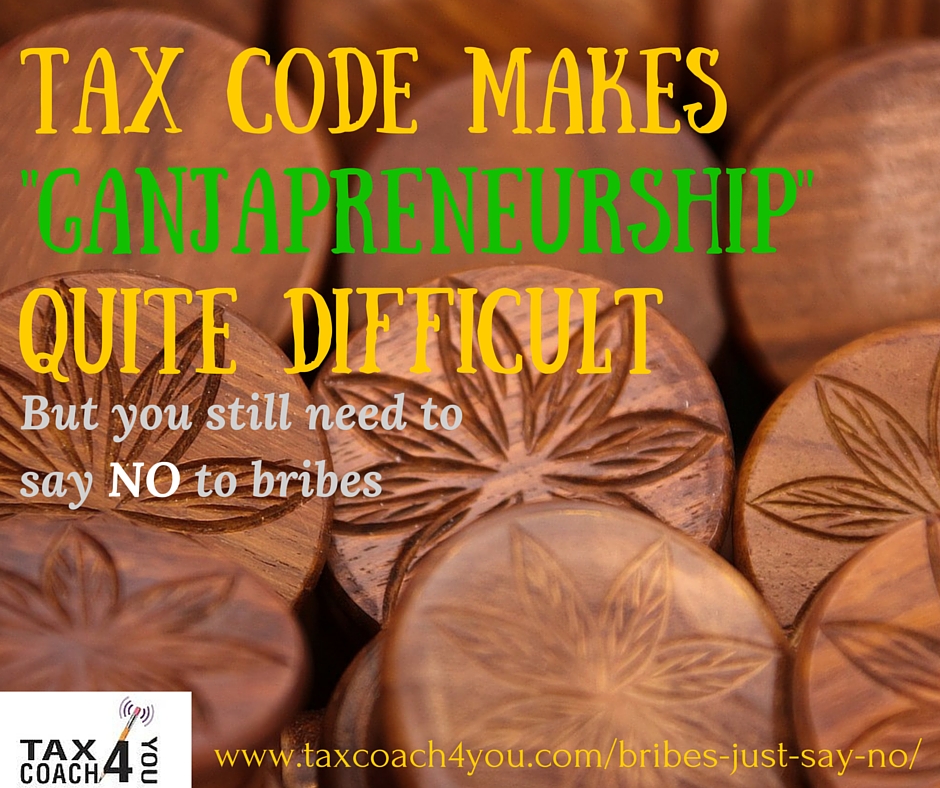 Imagine you’re a hardworking pot dealer just trying to operate an honest shop in the newly legal marijuana industry. You get audited, and the examiner hits you with a $290,000 bill. He then asks to talk “off the record,” and tells you he was lenient with your examination. The real bill, he says, should have been a million dollars higher. Then he looks you in the eye and says, “Hey . . . how about a little something, you know, for the effort?”

That’s pretty much what happened to one marijuana dispensary owner in Seattle. Except the auditor’s dopey request didn’t quite work out the way he hoped. (And really, if it had, would you be reading about it here?)

You may think that running a legal marijuana dispensary is 4:20 all day long, but it’s no ordinary business challenge. Polls show that a majority of Americans think it’s high time for legalization, yet there’s still a stigma attached. Banks and other financial institutions are reluctant to deal with the industry, which forces most vendors to do business in cash.

If those challenges aren’t enough, the tax code makes “ganjapreneurship” even harder. Section 280E says you can’t deduct any expenses for trafficking in controlled substances. Marijuana sellers can deduct their “cost of goods sold.” But there are none of the usual deductions for overhead expenses like rent, salaries, utilities, and professional fees that any other business can write off. That’s why tax advisors generally recommend that dispensaries sell as much other stuff, like apparel and accessories, as they possibly can. That way, they can allocate at least part of those overhead expenses to deductible purposes.

Now back to our Seattle story, already in progress. Paul Hurley is was an auditor working in the Seattle IRS office. But he wanted to “roll his own bonus” so he could pay down student loans. That’s when he went off the record with our pot shop owner and complained about living paycheck-to-paycheck. The shop owner sensed that Hurley was looking for a bribe, held up his hand to rub his fingers together, and looked dubiously at Hurley to see if that was the case. Hurley replied with a simple “20,” then specified that he wanted it in cash.

The shop owner agreed to meet the auditor at a local Starbucks. (Where else do you go to collect a bribe in Seattle?) But here’s where Hurley’s fortunes went up in smoke. The shop owner had called the FBI. Special agents gave him cash to pay the bribe, wired him for sound, and set up cameras outside the shop. They recorded the first meeting, on September 16, when the shop owner gave Hurley $5,000. They recorded a second meeting, on September 21, when he paid the remaining $15,000 and put a lid on Hurley’s fate. The FBI then swooped in and arrested him “without incident.”

Not surprisingly, Hurley is looking at 15 years in the joint. (Sometimes the jokes just write themselves.) That’s on top of a $250,000 fine, which makes the $20,000 request look like seeds and stems.

Of course, the real moral here isn’t to “just say no” when the IRS asks for a bribe, it’s to avoid getting into that situation in the first place! Our honest dealer really did owe a bale of extra tax, because he didn’t have the right plan. So don’t get busted like he did — call us today for your plan!