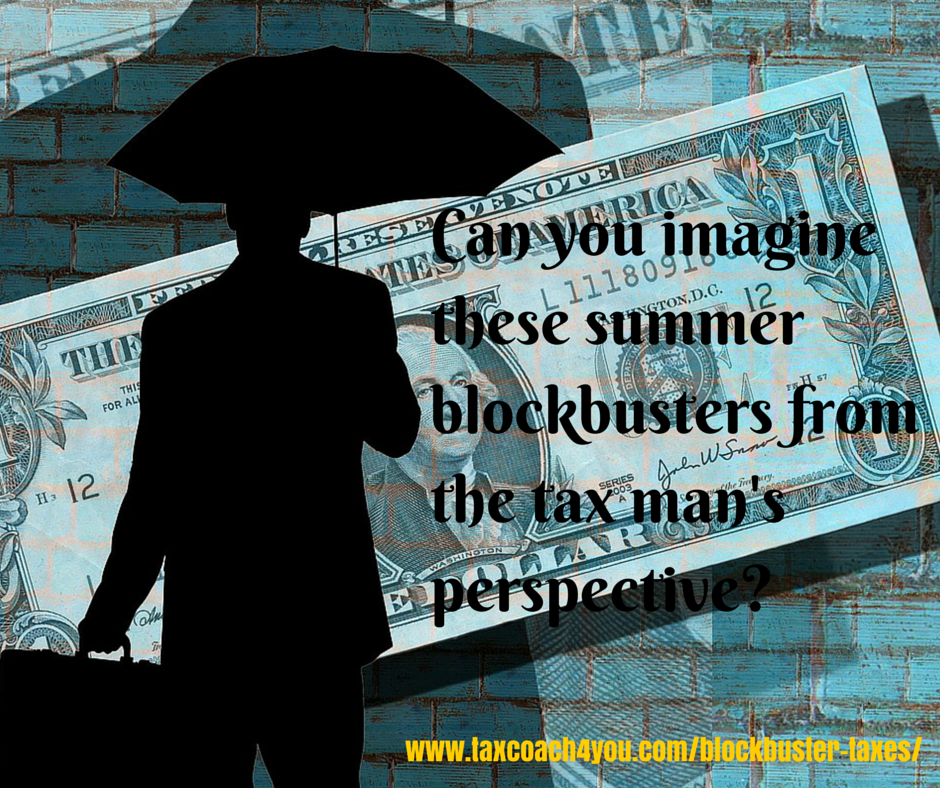 Memorial Day came early this year, and that means we get more time with our summer whites! (Of course, summer doesn’t “officially” start until June 21, but who’s counting?) For millions of Americans, cooling off at the movies with a bucket of popcorn and gallon of soda is a favorite part of the season. So we wondered . . . what would all that carnage look like from a tax perspective?

San Andreas: “The Big One” finally hits California, and helicopter rescue pilot Dwayne “The Rock” Johnson melodramatically sets off to save his estranged daughter. Meanwhile, up and down the California coast, accountants stay busy rescuing clients with casualty loss deductions.

Hot Pursuit: Reese Witherspoon plays an uptight policewoman protecting a druglord’s widow as the pair flees crooked cops and murderous gunmen in Texas. (When are the gunmen in movies ever not murderous?) Proceeds from drug trafficking are taxable, of course — we all know who finally got Al Capone. Sadly for our widow, Section 280E of the tax code prohibits deductions for any trade or business that “consist of trafficking in controlled substances.” Guess she should have thought of that before she became a druglord’s widow!

Inside Out: Pixar’s newest computer-animated sure-to-be-hit is set inside the head of 11-year-old Riley, as five emotions guide her life: Joy (Amy Poehler), Disgust (Mindy Kaling), Fear (Bill Hader), Sadness (Phyllis Smith), and Anger (Lewis Black). Well, someday, Riley is going to earn her first paycheck, come home, and ask Mom, “What’s FICA?” Which one of the five do you think is going to take over her mind then? It might just be all of them!

Mad Max: Fury Road: Max and his fellow rebel Furiosa race a cross a post-apocalyptic Australian “Wasteland” in search of gasoline, explosions, random violence and other essentials of life. Tax collectors weep as not a dime of tax gets paid into the Highway Trust Fund. Of course, there may not even be a Highway Trust Fund in Australia . . . . hey, wait a minute, there won’t even be any tax collectors after the apocalypse!

The Avengers: Age of Ultron An all-star team of superheroes including Iron Man, Captain America, Thor, the Hulk, Hawkeye, and the Black Widow team up to save the world from the creepy Ultron. No tax “hook” here in the movie, but if star Robert Downey Jr. cashes another $50 million paycheck like he did after Iron Man 3, he’ll be Man of the Year at the IRS.

Terminator: Genesys: Arnold Schwarzenegger returns for a fourth go-round since his time-traveling robot debuted back in 1984. The new movie alters events from the first set of films in an alternate timeline, whatever that means. Shouldn’t the Terminator be paying estate tax by now? And if he goes back in time, does he get a refund of whatever estate tax he already paid?

We realize that smart tax planning isn’t as exciting as defeating Ultron. It won’t save as much as one of Robert Downey’s paychecks. (At least it’s easier to understand than the mind of an 11-year-old girl!) But smart tax planning is the key to paying less. And it takes less time to call us than it does to sit through the previews at your local multiplex. So what are you waiting for?