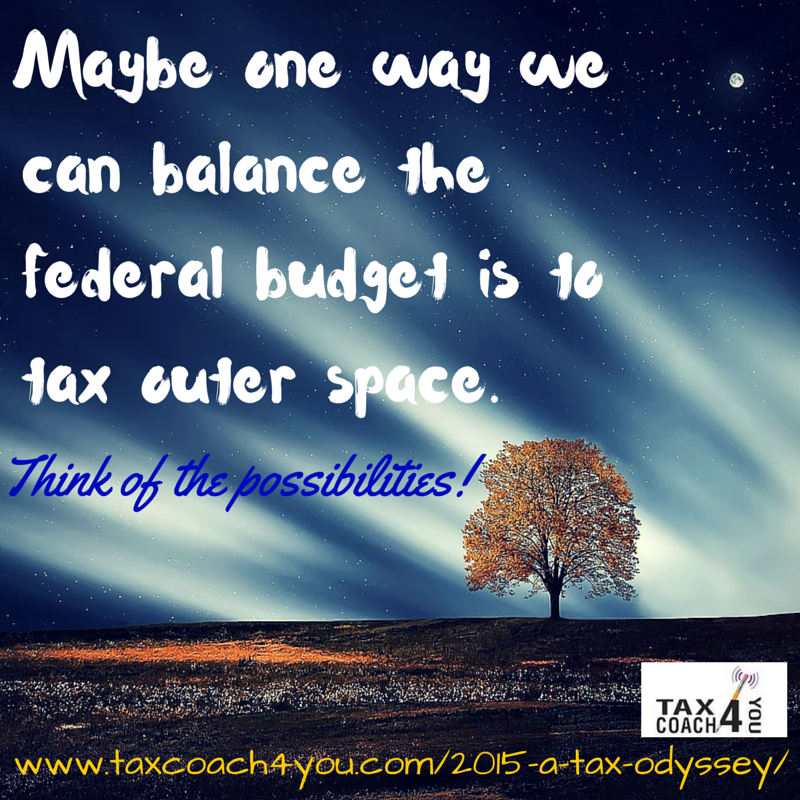 On July 23, NASA announced the discovery of Kepler-452b, the first potentially Earth-like planet within the “habitable zone” of a star like our Sun. Kepler-452b is 1,400 light-years away, meaning the New Horizons space probe that just passed Pluto should get there in another 26 million years. (Mom, are we there yet?) It’s 60% bigger than Earth, with a “better than even chance” of having a rocky composition, and takes 385 of our days to orbit its sun. Reporters instantly dubbed the planet “Earth 2.0,” and scientists from the Search for Extraterrestrial Intelligence Institute have already begun targeting it for signs of intelligent life.

Ironically, at the same time, officials in Washington are searching for signs of intelligence in the tax code. (So far, they’re not doing any better than the astronomers at NASA.) So we got to wondering . . . is there any way that our search for extraterrestrial life might help us out of our current budget jam? In plainer terms, can we tax it?

Let’s start closest to home. Our own astronauts are subject to U.S. tax on all of their worldwide income, regardless of where they live. (They get an automatic two-month extension to file if they’re outside the U.S. on April 15. We’d assume “off the planet” counts.) Astronauts pay regular tax on their salaries, which range from $64,724 to $141,715 per year. So, while our astronauts might escape earth’s gravity, there’s no escaping the IRS. On the brighter side, they also get a tax-free “dwarf” per diem for their time on the space station. (Seriously. Former astronaut Clayton Anderson reported he had $172 in his account after 152 days in the International Space Station.)

Further outside Earth’s orbit, asteroid mining might lead to some nice new tax gains. Our home planet is running out of key elements like phosphorus, antimony, zinc, tin, lead, silver, and gold. So companies like Planetary Resources are working to expand Earth’s dwindling resource base by mining asteroids. While their “cost of goods sold” will be higher than for comparable land-based minerals, the profit will be taxed as ordinary income at rates up to 35%. That’s a pretty sweet deal for the IRS, considering the asteroid miners just find this stuff drifting out in space.

The real tax jackpot comes when extraterrestrials join us here on Earth. U.S. resident aliens — presumably including space aliens — are generally taxed the same way as U.S. citizens, which means their worldwide income is subject to U.S. tax. While we don’t know anything about the economy on Kepler-452b, it’s safe to assume that a civilization advanced enough to travel 1,400 light years has created high amounts of material wealth — and as sure as the sun rises in the east, our federal, state, and local governments won’t hesitate to ask for their cut. (While we’re at it, when E.T. phones home, the telephone excise tax alone has to be pretty phenomenal.)

Finally, there’s one unsettling possibility we can’t ignore. What if we do find intelligent life somewhere out there, and they don’t like us? Famed physicist Stephen Hawking suggests we’re safer not waving too hard to attract alien attention, simply because if they can find us and reach us, they can probably destroy us, too. “If aliens ever visit us,” Hawking says, “I think the outcome would be much as when Christopher Columbus first landed in America, which didn’t turn out very well for the American Indians.” If that’s the case, the only tax worth collecting will be the estate tax — if there’s anyone left to collect it!

Our friends at the IRS may be yearning to boldly tax where no man has taxed before. But they can’t ever count on it, which means squeezing more and more revenue out of us here on Earth. The best way to beat them, without fleeing the planet, is a plan. So count on us to give you the “right stuff” — and remember, we’re here for your friends, family, and capsule-mates, too!

← Toxic Deductible Sludge Ready or Not, Here We Come! →