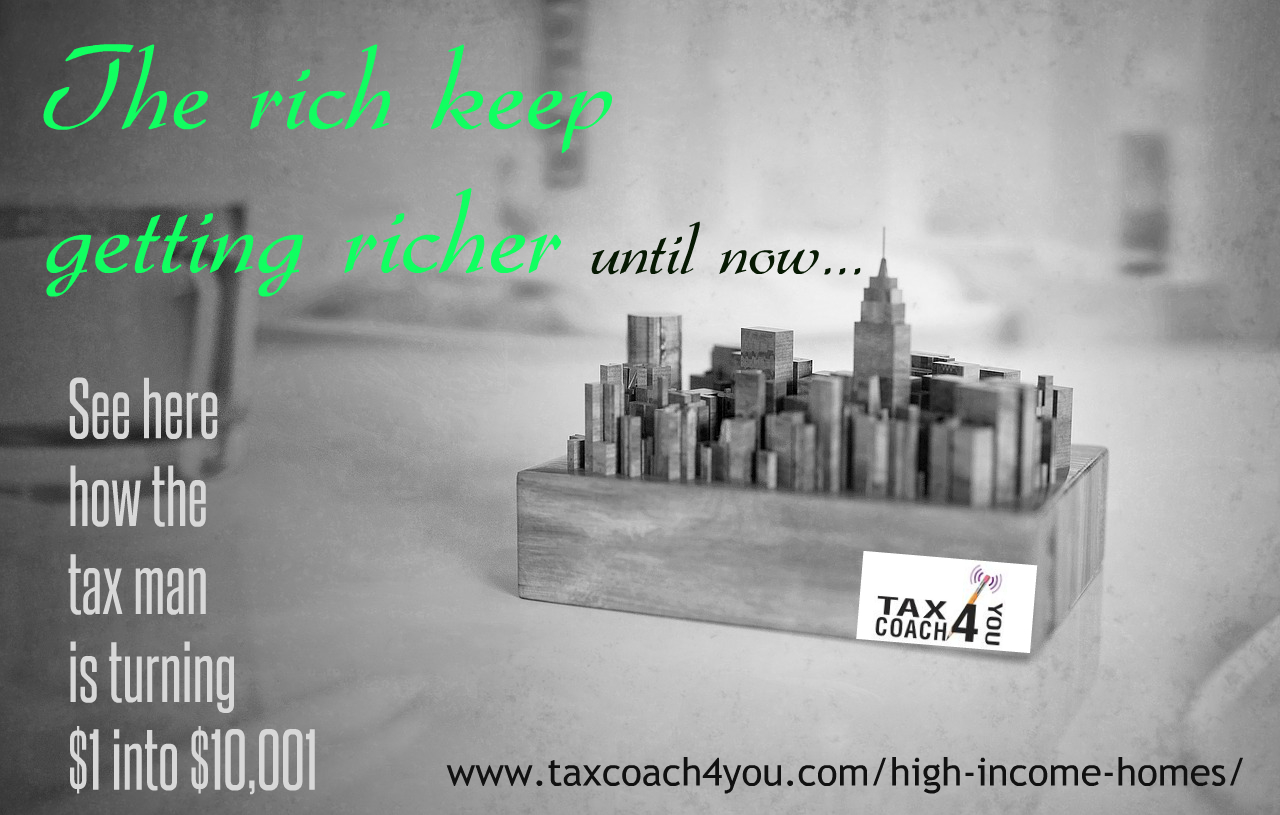 Here in the United States, Uncle Sam imposes a “progressive” income tax. As your income goes up, so does your tax rate. However, those rates go up incrementally. If you’re married, filing jointly with your spouse, the 39.6% top rate kicks in at $413,201. (We use the term “kicks” deliberately because that’s how it feels when you’re giving Uncle Sam nearly 40 cents on the dollar.)

The good news, if there really is any, is that the higher tax applies only on the amount of income above the new threshold. If your income is $413,201, you’ll pay the higher rate on that 413,201st dollar of income, but no higher on the first $413,200. Paying the higher tax on that last dollar hurts a little more, but not as much as if it meant paying more on every dollar.

But not all taxes are progressive in the same way. Sometimes governments impose taxes on certain transactions that kick in at a certain level but are based on the entire amount. Naturally, those sorts of taxes get buyers and sellers to sit up and take notice before they act. And we may be about to see that effect in one of the country’s frothiest housing markets — the “Big Apple.”

In 1989, New York Governor Mario Cuomo signed the “mansion tax” into law. It’s a flat 1% surcharge you pay to close on property costing $1 million or more. Last year, it raised $362 million. That’s a drop in the Empire State’s $72 billion bucket. But it’s a big deal for the buyers! If you pay “just” $999,999 for your new home, your mansion tax is zilch. But pay one dollar more, and you owe the tax on the entire $1 million. That single extra dollar of price just took $10,001 out of your pocket!

Back in 1989, $1 million really bought you a mansion. But today in Manhattan, the median sale price is a record-high $999,999, according to the Corcoran Group real estate brokers. You can drop $1 million just for a one-room studio. At the high end hedge fund manager Bill Ackman just paid $91.5 million for a condo at the One57 building in the heart of 57th Street’s new “Billionaire’s Row.” (He’s not actually going to live there, mind you — he’ll just host an occasional party and watch his equity climb ever higher.)

Drive two hours east to the Hamptons (or better yet, fly 45 minutes on a helicopter) and the story is much the same. A million bucks buys you something the real estate agent might describe as “shabby chic,” but that anyone without a vested interest in the sale price would just call “shabby.” You’ve really got to make it rain to get something most of us would consider a “mansion.”

Governments aren’t the only ones to hustle some extra cash cash when a property changes hands. Many of the city’s finer cooperative apartments impose a so-called “flip tax” to buy or sell. Want to join New York Jets owner Woody Johnson, fashion designer Vera Wang, and the rest of the billionaires hanging their bespoke hats at 740 Park Avenue? You’ll pay the building an extra 3%. That might not sound like so much — but considering the last apartment sold there went for $71 million (do the math), it adds up fast!

Here’s the lesson for the week. Buying big-ticket items like a house, an apartment, or business equipment can involve much more than just running down to the store and whipping out your American Express card. And selling those sorts of assets the wrong way can cost you even more. So don’t make those decisions alone. Call us for the plan you need to buy and sell right!