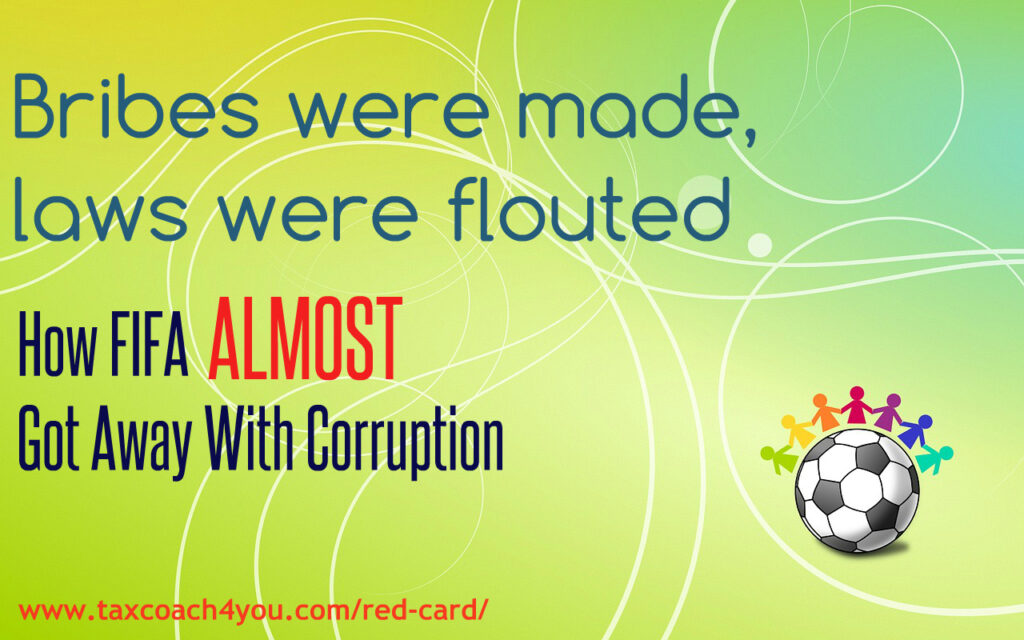 Picture a greedy cabal of shameless officials lording over a famously corrupt international cartel. Add suitcases full of cash bribes, and multimillion-dollar payoffs coursing through a shadowy network of shell companies and offshore accounts. Throw in a loud, colorful “mole” celebrating a life of private jets, Michelin-starred restaurants, and vintage wines. Now stir in an ongoing investigation, secret indictments, and a pre-dawn stakeout leading to a series of arrests at a luxury hotel in Zurich, Switzerland.

It sounds like the plot from the latest Jason Bourne movie, right? The only thing missing is the car chase. But it’s no big-screen thriller. It’s the real-life tale of 20 years of bribery and corruption inside FIFA, international soccer’s governing body. Last week, the Justice Department indicted 14 targets on 47 charges of racketeering, wire fraud, and money laundering. And would it surprise you to hear that the goalkeepers at the IRS helped blow the whistle on the fouls?

Chuck Blazer — the “mole” at the heart of the story — began his unlikely journey as a suburban “soccer dad” coaching his 6-year-old son outside New York city. He worked his way up through the soccer hierarchy to general secretary of the Confederation of North, Central American and Caribbean Association Football (CONCACAF), becoming the only American ever to serve on FIFA’s executive committee. Blazer used his position to extract bribes from countries hoping to host tournaments and broadcasters hoping to cover the proceedings.

Blazer and his FIFA henchmen used the proceeds from those bribes to live like kings. He charged $29 million on his expense account credit cards and pocketed another $20 million more. He grew, literally, to 450 pounds — he got so big he needed a collection of motorized scooters to navigate his homes in Miami, the Bahamas, and New York’s Trump Tower, where he kept not one but two apartments: an $18,000/month three-bedroom unit for himself, and a $6,000/month one-bedroom unit, right next door, for his cats. (Apparently, crime really does pay. Until it doesn’t.)

Blazer even kept a blog bragging about his travels and his life. Apparently, however, he was too busy partying to pay taxes on the profit he made from selling his organization’s integrity. In 2011, agents from the IRS and FBI stopped him while he was riding his scooter on Fifth Avenue. And right there, they presented him with a stark choice: “We can take you away in handcuffs now — or you can cooperate.” Turns out they wanted more than just a few million in back taxes. They wanted to “flip” him, to secretly record conversations with crooked soccer officials from across the world. Those tapes, which he recorded using a specially-modified key chain, helped lead to last week’s arrests.

IRS Criminal Investigation head Richard Weber made the obvious pun after the arrests, announcing “This is the World Cup of fraud, and today we are issuing FIFA a red card,” he said. But really, the headlines just write themselves. How about “Corrupt soccer officials just couldn’t keep their hands off the cash”? Maybe “Co-conspirators headed to jail for terms up to 20 years”? How about “Prosecutors score a GOOOOOOOAAAAAAALLLLLLLL against corruption”? (Sometimes we crack ourselves up.)

Most Americans don’t get fired up about soccer. But they do get excited about tax savings. If you need extra help guarding the net against IRS strikers, call us for a plan. Who knows . . . you might even save enough to afford an apartment for your cats, too!

← Stop Overpaying Your Taxes - The Law Practice Doctor Who Won Most at Roland Garros? →