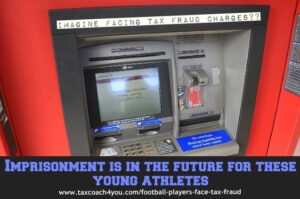 College football fans have been crying for a season-ending playoff tournament for years, to replace the invitational “bowl championship” series that usually prompted as many questions as it answered. Monday night they got their wish, as the third-string quarterback Cardale Jones and the Ohio State Buckeyes overcame four turnovers to stun the Oregon Ducks, 42-20, in the very first College Football Playoff Championship Game.

Somewhere lower in the college football hierarchy, the University of South Dakota Coyotes aren’t anyone’s idea of national champions. They didn’t even play Division I ball until 2008, when they joined the Missouri Valley Football Conference. This year’s squad eked out just two wins, against William Penn’s Statesmen and Northern Arizona’s Lumberjacks. But one group of players took an even tougher hit. And their opponents weren’t even wearing pads or cleats! What happened? Well, they challenged the team at the IRS — and they got thrown for a big loss.

Alphonso “Rico” Valdez grew up in Tampa, Florida, and graduated from Chamberlain High School before heading to the prairie to play cornerback for the ‘Yotes. Maybe he felt exploited, playing for scholarship money instead of cold hard cash. But he didn’t have the chops to go pro. So he recruited his own team of 11 conspirators, picking up some of his USD teammates, a former student government president who had been impeached for misusing student funds, and some friends from back home. Together, the group collected random names, addresses, and Social Security numbers, then used that information to file false tax returns on behalf of the victims and request fraudulent refunds in the form of prepaid debit cards.

We’re not sure if any of the conspirators majored in accounting or not, but either way, pre-law probably would have been a smarter choice. The scheme came to light on a warm April day in 2012, when the criminal mastermind Valdez traded his helmet for sunglasses and a stocking cap, then made trip after trip to an ATM to convert those cards into cash. A concerned citizen noticed his unsportsmanlike conduct and called local police, who used surveillance video to pull the first string that eventually unwound the entire scheme.

The team scored $421,000 over the course of their “season” before officials threw a flag. Prosecutors don’t know what happened to the money — they say there were no Mercedes-Benzes, no Louis Vuitton, and no Tiffany jewelry. USD athletic director Dave Herbster said “I’m not even sure that any of them had a car while they were here, and if they did, it probably wasn’t a nice one.”

At least they had the good sense to plead guilty to various charges of conspiracy and identity theft, and save real taxpayers the cost of a trial. They’re even saying they’re sorry! Valdez wants to become a high school football coach and show children they can further their education despite their mistakes. His girlfriend, Melissa Dinataly, said “the world is corrupt enough as it is. I shouldn’t have done this.” Of course, these aren’t five-yard penalties — the whole team is headed to jail, for terms ranging from two to five years. They say prison life is structured — more than some people care for! So we’ll see if the same discipline that helped Valdez excel on the field helps him excel in the yard.

Football fans are all familiar with the maxim that “offense sells tickets; defense wins championships.” When it comes to your finances, the same rule holds true, and smart tax planning is the key to your financial defense. So call us to get the game plan you need to pay less tax — and remember, we’re here for your teammates, too!

← A Story Of Making Something Amazing From Losing Almost Everything The Most Wonderful Time of The Year? →